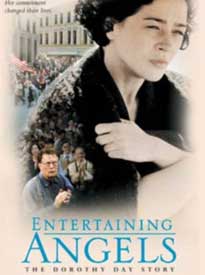 The last movie in St John Vianney’s Fall Film Series is “Entertaining Angels:The Dorothy Day Story.” This 1996 biopic explores a period in the life of Dorothy Day (Moira Kelly), who dedicated herself in service to her socialist beliefs and her adopted faith of Catholicism. The Catholic Worker Movement she created continues to thrive to this day, with more than 200 communities across the United States and another 28 communities abroad.
The film covers Day’s pre-Catholic life in 1917 as a suffragist and writer for the old New York socialist newspaper, The Call, and proceeds through to the Depression-era 1930s. With Peter Maurin (Martin Sheen), she starts The Catholic Worker newspaper and sets-up the first Catholic Worker soup kitchen.
A panel discussion will follow. The FREE screening begins at 6:15 PM on Thursday, October 28. For more info, contact Connie McDonald at 864-4166 x204 or SJVGoodNews@gmail.com. Popcorn and drinks will be available.