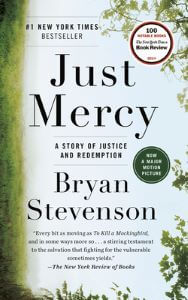 Brother Frank Hagerty, SSE will be facilitating the Zoom meetings once a month beginning on January 21, 2021 with a final session on June 17, 2021. All sessions will begin at 7:00 PM. Plans are also in the works to sponsor a screening of the movie based on the book, once the study has finished.

Mr. Stevenson is a lawyer who founded the Equal Justice Initiative, an organization which helps people on death row. Just Mercy is primarily about one of his clients, but contains information about our criminal justice system, the death penalty, and racial injustice. It also illustrates how unjust the death penalty can be. Pope Francis has written “the Church teaches, in the light of the Gospel, that ‘the death penalty is inadmissible because it is an attack on the inviolability and dignity of the person,’” (Catechism of the Catholic Church), echoing calls from Pope Benedict XVI and Pope John Paul II for the abolition of its use.

Saint John Vianney Church will have copies of the book available for $10/copy. For more information, to make arrangements to pick up a copy of the book, or to join us, please contact Connie McDonald at SJVGoodNews@gmail.com.