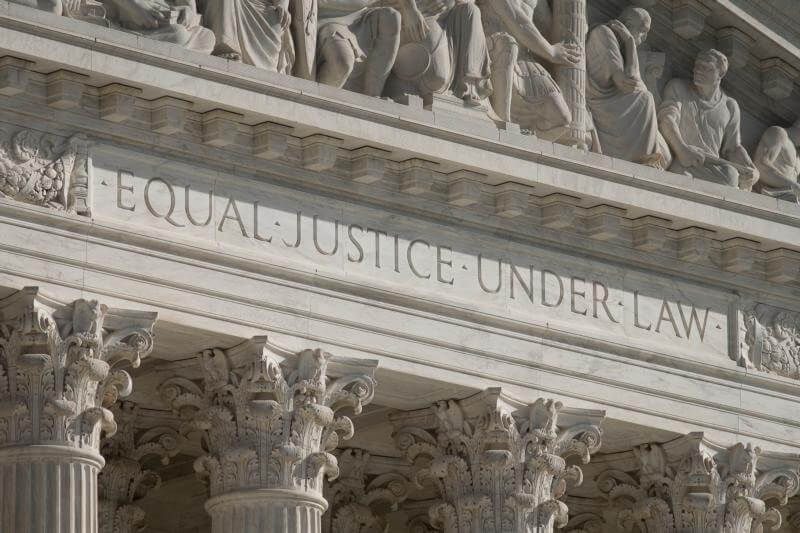 “That’s a wrap” could have been said late morning June 27 at the U.S. Supreme Court after the court issued its last two decisions of the term.

Except that it was not a wrap by a long shot.

Just a few hours after the court released its final decisions, longtime Justice Anthony Kennedy announced his retirement, which immediately got wheels of speculation spinning about his potential replacement and what that would mean for the future balance of the court.

Almost immediately, President Donald Trump said he would move quickly to fill the spot, saying he already has a list of candidates in hand.

And the day after this announcement, the court released another handful of cases on the docket for its next term that begins Oct. 1.

But before all attention shifts to the next session, there is still plenty to review from the court’s term that just ended — a busy nine months with more than 75 cases argued, and decided on, by the court.

Catholic Church leaders weighed in on many of these cases, submitting friend-of-the-court briefs and issuing statements after the decisions were announced. Catholic newspaper editorials addressed sports betting and Catholic advocates spoke up on the court’s actions on the death penalty.

The court, near the end of this term, announced its 5-4 decision upholding Trump’s travel ban preventing people entering the U.S. from some Muslim-majority countries.

The U.S. Conference of Catholic Bishops, Catholic Charities USA and Catholic Legal Immigration Network expressed disappointment with the ruling and also had filed a combined friend-of-the court brief with harsh criticism of the president’s order, saying it showed “blatant religious discrimination” and was a major threat to religious liberty.

In the case of the same-sex wedding cake, the U.S. bishops sided with the court’s 7-2 decision in favor of the Colorado baker who cited religious beliefs in declining to make the wedding cake for a same-sex couple. The narrow ruling said the baker’s religious freedom had been violated by the state’s Civil Rights Commission, but it did not determine if a small business can invoke federal free-speech and religious-exercise rights to deny services to same-sex couples.

The Catholic bishops also sided with the court’s 5-4 ruling that a California law requiring pregnancy centers to tell patients about the availability of state-funded abortion services violated the First Amendment. They disagreed with the court’s 5-4 decision in the case about union dues where the court overruled its previous decision allowing state agencies to require their union-represented employees to pay fees to the union for collective bargaining costs even if they are not union members.

One case that might have seemed under the radar for Catholic leaders was the 6-3 ruling that cleared the way for states to legalize sports betting, striking down a 1992 federal law, but editorials in at least two Catholic archdiocesan newspapers warned about some potential dangers of this decision.

In a death penalty case, the Supreme Court unanimously ruled in favor of a Texas death-row inmate, ordering a federal appellate court to reconsider his requests for funding to investigate his claims of mental illness and substance abuse. This decision, along with the statements made when the court announced it would not take up the case of an Arizona death-row inmate challenging the state’s capital punishment law, shows the court is taking notice of flaws in the death penalty, said Karen Clifton, executive director of Catholic Mobilizing Network.

In its next session, the court already has agreed to three death penalty cases.

In other abortion decisions, the justices threw out a lower court’s ruling that allowed a 17-year-old last year to obtain an abortion while she was in a detention center after an illegal border crossing. The court also said it would not hear a case against an Arkansas abortion law, thus letting the state’s restrictions on abortion-inducing drugs stand.

As the court catches its breath from the end of the busy term and awaits the transition period of its replacement for Kennedy, many of the justices will at least be able to get away from Washington with temporary teaching posts.

The scotusblog, a blog about the Supreme Court, reports that Justice Ruth Bader Ginsburg will be a guest lecturer in Rome for the summer law program of Loyola University Chicago and Justice Neil Gorsuch will teach two courses in national security law for the Antonin Scalia Law School at George Mason University’s summer session in Padua, Italy. Justice Stephen Breyer is scheduled to give a talk at the Aspen Institute in Colorado in July.