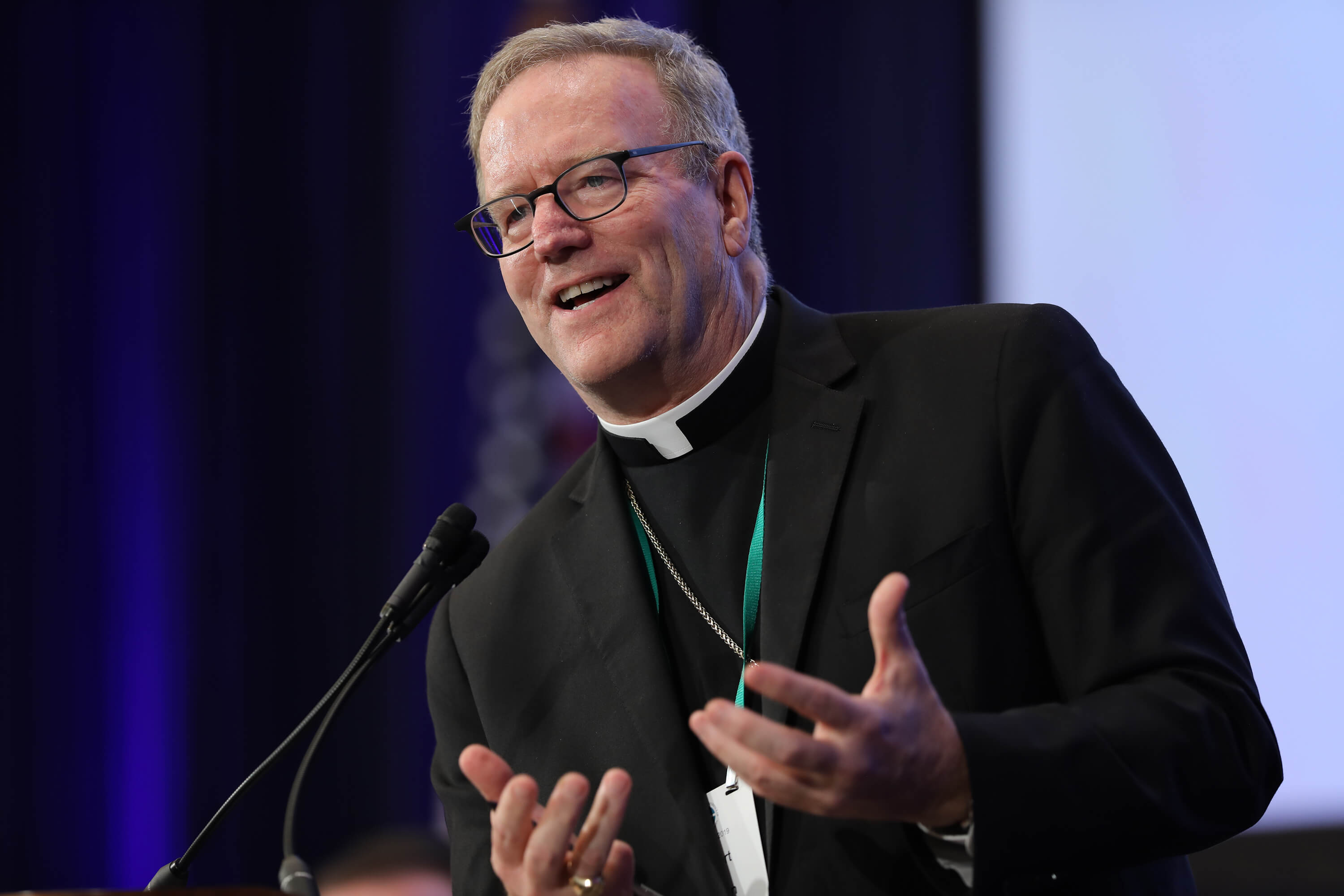 Auxiliary Bishop Robert E. Barron of Los Angeles did not just bemoan the fact many young people are leaving the Catholic Church. He said Church leaders need to make it a priority to bring them back.

The bishop, chairman of the bishops’ , who is known for his website, “Word on Fire,” and for hosting the documentary series “Catholicism,” offered a five-step plan of sorts to bring the religiously unaffiliated, or “nones,” back to the fold.

He said for starters, the church should lead with its social justice work, getting young people involved with caring for those in need, working in soup kitchens, prison ministries, helping the homeless. Leaders can reinforce this by reiterating messages on social justice from Popes Leo XIII to Francis.

From there, the church should promote its own writers and artists to show people the beauty of the Catholic faith, he said.

Another key step — and he said he’s been “banging this drum for a long time” — is to stop dumbing down the faith. The bishop, who first brought up this issue of church exodus with the bishops at the spring meeting, said young Catholics, or those of any age, should be able to articulate why they believe what they do.

For starters, “we have to beef up the intellectual content of our religion classes in Catholic schools, our religious education programs, RCIA, confirmation preparation, etc., ” he said.

From his own experience, he said he has been asked very basic questions, particularly on the “AMA” (Ask Me Anything) feature on Reddit, an internet news aggregator, about faith, including: “Who is God and can you prove he exists? Can you explain evil and how do you know that your religion is right?”

He said it “breaks your heart to realize we haven’t communicated our tradition effectively,” but that doesn’t mean throwing in the towel. Instead, the work begins locally: in one’s parish.

On the parish level, Catholics need to start recognizing that their parishes are not just places where they experience the sacraments, but they should be seen as missionary grounds. This especially holds true with reaching out to young people because as he put it: “Young people aren’t going to come to us; we have to go out to them.”

This idea of going out to people is very much in line with Pope Francis’ message of accompaniment, he added.

The bishop’s last point was about using social media to turn this trend around stressing: “We should invest lot of time and money to get really good people to work our social media, suggesting that parishes, or even groups of parishes, hire someone to do effective social ministry outreach.

His presentation prompted more than one hour of discussion from the floor with bishops all in agreement that the drop in church numbers is a deep concern and offering other possibilities to combat it from increased devotion to Mary to opportunities for mission work or strengthening catechetical programs.

The bishop brought three lay leaders to the podium to help with the discussion, including Brandon Vogt, author and content director for “Word on Fire,” who echoed the bishop’s point that young people leaving the church is a “huge crisis.”

For every one person who comes into the church, six and a half walk out the back door, he said re-emphasizing the need not only to plug the hole but to “look for those who left.”

He also suggested that just as parishes and dioceses have staff members working on abuse situation, someone should be working at the local level just to reach out to those who left the church. “If it’s a priority, lets emphasize it with resources,” he added.

In a news conference after the presentation, Bishop Barron said he wasn’t surprised by the lengthy conversation about bringing people back to church because when he first brought up this topic last spring, he said he was supposed to have 10 minutes and it went an hour.

Yes, there was a lot to take up, but we have to do it, he said, emphasizing that an individual’s relationship with the Lord needs to be integrated into the life of the church.

The Franciscans are no strangers to either the Holy Land or its dangers, and their story there [...]