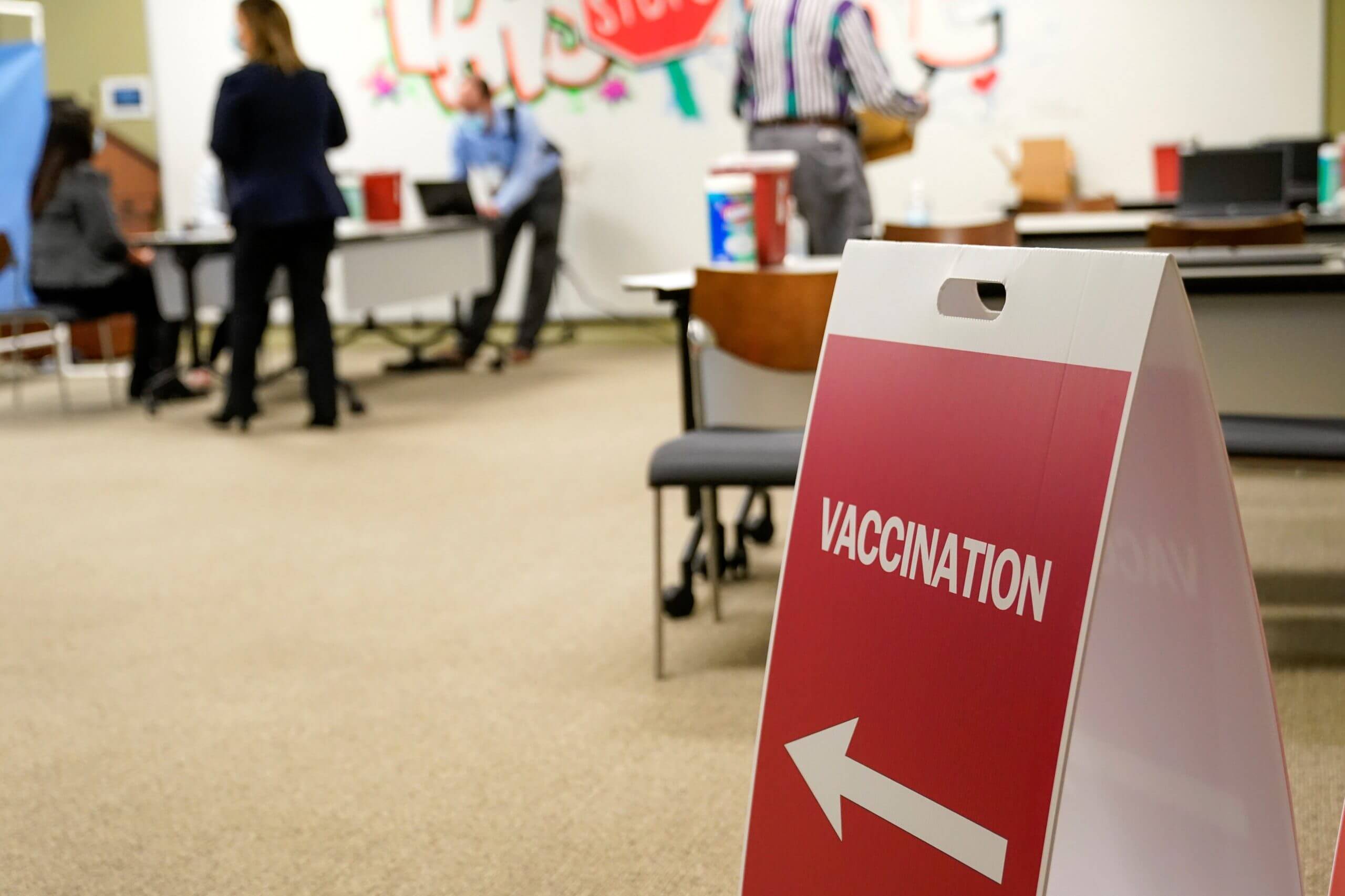 Photo Credit: CNS/Bryan Woolston, Reuters - A sign directs health care workers to a rehearsal for the administration of the Pfizer coronavirus vaccine at Indiana University Health in Indianapolis, Indiana, Dec. 11.

Bishops: Getting Covid-19 vaccine is ‘act of charity,’ supports the common good

The “gravity” of the ongoing Covid-19 pandemic and “the lack of availability of alternative vaccines,” are “sufficiently serious” reasons to accept the Pfizer/BioNTech and Moderna vaccines, the chairmen of the U.S. bishops’ doctrine and pro-life committees said Dec. 14.

“Receiving the Covid-19 vaccine ought to be understood as an act of charity toward the other members of our community,” they said. “In this way, being vaccinated safely against Covid-19 should be considered an act of love of our neighbor and part of our moral responsibility for the common good.”

The bishops addressed the moral concerns raised by the fact the Pfizer and Moderna vaccines have some connection to cell lines that originated with tissue taken from abortions.

However, this connection to morally compromised cell lines is so remote and the public health situation is too grave to reject the vaccines, said Bishop Kevin C. Rhoades of Fort Wayne-South Bend, Indiana, chairman of the U.S. Conference of Catholic Bishops’ Committee on Doctrine, and Archbishop Joseph F. Naumann of Kansas City, Kansas, chairman of the USCCB’s Committee on Pro-Life Activities.

Late Dec. 11, the U.S. Food and Drug Administration gave emergency-use approval to the Pfizer vaccine, with approval expected for Moderna the week of Dec. 14. UPS and FedEx began shipping the doses across the country Dec. 12, with the first shipments arriving Dec. 14.

Each state has a distribution plan for administering them. National guidelines call for health care workers and those in nursing homes and long-term care facilities to be first in line to get immunized.

On Dec. 8, The Lancet medical journal reported that four clinical trials of a third vaccine, being developed by the University of Oxford and AstraZeneca “appears to have moderate efficacy in preventing symptomatic illness, and may significantly reduce hospitalization from the disease.” Astra Zeneca is expected to apply to the FDA for emergency use of its vaccine in the coming weeks.

Bishop Rhoades and Archbishop Naumann said they found the AstraZeneca vaccine it to be “more morally compromised” and concluded this vaccine “should be avoided” if there are alternatives available.

“It may turn out, however, that one does not really have a choice of vaccine, at least, not without a lengthy delay in immunization that may have serious consequences for one’s health and the health of others,” the two prelates stated. “In such a case … it would be permissible to accept the AstraZeneca vaccine.”

Shortly after Pfizer and Moderna announced Nov. 11 and Nov. 16, respectively, that their vaccines were 95% effective against COVID-19, critics claimed the vaccines have been produced using cells from aborted fetuses, leading to confusion over “the moral permissibility” of using these vaccines.

Bishop Rhoades and Archbishop Naumann addressed this issue in a Nov. 23 memo to their fellow bishops and addressed it again in their 2,400-word statement Dec. 12. In the memo they noted some were “asserting that if a vaccine is connected in any way with tainted cell lines, then it is immoral to be vaccinated with them. This is an inaccurate portrayal of Catholic moral teaching.”

In their new lengthy statement, the two committee chairmen emphasized that any such cell lines were derived from tissue samples taken from fetuses aborted in the 1960s and 1970s and have been grown in laboratories all over the world since then.

“It is important to note that the making of the rubella vaccine — or that of the new Covid-19 vaccines — does not involve cells taken directly from the body of an aborted child,” Bishop Rhoades and Archbishop Naumann said. “Cells taken from two abortions in the 1960s were replicated in a laboratory to produce two cell lines that can be reproduced again and again, indefinitely.”

“To make the rubella vaccine, cells from these cell lines are stimulated to produce the chemicals necessary for the vaccine,” they explained. “It is not as if the making of the vaccine required ever more cells from ever more abortions.”

The two committee chairmen said the Vatican, through the Congregation for the Doctrine of the Faith and the Pontifical Academy for Life, “has offered guidance on the question of whether it is morally acceptable to receive a vaccine that has been created with the use of morally compromised cell lines.”

Both the congregation and the academy “emphasize the positive moral obligation to do good,” they said, “and in so doing to distance oneself as much as possible from the immoral act of another party such as abortion in order to avoid cooperation with someone else’s evil actions and to avoid giving scandal, which could happen if one’s own actions were perceived by other people to ignore or to minimize the evil of the action.”

“Our love of neighbor should lead us to avoid giving scandal, but we cannot omit fulfilling serious obligations such as the prevention of deadly infection and the spread of contagion among those who are vulnerable just to avoid the appearance of scandal,” the two prelates said.

At the same time, the bishops also cautioned Catholics against complacency about the moral issue of abortion and ethical issues surrounding the development of some vaccines.

“While having ourselves and our families immunized against Covid-19 with the new vaccines is morally permissible and can be an act of self-love and of charity toward others, we must not allow the gravely immoral nature of abortion to be obscured,” Bishop Rhoades and Archbishop Naumann said.

“One might become desensitized to the gravely evil nature of that action. One might become complacent about that action and ignore the obligation to do what one can to oppose the evil action,” they said, adding that others might see “one’s acceptance of benefits from an evil action” and feel the action isn’t really evil, feel less urgency “to oppose that evil” or even miss opportunities to do what they can “to oppose it.”

“We should be on guard so that the new Covid-19 vaccines do not desensitize us or weaken our determination to oppose the evil of abortion itself and the subsequent use of fetal cells in research,” Bishop Rhoades and Archbishop Naumann said.

Editor’s Note: The full text of Bishop Rhoades and Archbishop Naumann’s statement can be found online at usccb.org/moral-considerations-covid-vaccines.Covid-19