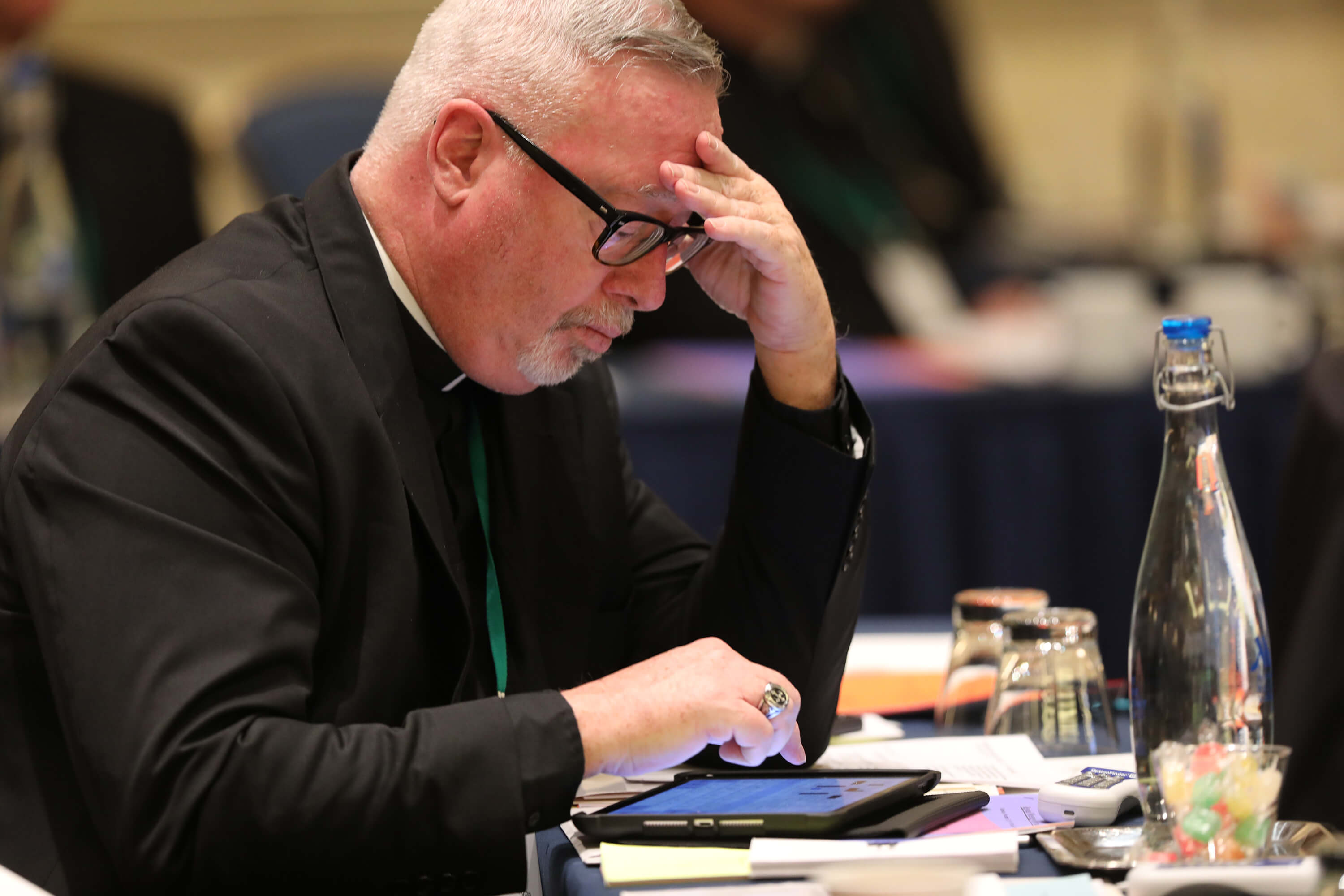 Bishops vote to revise strategic priorities for the early 2020s

The U.S. bishops voted overwhelmingly Nov. 11 in Baltimore on a revised set of strategic priorities to take them into the next decade.

The vote was 214-4 to adopt the new set of strategic priorities and plans for 2021-24, with two abstentions. It was the first vote recorded during the U.S. Conference of Catholic Bishops’ fall general meeting.

Before the vote, the document was presented to the body of bishops by Archbishop Allen H. Vigneron of Detroit, chairman of the USCCB Committee on Priorities and Plans.

When they met in June, the bishops gave their provisional OK to development of a new set of strategic priorities for 2021-24. The June vote allowed committees, secretariats and departments of the USCCB to continue work on how to carry out the priorities.

The expectation is that the 2021-24 priorities would be implemented at the USCCB’s November 2020 meeting.

For this year’s vote, a simple of majority of bishops present and voting was needed for passage.

A working group of bishops under the aegis of the USCCB Committee on Priorities and Plans — following two rounds of consultations with the bishops, one round with the USCCB’s National Advisory Council, with recent input from five USCCB standing committees — identified four priorities:

Since June, the wording was tweaked slightly for one of the priorities. For “Evangelization: Form a joyful band of missionary disciples of Jesus Christ,” the phrase “of Jesus Christ” is new.

The other three priorities are: “Life and dignity of the human person: Serve the common good as the leaven in a free society”; “Protect and heal God’s children: Restore integrity, foster virtue”; and “Vocations: Equip all Christ’s disciples for mission.”

Within each priority there are four to six emphasis points, some of which also received some tweaking.

— “Evangelize a culture in need of hope, especially the religiously unaffiliated.”

— “Foster an evangelizing focus in catechesis and Catholic schools.”

— “Offer our society an account for the hope that is within us.”

Under human life and dignity:

— “Protect and defend the dignity of migrants and refugees, of the poor and those on the peripheries.”

— “Defend the right to life for all people especially the unborn, elderly, sick, dying and persons with disabilities; and fight the advance of abortion, infanticide, assisted suicide, euthanasia, violence and the death penalty.” Here, “violence” has been added.

— “Defend and secure religious liberty and freedom of association.”

— “Articulate a convincing anthropology of the human person, male and female, as proclaimed by faith and affirmed by science and right reason.”

Under protect and heal God’s children:

— “Maintain and strengthen safe environments through sound policies and procedures.” Originally, it had begun with “Create and maintain.”

— “Extend and ensure effective collaboration with the laity.”

— “Cultivate an ever-deepening spirituality of chastity and other virtues.” “Other” was added; “virtues” plural is new.

— “Nurture courageous and transparent leadership.” “Reflection” had appeared in the version issued in June.

— “Accompany survivors and embrace their witness.”

— “Prepare for and sustain the living-out of marriage and family life.” Archbishop Vigneron said the adding of a hyphen between “living” and “out” was “monumental,” as otherwise, as some bishops had suggested, the bishops might have implied that they were encouraging couples to live “outside of marriage.” “No detail is too important,” he added.

— “Create a culture that nurtures consecrated life and holy orders.”

— “Encourage the laity in their mission to evangelize society and transform it through the grace of word and sacrament.” The “transform” phrase is entirely new.

According to USCCB statutes, their strategic plan is to be reviewed and revised as needed every four years.

The process got under way during the USCCB fall general meeting last November, where bishops in their regional meetings were asked to give input on strategic priorities for 2021-24, and an electronic survey distributed to bishops last January.

Included in the document on the priorities was a message from Archbishop Vigneron to his fellow bishops — he used all-caps to make his case that one priority was not more important than the other.

The revised priorities “are not listed in priority order. It follows then that any inference of prioritization is neither intended or supported by basis of fact,” he said. “Instead, the listed order of strategic priorities and emphasis areas serves only to provide a framework for referencing them in committee, subcommittee and department operational plans and in future evaluations.”

With the approval of the priorities and plans, USCCB committees, secretariats and departments will continue developing draft operational plans; that work began in July. Starting in February through June 2020, the Committee on Priorities and Plans and the USCCB general secretariat will conduct a review of the draft strategic plan.

USCCB Executive Committee review and approval will take place between July and September 2020. In November 2020, the full USCCB will conduct a vote on whether to approve the 2021-24 priorities.