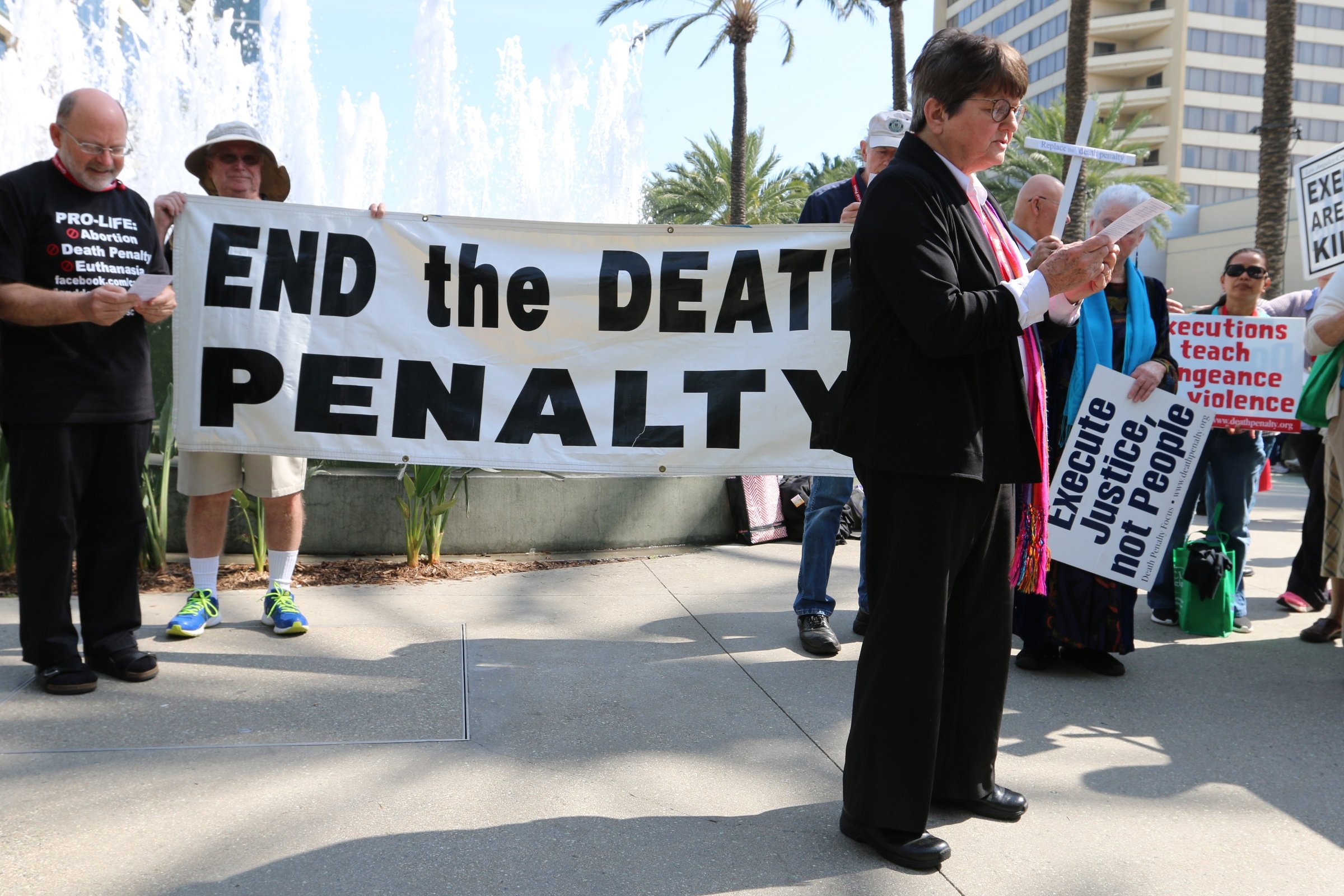 Photo Credit: CNS/J.D. Long-Garcia, The Tidings - Sister of St. Joseph Sister Helen Prejean is seen in Anaheim, California, calling for an end to the death penalty in this 2016 file photo.

‘Can’t not do it,’ says Sister Prejean of her fight to end death penalty

Sister Helen Prejean, a Sister of St. Joseph, shows no signs of slowing down in her long-standing fight to end the death penalty.

At 83, she is writing her fourth book while directing her advocacy organization, Ministry Against the Death Penalty, in New Orleans.

She spends a fair amount of time on the road as she continues to give talks, especially on college campuses, about the injustices she sees with capital punishment. She also continues to minister to both death-row inmates and murder victims’ families.

She has accompanied six men to their executions.

When asked by Catholic News Service in a Sept. 30 interview where she gets her energy, her responses all revolved around the work she does.

For starters, she said she is energized by those she ministers to on death row — currently a Louisiana inmate in his 60s, Manuel Ortiz. The Salvadoran has been on death row for close to 30 years and continues to claim innocence for the sentence he received for hiring someone to murder his wife. Sister Helen said Ortiz is a prayerful man with a great devotion to Our Lady of Guadalupe.

“How does he get up every morning in that cell 30 years now? How does anybody do that?” Sister Helen asked. She said she comes away more enlivened from every visit with him and is also overwhelmed by what he goes through — “knowing you’re innocent, knowing the lies they told about you in trial.”

His case, along with the 690 people currently on death row in this country, remind her “we’ve got our work cut out for us,” she said in her understated way. Her Louisiana drawl almost belies the urgency of the work she sees ahead.

Her passion for both the innocent and the guilty on death row — who all have God-given dignity, she points out — has been her driving force ever since she witnessed her first execution in 1984: the electrocution of Patrick Sonnier, a 34-year-man found guilty of killing two teenagers.

Sister Helen first came to know Sonnier as a pen pal, when she volunteered to write to someone on death row. From that correspondence she later became Sonnier’s spiritual adviser.

She has often referred to her decision to write to someone on death row as a move of “Sneaky Jesus,” saying Jesus sneaks up and draws you into doing something that seems small but in the end becomes life changing.

Because Sonnier wanted Sister Helen to be with him and to pray for him at his execution, Sister Helen agreed. But really, nothing could have prepared her for what she witnessed.

“What I saw set my soul on fire, a fire that burns in me still,” she wrote in her memoir, “River of Fire.”

After leaving the prison, in the middle of the night, she said she threw up in the parking lot. But from that day forward, she knew that she had to do something about what she had seen.

As she put it: “Our faith awakens and we speak.”

“I knew very few people were going to get this opportunity ever to be in (the execution chamber). I’m the witness,” she said, adding that she began to speak with whoever would listen.

At first, she encountered a lot of criticism with people shouting things at her like: “What do you know? What’s your authority? The Catholic Church upholds a right of the state to take life!”

She didn’t back down though.

So she has stayed in there, and continues to do so, for nearly four decades. Starting with parish talks and then moving on to writing “Dead Man Walking” and speaking to St. John Paul II and Pope Francis about death penalty wrongs.

“Have to do it. Can’t not do it,” she said of her personal crusade.

The woman religious who grew up in Baton Rouge, Louisiana, entered the convent at 18 and spent years teaching in Catholic schools, has not held back in recounting details of what she has seen in state prisons in prisoners’ final moments.

In 1997, she told St. John Paul that she has walked behind a man on his way to be executed, with legs shackled, hands cuffed to a belt and surrounded by guards who whispered to her: “Please pray as I make this walk that God holds up my legs.”

“Where is the dignity in taking a human being and rendering them completely defenseless and killing them?” she said she asked the pope. “How do we respect the inviolable dignity even of the guilty? Can you help our Church? Can you help us?”

And he did help, she said, in a 1999 visit to St. Louis where he described the death penalty as both cruel and unnecessary and said: “Modern society has the means of protecting itself, without definitively denying criminals the chance to reform.”

His 1995 encyclical, “Evangelium Vitae” (The Gospel of Life”), the pope spoke against the death penalty but he included the caveat that it could be used if absolutely necessary to defend society. Sister Helen said that phrase made her heart drop because she knew those words would be used by anyone who wanted to sentence someone to death.

There’s no doubt Sister Helen was pretty happy that day. But by no means did she just take a break afterward.

She knows there is still plenty of support in the U.S. for capital punishment, even as some states are abolishing it, and that Catholics are not much different from the general public in their death penalty views.

A 2021 poll by Pew Research shows that 60 percent of U.S. adults favor the death penalty for people convicted of murder, including 27 percent who strongly favor it. It also showed Catholics falling into that same bracket with 58 percent of them generally supportive of capital punishment, with 27 percent strongly favoring it.

When asked how to reach people in the pews, Sister Helen said they need to learn about the death penalty in Catholic schools and parish adult education program.

She says she is hardly alone in her advocacy but part of a broader movement. She likens it to “a pot that begins to boil and these little bubbles start at the bottom and they start rising up. Well, I was one of those little bubbles.”

And even now, the work doesn’t get old for her.

“There’s a great life when you feel you’re fulfilling your purpose,” she said, adding that she is glad to be awake to today’s social injustices even though she said it took 40 years to happen.

“It’s a great grace to be awake and then to be engaged in soul-sized stuff,” she said. “Bring it on.”