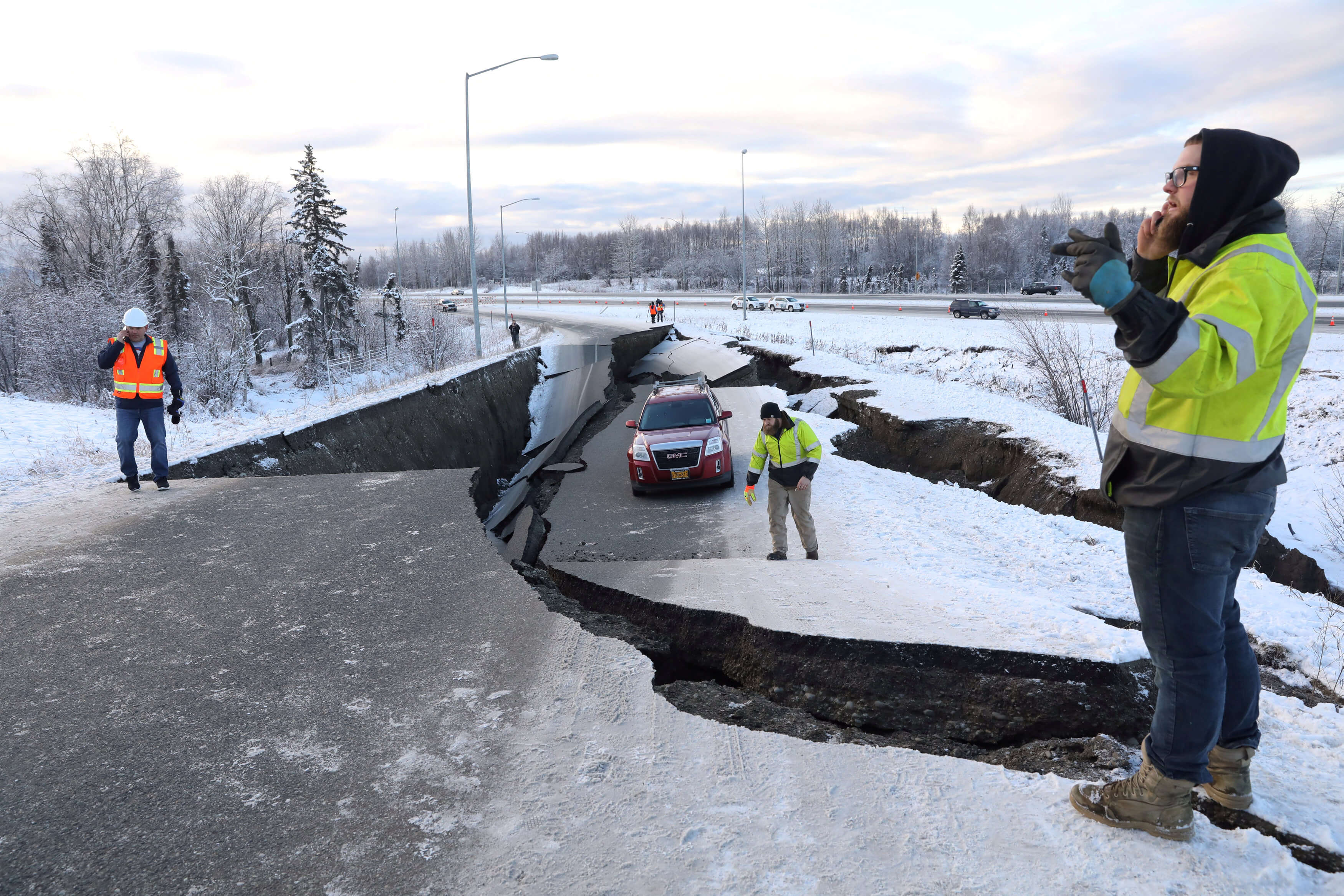 Photo Credit: CNS/Nathaniel Wilder, Reuters - First responders stand on a collapsed roadway near the airport after a magnitude 7.0 earthquake Nov. 30 in Anchorage, Alaska.

Hurricane, fire, flood and even earthquake, Catholic Charities agencies did their best to help thousands of their fellow residents through some of the worst natural disasters they had ever encountered.

Some of the disasters were so severe the relief work continues.

Hurricane Michael in October, which caused $8.1 billion in damage and resulted in 50 deaths, required a yeoman effort by Catholic Charities of Northwest Florida to deliver aid to those hit.

Within two days of the hurricane, the agency was able to commandeer a large parking lot and distribute emergency aid, from food to toiletries to gasoline, according to Eva Wise, assistant executive director.

One low-tech key to making it work, Wise said, was a volunteer’s idea of using “window chalk,” the stuff one sees scribbled on the windshields in used-car lots. A car would drive into the lot. An intake worker would ask the occupants what they needed. Based on the reply, the intake worker would write single-letter abbreviations on the windshield: “W” for water, “H” for hygiene kits, even “C” for cat food and “D” for dog food. The driver was then directed to proceed to where other volunteers could furnish the needed supplies.

“It was pretty amazing to see how much people care. That was the positive thing out of all of this,” Wise said. The parking lot distribution site was open seven hours a day, every day, for five weeks. It required, and got, 80-100 volunteers staffing it.

In September, Hurricane Florence pulverized the Carolinas. It was even deadlier than Michael, with 55 deaths attributed to it, along with $13 billion in damage. “It was definitely a bigger and more drawn-out storm than we had experienced before,” said Kelly Kaminski, director of disaster services for Catholic Charities of South Carolina.

Kaminski said the storm’s duration and magnitude “dragged out” Catholic Charities’ response time. “There were areas that were still waterlogged. You would go in on a Wednesday, and by Thursday night they’d need to be evacuated,” she said. “There are houses that are still drying out.”

In all, the Catholic Charities response was nearly eight weeks — far longer than the two to four weeks it typically conducts relief efforts. It taxed Catholic Charities staff and volunteers. “We ended up deploying teams from across the country from Catholic Charities USA,” Kaminski said. “So many of our staff was directly impacted with their (own) houses.”

Wildfires in the West took their toll as well.

The Carr Fire in July in Redding and Shasta, California, wiped out 229,651 acres but also took out 1,604 buildings and resulted in eight deaths.

According to John Watkins, director of Catholic Charities of Sacramento, the Carr Fire was the largest natural disaster they had ever faced. “The Carr Fire was very large. Redding is a city, it’s not countryside. It’s not a huge city, but you don’t think of these asphalt cities to be burning up like that,” he said.

And then came the Camp Fire in November. The total acreage was somewhat less — 153,336 acres burned — but the devastation was far greater: 85 deaths, and 18,804 buildings lost. It ranks as the most destructive fire since 1932, when accurate records started being kept.

So much smoke and charred soot from the fire drifted southward to San Francisco and Oakland, 170 miles away, that residents were walking outside wearing surgical masks the day after the fire started Nov. 8.

Watkins gave credit to the national Society of St. Vincent de Paul, which had trained people on case management. There were 22 at an intake center in nearby Chico, “and they processed well over 3,000 people, giving out hygiene kits, gift cards,” he said. “They got the families started in the recovery process by doing these case management techniques.”

He also lauded Catholic Charities USA. “They have an expertise in doing the relief, technical support, and money, because they collect funds on a national level in a way that we can’t,” Watkins said.

One issue arose because the relief work is being coordinated by the Federal Emergency Management Agency, which is part of the Department of Homeland Security. “We were getting calls from the Mexican consulate: We know there’s (immigrant) people there, but we’re not seeing them,” Watkins said.

Catholic Charities set up a parish-based center “to create a space if they don’t really feel comfortable going to the FEMA center,” Watkins told CNS. The first such effort, Nov. 25, drew about 500 people.

“We’re going to do the same thing Dec. 16. We might be giving out little gifts because it’s close to Christmas,” he said. Catholic Charities had an auxiliary office in Paradise, California, which burned down in the fire. The agency is also working to organize St. Thomas More Parish, “which is in diaspora,” he added, as its facilities also were lost in the blaze.

Nor are natural disasters confined to the contiguous 48 states.

A May 4 earthquake in Hawaii was the biggest to hit the area since 1975. The quake damaged many buildings, caused landslides, and damaged a road, causing it to be shut down. A major eruption of the Kilauea volcano occurred at the same time, sending untold gallons of lava landward, with much spilling out into the Pacific Ocean.

While no deaths or serious injuries were reported, schools were shut down for a week to assess damage, according to Tricia Teasley, director of community relations and development for Catholic Charities of Anchorage.

Damage estimates are unclear so soon after the quake. First-day estimates came in at anywhere from $100 million to $1 billion.

Teasley said the Archdiocese of Anchorage’s properties seemed to have survived the quake fairly well, including two Catholic Charities-run shelters.

Lisa Aquino, Catholic Charities of Anchorage’s director, said this temblor, according to those who were there at the time, was far different from the 9.2-magnitued Good Friday earthquake of 1964, which killed 139 and caused $311 million in damage. “This one wasn’t as scary, because that one went on for five minutes,” Aquino said, but “this one started with a big jolt, so that surprised a lot of people.”

Teasley was still at home when it struck. She ran out her front door to assess the scene. “I’ve been here for 10 years and I don’t scare easily, but I was scared,” she said. Then she saw a neighbor who “came out of his own house and yelled, ‘Holy s-h-i-,'” before remembering who she was talking to, concluded, “d.”

Aftershocks continue deep in the Alaskan earth, but also in residents’ consciousness. Teasley’s son was on the top floor of his school when the quake struck. At home, whenever he feels an aftershock, he “dives under the ping-pong table,” she said. People, Aquino added, are “tired and just stressed out.”