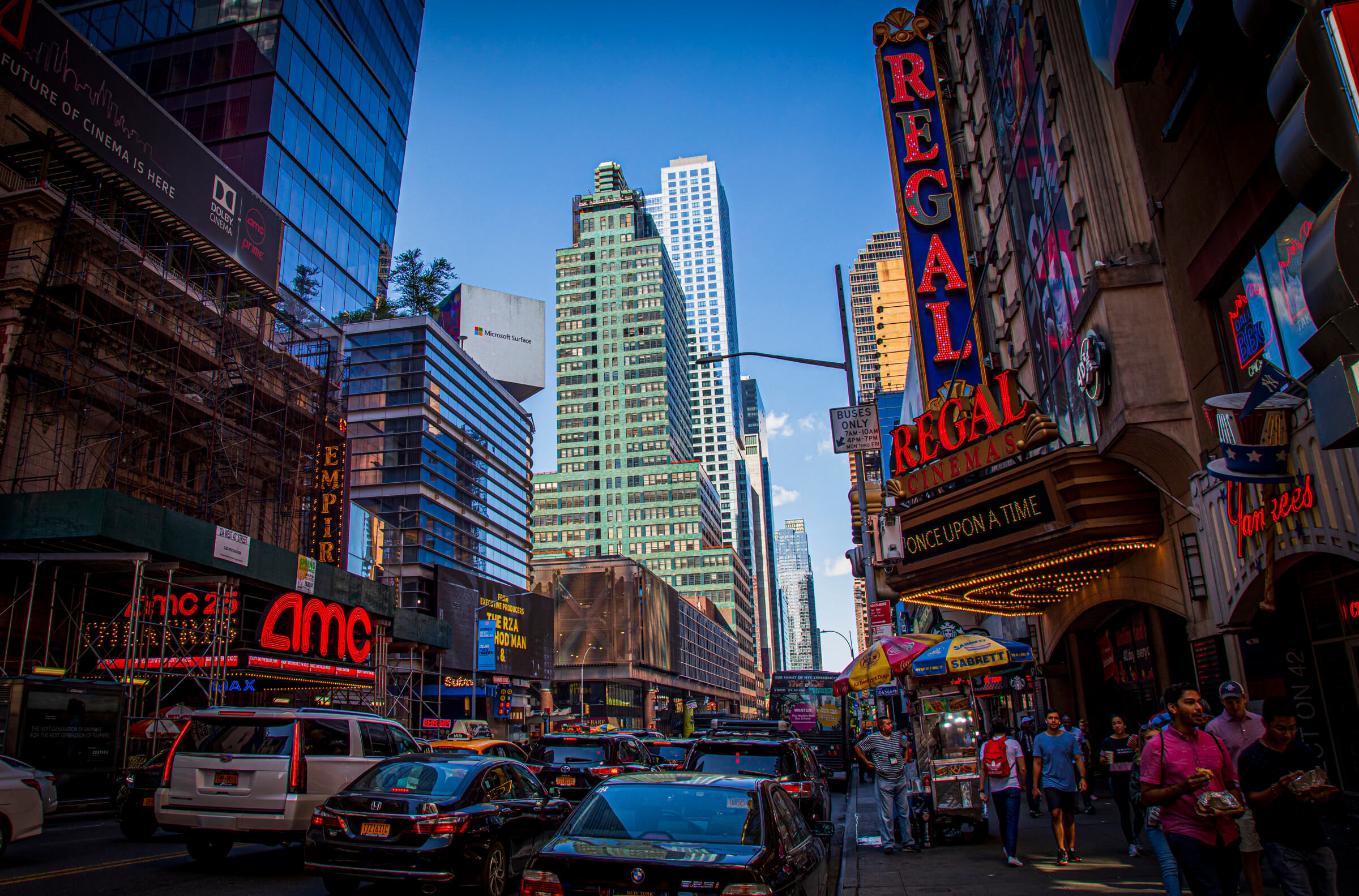 Photo Credit: CNS/Chaz Muth - Pedestrians walk by two iconic movie theaters along New York's 42nd Street — the Regal and the AMC Empire. Since the 1930s the National Legion of Decency — which became the National Catholic Office for Motion Pictures and eventually the Media Review Office of Catholic News Service — has been providing ratings to help the Catholic audience understand the moral content of films.

The once influential Catholic film office had been able to get Hollywood studios to change content in movies it deemed morally offensive for decades, but that power was extinguished as the 1970s rolled into the 1980s.

Social change in the 1960s and the emergence of European and independent films in U.S. movie theaters contributed to the altered tastes of audiences.

The Catholic film office — known as the National Catholic Office for Motion Pictures, or NCOMP, beginning in 1965 — had already made adjustments to its classifications in the 1960s to reflect more leniency when it came to language and sexually suggestive scenes and added movie reviews to evaluate artistic value.

Those modifications appeared to work in the 1960s and 1970s to give the Catholic film office continued advance screenings of films so it could let Hollywood studio chiefs know what they would need to change to avoid an “O (Morally Offensive) rating.”

Jesuit Father Patrick J. Sullivan, who served as the director of NCOMP in the 1960s and 1970s, continued to have some clout with movie producers about moral content.

However, getting studio heads to make the changes was becoming more difficult because they were sensing that the hit they’d take at the box office for an “O rating” was not going to be as severe as it had been in the past, said John Mulderig, assistant director for media reviews for Catholic News Service.

“I remember Pat Sullivan reporting back to us reviewers — with some satisfaction — that he had met with the producers of (the 1967 film) ‘Bonnie and Clyde’ and given them (an) ultimatum,” said Frank Frost, a founder of the U.S. membership affiliate of the International Catholic Organization for Cinema, now known as Signis, and a movie critic for NCOMP from 1964 to 1971.

An early version of the film contained a brief scene where actress Faye Dunaway’s bare breasts were exposed, prompting the meeting between the film’s producers and Father Sullivan.

“He gave them the ultimatum that ‘we’re going to have to condemn this movie'” unless changes were made, Frost told CNS during a September interview at his home in McLean, Virginia. “So, they clipped 10 seconds from the movie and now they could give it an ‘A-IV (Adults, with reservations) rating.'”

There also was discussion about the gory violence depicted in the film, “but the violence didn’t have the same negative reaction from the reviewers and consultants that sex did,” he said.

Movie audiences in the 1970s became more accustomed to limited nudity, suggestive sex scenes and violence and as the decade progressed, fewer producers feared the ‘O’ classification from the Catholic film office.

“As I was leaving NCOMP and on through the ’70s, I think they lost any ability to convince the studios to make any changes or cuts,” said Jesuit Father Kenneth Meehan, who worked as a movie reviewer for the Catholic film office in New York in the 1970s.

The movie studios slowly made fewer of their films available for advance private screenings by the Catholic film office, which by the 1980s was called the Office for Film and Broadcasting.

Eventually those private screenings stopped altogether and movie critics for the Catholic film office had to preview wide-release motion pictures at viewings designated for all reviewers.

“Then we got the announcement of course that our services were no longer needed,” said Bernard F. Dick, a renowned film scholar and author who was a movie reviewer for NCOMP from 1967 to 1981.

However, those movie reviews and classifications continued to be one of the most popular features among CNS subscribers, who to this day run them in their Catholic newspapers and magazines and on their websites.

The Catholic film office became the Media Review Office of CNS in 2010, allowing the mission of reviewing and assessing movies for the artistic and moral value to continue.

The absorption into CNS did not end the office’s apostolate at the service of the bishops and the faithful but did make the reviewing activity more explicitly an operation of the Catholic press.

Readership surveys routinely show that these movie reviews and classifications are essential to many Catholics, who use them as a guide when choosing which films to see, Mulderig said.

The proper balance between a moral classification and a review of the artistic quality of a film can be a difficult one to strike, and there have been occasional controversies over the years. But the office remains a source of advice that Catholic audiences continue to rely on.

The CNS Media Review Office has a mandate to review all wide-release films in the U.S., Mulderig said. “Roughly, that’s any movie showing in 1,000 theaters or more. Beyond that, we have the choice to review films in limited release with a strong religious angle.”

“I still believe that parents want to know about movies to know what their kids can see, and I don’t think that is ever going to change, or at least I hope it never changes because parents really need to be responsible,” Frost said. “They also need to protect themselves spiritually.”