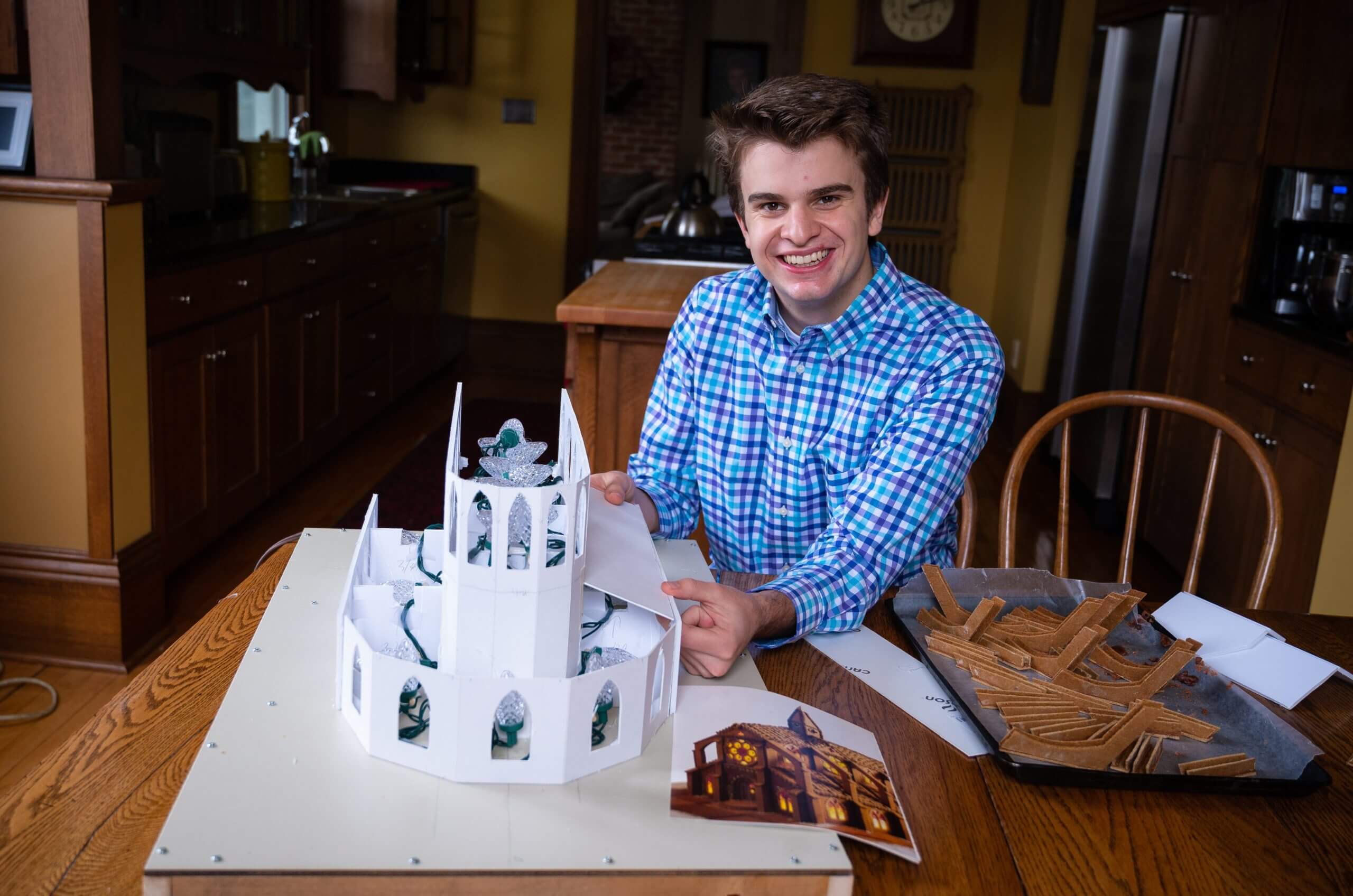 Photo Credit: CNS/Sam Lucero, The Compass - Joel Kierman of Green Bay, Wisconsin, is pictured in his home Dec. 18 with the frame of a gingerbread house depicting the Notre Dame Cathedral. Kierman, a freshman at Stanford University, is building the gingerbread cathedral to raise funds for St. John's Homeless Shelter in Green Bay.

Making gingerbread houses is a Christmas tradition for some families, especially those with German ancestry.

Dating back to the 16th century, and made popular by the German fairy tale by the Brothers Grimm, “Hansel and Gretel,” creating gingerbread houses is even a challenge in the Guinness World Records.

The current world record holder, erected in November 2013 at the Traditions Golf Club in Byran, Texas, spans nearly 40,000 cubic feet. That year, the gingerbread house was used as Santa’s workshop, where visitors met Santa in exchange for a donation to a Catholic hospital.

, a member of St. Matthew Parish in Allouez, Wisconsin, was not looking to break a world record by building a gingerbread but was planning to raise funds for St. John’s Homeless Shelter.

The house was completed on Dec. 21, which also was the deadline for buying raffle tickets for it, bringing in close to $3,890 for the shelter.

Kiernan, a freshman at Stanford University who is studying mechanical engineering, just spent a couple of weeks creating a gingerbread house modeled after Notre Dame Cathedral in Paris. The project came to mind while on break from his studies.

According to Kiernan, his desire to bake a gingerbread house dates back to his childhood.

“When I was younger, my dream profession was to be a chef,” he told The Compass, newspaper of the Diocese of Green Bay. “We had this Christmas cookie cookbook, and there was this one thing on the back, which was a gingerbread version of Notre Dame. They talked about how to make it and had pictures of it.”

Kiernan said he told his mother that one day he would build the cathedral using gingerbread.

“As life and time went along, becoming a chef kind of became something of the past,” he said. “I’m now training to be an engineer at Stanford University, but I still enjoy cooking and baking.”

The pandemic and his holiday break from studies motivated Kiernan to revisit the gingerbread project, he said.

“With Covid, I have a pretty long winter break,” he said. “I ended (classes) before Thanksgiving, and I don’t start until after Christmas, so I was just kind of thinking, ‘Well, what am I going to do with my time?’ I can’t just sit around for seven weeks.”

That is when it hit him: “I can make an ambitious gingerbread house. I can make that gingerbread cathedral,” he said he told himself.

However, Kiernan said he did not want to begin the project just for the sake of doing it. “I said, ‘I’m not going to spend hours and hours on building the thing just so I could look at it for a couple of more weeks. … I wanted it to mean something bigger.”

St. John’s Homeless Shelter, which has been serving Green Bay’s homeless population since 2007, “just kind of popped into mind,” he said.

“There was some corollary with a gingerbread house and people who are homeless,” he said. So he contacted the shelter to see if his project could be something worthwhile for the shelter.

Alexa Priddy, director of community engagement at the shelter, loved it, Kiernan said. “So we kind of very collaboratively designed this whole idea of how to publicize it, with daily updates.”

He told The Compass there were “challenging points” to the project, but during his last quarter of school he was doing “calculus problems that require a certain amount of attention to detail.”

This transferred “over decently” to the gingerbread project, he said. “How to properly roll out gingerbread is actually somewhat of a learning curve, but after doing that for three or four days, I feel like a gingerbread expert.”

The son of Dan and Rose Kiernan, Joel has three siblings and graduated from Green Bay East High School in 2019.

He took a gap year before entering college to travel to China. The experience was cut short due to the COVID-19 outbreak, which began in China, requiring him to return home in January 2020.

Joel Kiernan said his faith has helped him understand the importance of caring for others. Partnering with St. John’s Homeless Shelter is just an extension of living out his faith, he said.

“What I have come to appreciate … about faith and religion is that it’s about looking out bigger than just yourself. It’s looking out for the other person, kind of seeing the face of Jesus in every person,” he said.

“I think that definitely has been a reason why I do projects like this,” he added. “I’ve done other projects, too, and religion plays a big role in that, just in terms of aspiring to look out beyond yourself and trying to help others.”