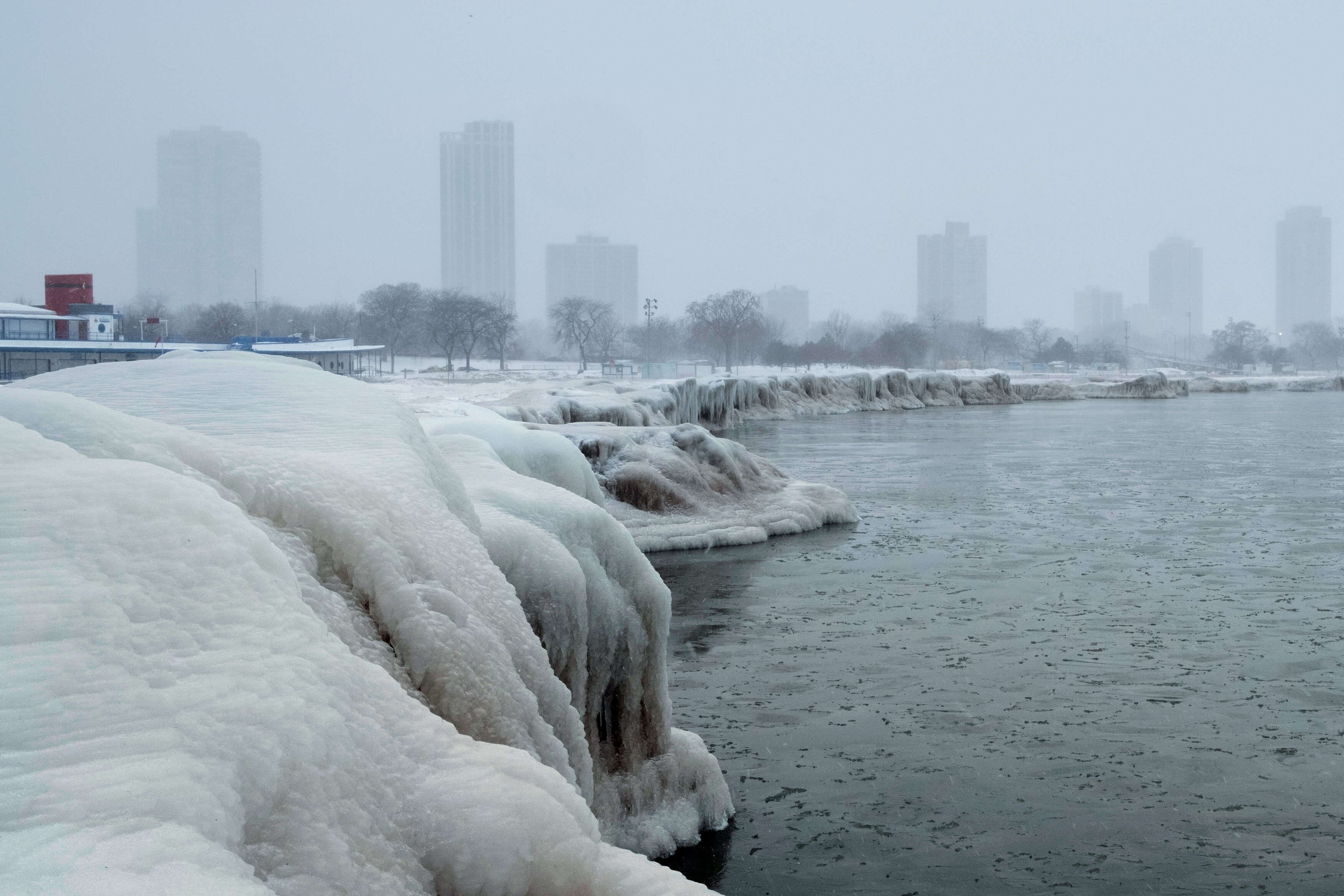 Photo Credit: CNS/Pinar Istek, Reuters - The banks of Lake Michigan are seen frozen with the Chicago skyline in the background Jan. 29 as bitter cold sweeps across much of the central and eastern United States. Hundreds of schools and several large universities closed their campuses Jan. 29 as temperatures plummeted across the Midwest, with forecasters warning that the frigid weather would get worse and could be life-threatening.

The deep freeze that plunged much of the Upper Midwest into historic and dangerously low temperatures was a matter of life and death for many of the area’s homeless at risk of frostbite or hypothermia.

In Chicago, temperatures dipped to nearly a record low Jan. 31 at minus 21, with a wind chill of minus 41, just a few degrees warmer than a 1985 cold snap.

“In many ways it’s a humanitarian crisis here with the severity of weather,” said Msgr. Michael Boland, CEO of Catholic Charities of the Chicago Archdiocese.

He said the agency has made sure all its locations are open to the homeless. It also opened warming centers and its mobile outreach in the city has made sure that people were brought to a shelter or received needed emergency supplies. The outreach also has delivered coats, gloves and hats to those who need them.

The agency is doing what it does every day, but it is getting more calls now with the severe temperature drop. “It’s a really challenging time for a lot of people. … It’s life or death for people on the streets,” Msgr. Boland told Catholic News Service Jan. 31.

He said the agency’s outreach vans brings people to shelters or warming centers, but not everyone wants to leave, thinking they can fight the elements so sometimes they need some convincing.

Amid the frigid temperature drop, he said Catholic Charities had not experienced a decline in volunteers.

“We’re all trying to do what we do and get out and help,” he added.

Similarly, Chicago’s Franciscan Outreach was also doing more of what they usually do.

Ed Jacob, executive director, said the three shelters the outreach usually runs at night have been open 24 hours during the extreme cold so people have a warm place to stay during the day. The shelters also are providing hot meals at lunch instead of the usual bag lunches they distribute in the mornings.

“People are asking what they can do,” he told CNS Jan. 30, noting that the previous night a man donated 50 pizzas.

“It’s all hands on deck,” he added, saying staff members are pitching in and staying overnight to help. The outreach had a good supply of coats and hats but needed more thermal underwear donations.

“It’s brutal, but we will plow through it,” he added.

In St. Cloud, Minnesota, the emergency services programs staffed by Catholic Charities of the Diocese of St. Cloud have been seeing more people during the cold snap, especially those who are having trouble finding places to stay warm or affording heat or gas for their cars, said Ruth Hunstiger, director of community services for Catholic Charities.

“We are seeing people who need to be warm and who are in desperate need,” she said. “Many times, people can get by, but when it gets to be this cold, they can’t.”

An outreach worker with Catholic Charities also is on the streets looking for people who need a warm shelter, Hunstiger said. She noted that since several businesses, restaurants and government offices have closed due to the cold, it is harder for many people to find a place to get warm.

Catholic Charities locations in St. Cloud are full, so they are directing people to other places with room.

Seniors who count on the Meals on Wheels senior food program were given extra meals to keep in the freezer and heat up on the coldest days, Hunstiger said. The program relies heavily on volunteers, but program officials didn’t want volunteers to be out in the extreme cold.

Hunstiger said the agency’s staff and volunteers have been amazing during this deep freeze.

“That’s one thing we do in Minnesota, when it’s tough outside, teams rally and we have people who will do the impossible to make sure that people in need get the services they need,” she said.

In the Diocese of Madison, Wisconsin, a resource center for the homeless operated by Catholic Charities-Madison has been seeing 50 to 100 more people a day than average during the cold spell.

The center, called the Beacon, coordinates services with overnight shelters to keep people out of the cold and manages shuttles between shelters and day centers. It also provides food and cold-weather necessities: hats, gloves and socks.

Although many rely on service agencies, particularly Catholic Charities, sometimes extreme circumstances motivate people to do more to help.

That was the case with Craig Fenton of Divine Mercy Parish in Burlington, Iowa, who coordinated a temporary emergency shelter in a church cafeteria.

When he heard weather forecasts calling for wind chills as low as minus 45 degrees Jan. 29-31, he called his pastor, Father Marty Goetz, about opening the cafeteria for those in need at St. John Church, a mission church of Divine Mercy Parish.

“Without hesitation, he said, ‘Yes, let’s do it,'” Fenton said. He then checked with local fire and police departments, whose representatives agreed to keep a watch on areas where homeless people usually sleep to let them know about the temporary emergency shelter at the parish.

At the parish, individuals and families could get a hot meal and take as many donated items as they needed. It served more than 75 individuals, with five to 10 spending the night on Jan. 29 and Jan. 30.

Leon, one of those who stayed overnight, said he is not homeless but he was unable to return to his home during the cold snap and was worried about where he would stay before a relative told him about the opportunity at St. John.

After he arrived, he received a hot meal, a cot and a few blankets. “I’m thankful, I feel relieved I didn’t have to be out,” he said.

Fenton, meanwhile, put out a request for his organization, Transitions, DMC, which provides blankets, coats, food and other items to people in need.

The response was overwhelming, he said. “People came in with carloads of stuff.”