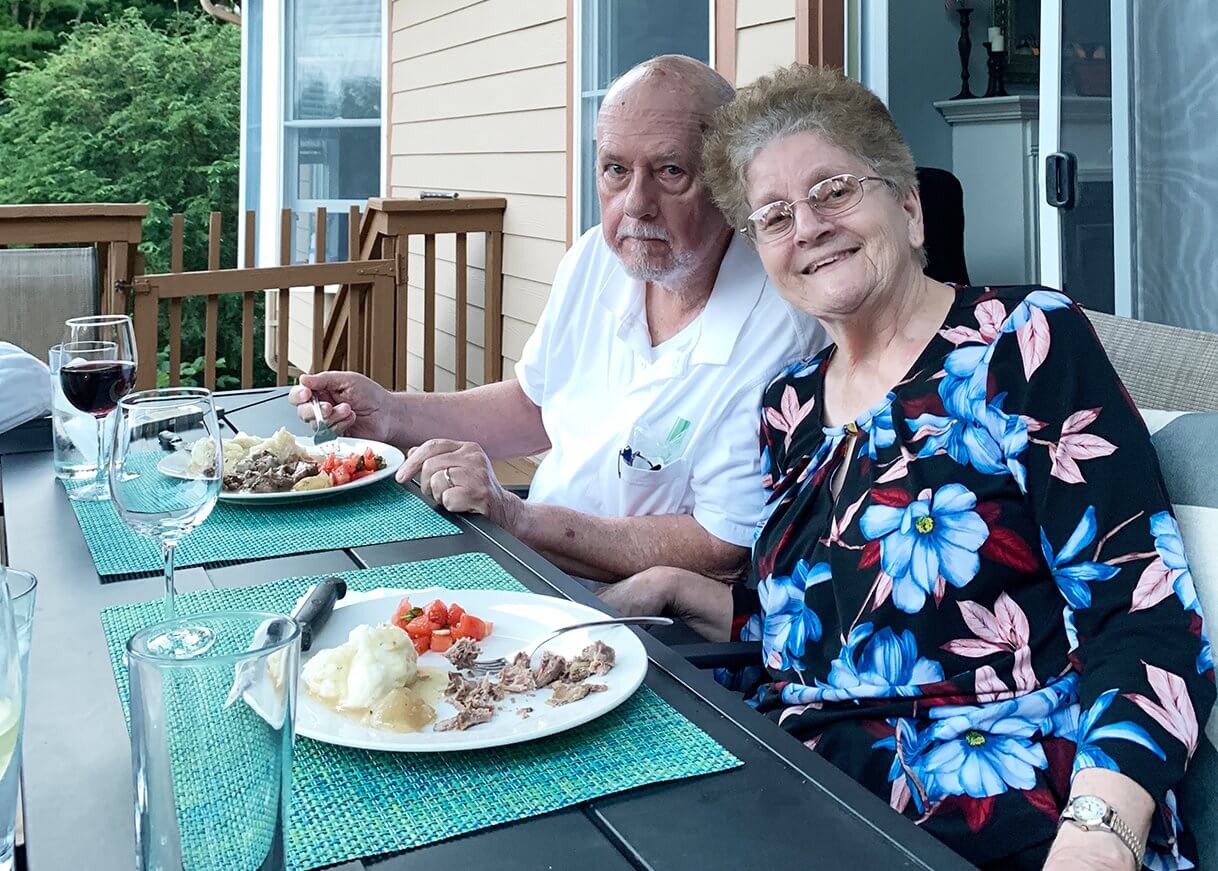 Photo Credit: CNS/courtesy Linda Reeves via The Florida Catholic - Deacon Michael Plummer of Our Lady of Lourdes Parish in Miami enjoys a evening with his wife, Mary, last summer, while staying in the North Carolina mountains during the Covid-19 lockdown. It was during that time in the mountains when Deacon Plummer was inspired to begin a rosary campaign encouraging everyone to pray for respect for life.

Deacon Michael Plummer headed for the mountaintops close to heaven when the global pandemic hit, and there, amid God’s beauty and the breathtaking views in North Carolina, he was inspired to carry out a special mission to save lives.

“I began a commitment to pray a thousand rosaries for life using specific mysteries,” said the energetic 80-year old, who has vowed to constantly pray the rosary in honor of Mary and to call on her for help in the protection of life.

“I think this is a very interesting and important mission. It has potential,” said Deacon Plummer.

He began praying Jan. 1 and has continued to pray every day since. He is back in Miami now, where he serves at Our Lady of Lourdes Parish. After being nudged by Msgr. Kenneth Schwanger, his pastor, he is beefing up his prayer project.

“Msgr. Schwanger invited me to share this as a call to others to commit to praying the rosary,” said Deacon Plummer. “A thousand rosaries for life may not seem like very many in the grand scheme of things, but think about the power of 100 people saying 1,000 rosaries. Of course, I would rather have 1 million people praying,” he confessed.

Our Lady of Lourdes has announced Deacon Plummer’s “1,000 Rosaries for Life” campaign in the parish bulletin, encouraging families and individuals to get involved and to promote the prayerful mission to others, especially those at home still in lockdown because of COVID-19.

Parishioner Ana Perez-Nodarse, a respect life representative at Our Lady of Lourdes, said she supports Deacon Plummer’s idea of encouraging rosary prayer, especially during Lent and the worldwide 40 Days for Life campaign of prayerful witness in front of local abortion clinics, which began Ash Wednesday.

“It is a wonderful idea,” she said. “I think we can work together. We can put all our rosaries together in a beautiful bouquet for Our Lady.”

As part of Deacon Plummer’s vision that manifested while he was “hiding out from Covid” in North Carolina’s Appalachian Mountains, participants are asked to meditate on certain mysteries of the rosary or a passage in the life of Christ or Mary.

“The richness of the 20 mysteries of the rosary became a bit clearer to me,” said Deacon Plummer. He explained that he carefully and deliberately selected five mediations with life at the center.

The three joyful mysteries he selected are the Annunciation, Visitation and Nativity. These meditations remind the faithful of the Son of God’s joyful coming into the world.

“That is the best pro-life story ever told,” Deacon Plummer told The Florida Catholic, newspaper of the Archdiocese of Miami. “God brought his only Son into the world through the womb. There were other ways he could have come.”

The other meditations he selected include the celebration of marriage and family at the wedding feast at Cana, a luminous mystery, and the Resurrection, a glorious mystery.

In his nearly 40 years of service as a deacon in the Archdiocese of Miami, Deacon Plummer has taken on many roles. He has been a pro-life advocate for as long as he can remember, quietly praying for respect of life during events and gatherings and during his own personal prayer.

He believes that now, perhaps more than ever in today’s world, Catholics are called to step up to put their faith in action and to pray for life, marriage, and family, all of which are threatened by society.

“Human life is sacred from the moment of conception until natural death. It is my argument that you can’t separate respect for life from the discipleship of faith,” he said.

Deacon Plummer was ordained a deacon in 1984. He also is a husband and father of five children and eight grandchildren. He lost his son, who would have been 47 this year, in a helicopter accident in 2005, a life-shattering event for him and his wife, Mary. The couple married in 1967.

Born in Pennsylvania, he came to Florida in 1960 when he joined the U.S. Air Force. After the service, he studied at the University of Miami, earning both bachelor’s and master’s degrees in business. He had a successful career in a Florida utilities business.

A simple but beautiful emblem has been designed for the prayer campaign, featuring rosary beads in the shape of a heart and a simple prayer to Mary under the title Our Lady of Hope.

Our Lady of Hope appeared at Pontmain, France, in 1871 wearing blue and white and in her eighth month of pregnancy. The emblem will be used to promote the “1,000 Rosaries for Life” campaign.

“I am trying to plant seeds,” said Deacon Plummer. “We are trying to do it in the midst of the Covid pandemic.”