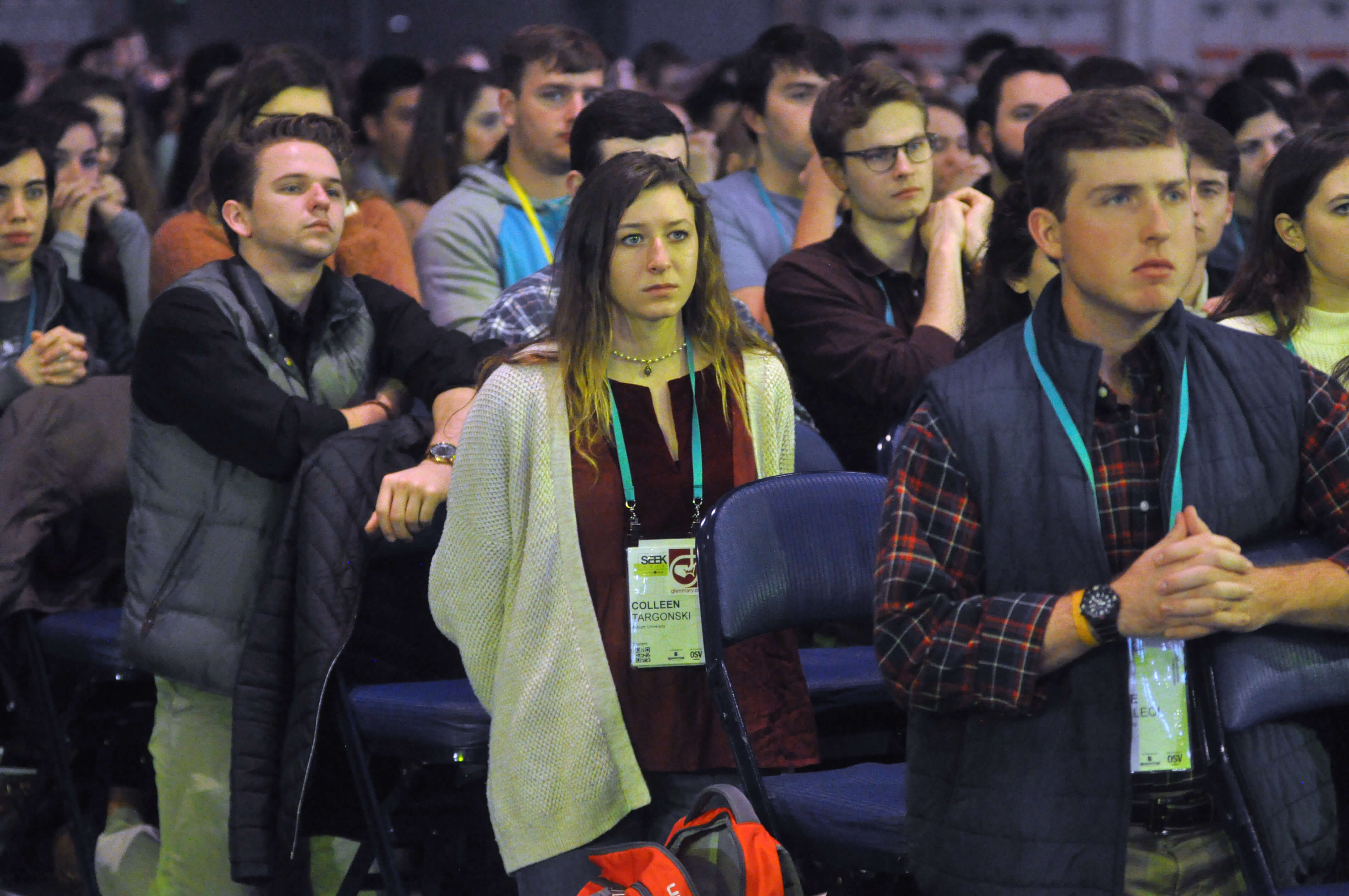 Photo Credit: CNS/Sean Gallagher, The Criterion - Young people kneel in prayer Jan. 6 during a Mass at the SEEK conference that drew 17,000 mainly college students from across the country to the Indiana Convention Center in Indianapolis. The conference is a biennial event sponsored by the Fellowship of Catholic University Students.

Denver Archbishop Samuel J. Aquila described the 17,000 mostly college students attending SEEK2019 in Indianapolis as “a great sign of hope for the Church, that the Church is alive and well among young people.”

He celebrated Mass on Jan. 6 for the participants in the biennial conference sponsored by the Denver-based Fellowship of Catholic University Students (FOCUS). The group, founded in 1998, seeks to nurture the Catholic faith in college students. It currently has nearly 700 missionaries serving on 153 college campuses in 42 states and five international locations.

In his homily, Archbishop Aquila said he was briefly “playing hooky” from the retreat taking place for bishops in the U.S. at Mundelein Seminary at the University of St. Mary of the Lake near Chicago to celebrate the Mass in the Indiana Convention Center in Indianapolis.

This year’s SEEK gathering, Jan. 3-7, is the sixth such conference that Archbishop Aquila has attended.

“Certainly, you can see the deep faith in the young people,” he said in an interview after the liturgy. “What their encounter with Christ has brought about is palpable. When you give young people the truth of Christ and Christ as the light and the one who gives meaning to life, it changes everything.”

In his homily, the archbishop spoke about the reading from Isaiah where the prophet spoke of darkness covering the earth. He said this darkness today is consumerism, incivility and the “sin by certain members of the clergy.”

“All of that can, at times, discourage us,” he said. “But in the midst of that is the light of Jesus Christ. And it is that light that we must focus on.”

He spoke about how Capuchin Father Raniero Cantalamessa, the preacher of the papal household who is leading the bishops’ retreat, told the bishops that society has lost the “sense of eternity” and that “when we look at the darkness of the world, when we look at the darkness within the church, we have lost the sense of eternity, that we really do not believe in Christ as the light, in Christ as the one is come to give us eternal life.”

Turning to Christ and entering into a relationship with him, Archbishop Aquila said, can draw people out of this darkness: “Jesus can heal any wound. He can restore any disorder. He can bring light into darkness.”

He implored the conference participants to take the light of Christ they have received and share it with others.

Colleen Tragonski, a junior from Auburn University in Auburn, Alabama, said the impact of the conference is “so hard to put into words.”

“The Holy Spirit is so present here, everywhere in the atmosphere,” she said. “That’s the best way that I can put it.”

She said the conference gave her “an incredible hope,” despite the challenges facing the church now.

“It’s amazing to see thousands and thousands of college students celebrating the Mass, all making this journey to Indianapolis, but also to heaven,” she said.

She also said she looked forward to embracing the mission that Archbishop Aquila presented to conference attendees.

“I hope that I can take everything that I’ve learned and use it in every single moment of my life to be the light of Christ for other people,” she said. “It’s so easy to be on a high when you’re here. It’s the biggest challenge to … bring that to other people.”