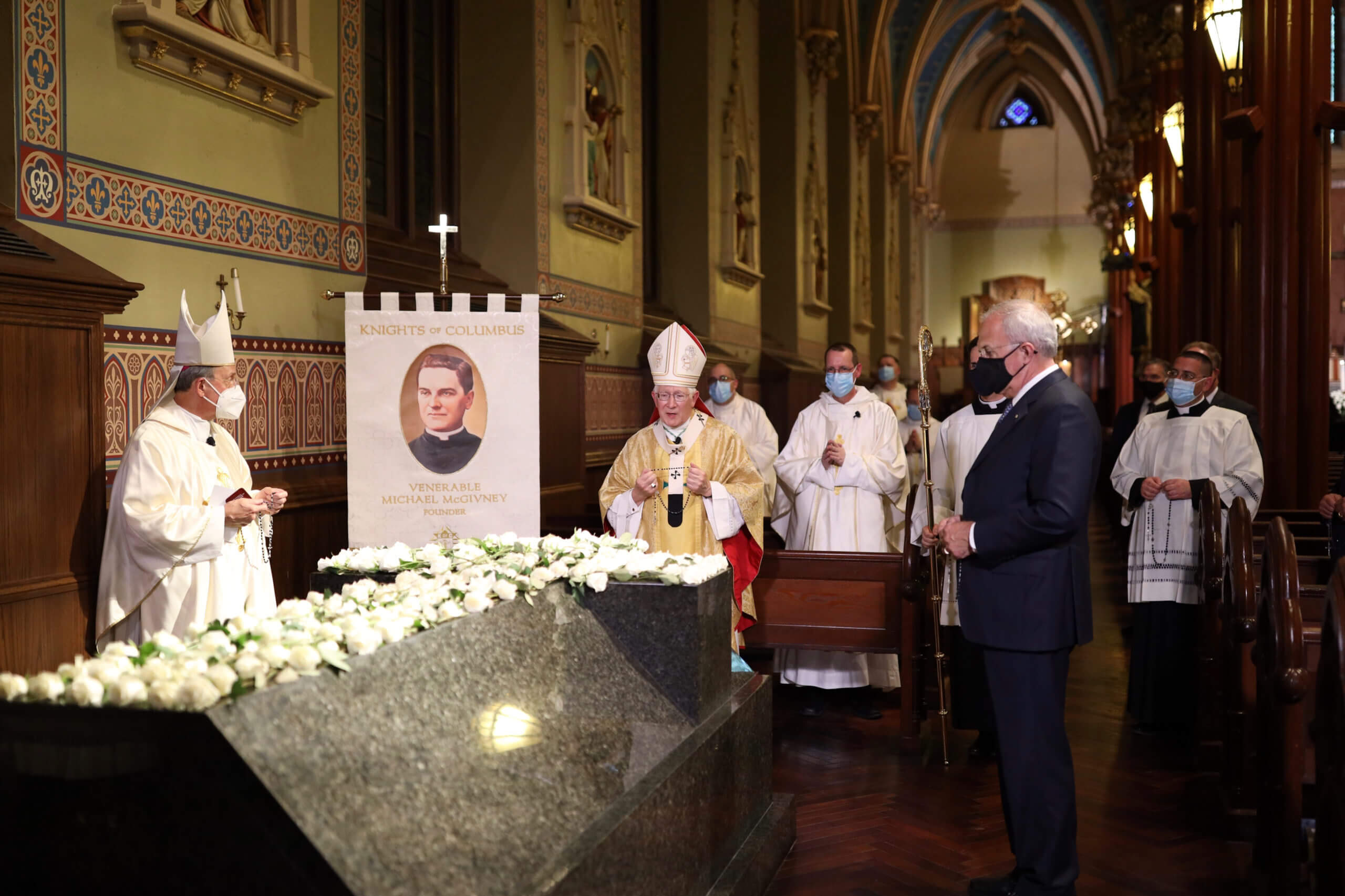 The new Blessed Michael McGivney Pilgrimage Center planned by the Knights of Columbus will focus on “the spirituality and charitable vision of our founder and his legacy,” said Supreme Knight Carl Anderson in announcing the new center Aug. 4.

The center will be located at the current Knights of Columbus Museum in New Haven.

Anderson’s announcement came on the first day of the fraternal organization’s 138th annual Supreme Convention, which this year had to be a virtual convention due to COVID-19 restrictions on most gatherings.

The convention, which had as its theme “Knights of Fraternity,” officially opened with an evening Mass celebrated by Hartford Archbishop Leonard. P. Blair at historic St. Mary’s Church in New Haven, where Father McGivney founded the Knights of Columbus and where his remains are interred.

The archbishop had news of his own to share: Father McGivney’s beatification will take place at the Cathedral of St. Joseph in Hartford Oct. 31. The date had been released by the Vatican Congregation for Saints’ Causes in a small notice on its website July 20, but Archbishop Blair’s announcement confirmed it will take place in the cathedral.

Also during the Mass, a message to the Knights sent by Pope Francis through the Vatican’s Secretariat of State, was read.

“In these days, your order has provided charitable support on the local, national and international level to individuals and communities suffering because of the pandemic or otherwise often forgotten or marginalized,” said the message conveyed by Archbishop Pietro Parolin, Vatican secretary of state.

“His Holiness is grateful for these and for the many other countless ways in which the Knights of Columbus continue to bear prophetic witness to God’s dream for a more fraternal, just and equitable world in which all are recognized as neighbors and no one is left behind,” he added.

The Knights expect COVID-19 restrictions to be in place on the date of Father McGivney’s beatification, and are making preparations to broadcast the Mass to a worldwide audience so the public is able to join the celebration.

On May 27, the Vatican announced that Pope Francis, who met with the board of directors of the Knights of Columbus in February, had signed the decree recognizing a miracle through the intercession of Father McGivney, clearing the way for his beatification.

Once he is beatified, he will be called “Blessed.” In general, confirmation of a second miracle occurring through the intercession of the sainthood candidate is needed for canonization.

“For members of the Knights of Columbus and many others, the news of the beatification is a time of great joy and celebration,” Anderson said. “Father McGivney ministered to those on the margins of society in the 19th century, and his example has inspired millions of Knights to follow his example in their own parishes and communities.”

Father McGivney (1852-1890), the son of Irish immigrants, was born in Waterbury, Connecticut, and was ordained a priest in 1877 for what is now the Archdiocese of Hartford.

He founded the Knights in 1882 at St. Mary’s Parish, where he was an assistant pastor. He originally started the group as a service organization to help widows and orphans.

Father McGivney, who will be the first American parish priest to be beatified and has long been a hero of working-class Catholics, can be viewed as a martyr of a pandemic. When he died of pneumonia complications at age 38 in 1890, it was during an outbreak of influenza known as the Russian flu in Thomaston, Connecticut. Some recent evidence, according to the Knights, indicates the outbreak may have been the result of a coronavirus.

The miracle needed for his beatification and now recognized by the Vatican occurred in 2015 involved a U.S. baby, still in utero, who had a life-threatening condition that, under most circumstances, could have led to an abortion.

That baby, Mikey Schachle, is now 5. His parents, Dan and Michelle Schachle, of Dickson, Tennessee, prayed to Father McGivney to intercede with God to save their unborn son, who was given no hope of surviving a life-threatening case of fetal hydrops.

In announcing creation of the new McGivney center, Anderson said that while the Knights of Columbus Museum “will continue to recount the Knights’ history,” it will “broaden its mission” with the center focused on the soon-to-be-beatified priest and “will enhance the formative experience of a pilgrimage to Father McGivney’s tomb at St. Mary’s.”