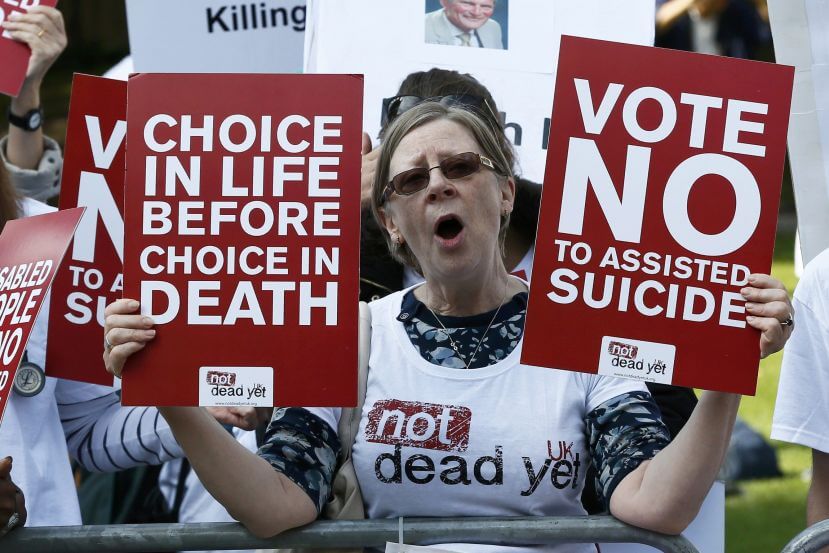 Photo Credit: (CNS photo/Stefan Wermuth, Reuters) - A demonstrator against "assisted dying" joins a protest outside the Houses of Parliament in London.

Life Issues Forum: In The Direction of Life

Recently we observed the 45th anniversary of the Supreme Court’s Roe v. Wade ruling, which legalized abortion throughout the United States. As in past years, hundreds of thousands gathered in Washington to pray, to march, to lobby and to work for the end to abortion. We mourn the lives that have been lost in 45 years of legalized abortion. At the same time, we look to the future with hope for those that might be saved.

Recent developments offer great promise in protecting the most vulnerable among us.

On Jan. 18, the U.S. Department of Health and Human Services announced the formation of a new Conscience and Religious Freedom Division within its Office of Civil Rights. The new division more vigorously will enforce existing laws that protect the conscience rights and religious freedom of health care providers like Cathy DeCarlo, who was forced to participate in an abortion.

They continued, “For more than forty years—dating back to the Church amendment of 1973—Congress has enacted federal laws protecting rights of conscience in health care. We are grateful that HHS is taking seriously its charge to protect these fundamental civil rights through formation of a new division dedicated to protecting conscience rights and religious freedom.”

On Jan. 19, President Donald Trump, joined by Vice President Mike Pence, addressed those participating in the March for Life via a live satellite rally at the White House Rose Garden, pledging always to defend the right to life.

On the same day, the administration also rescinded the Obama Administration’s 2016 guidance from the Centers for Medicare and Medicaid Services that prevented states from withholding Medicaid funding from family planning providers that perform abortions. This action returns to the states the ability to direct these federal funds to institutions that do not provide abortion, allowing for pro-life advancements at the state level.

Those not complying with these guidelines would face penalties. Cardinal Dolan praised this action and encouraged the Senate to follow suit.

These developments may seem small in comparison to 45 years of legalized abortion; however, they demonstrate that we are continuing to make significant progress. These advances increase conscience protections, draw attention to the humanity of precious life in the womb, limit funding for abortion and advance our ultimate objective of making abortion unthinkable.

Now is not the time to despair but to redouble and renew our commitment to the Gospel of Life. Our sustained and collaborative efforts can continue to advance pro-life legislation.

As we remember and mourn all whose lives have been lost or wounded through the scourge of Roe, we look to tomorrow with hope and joy because we know that Christ has already conquered death. May He make His truth new in our hearts, that we may continue to move our country and our culture in the direction of cherishing all human life.
________________________________________
Chelsy Gomez is program associate for the Secretariat of Pro-Life Activities, U.S. Conference of Catholic Bishops. To sign up for pro-life action alerts, visit humanlifeaction.org/signup.

Share This Post
Respect Life, US Department of Health and Human Services, Conscience and Religious Freedom Division, March for Life, abortion, Roe v Wade
See More
Last Article
The Catechism of the Catholic Church at 25
Next Article
Recognizing the Feast of Ashes, Boredom and Dull Moments
Back to Vermont Catholic Magazine