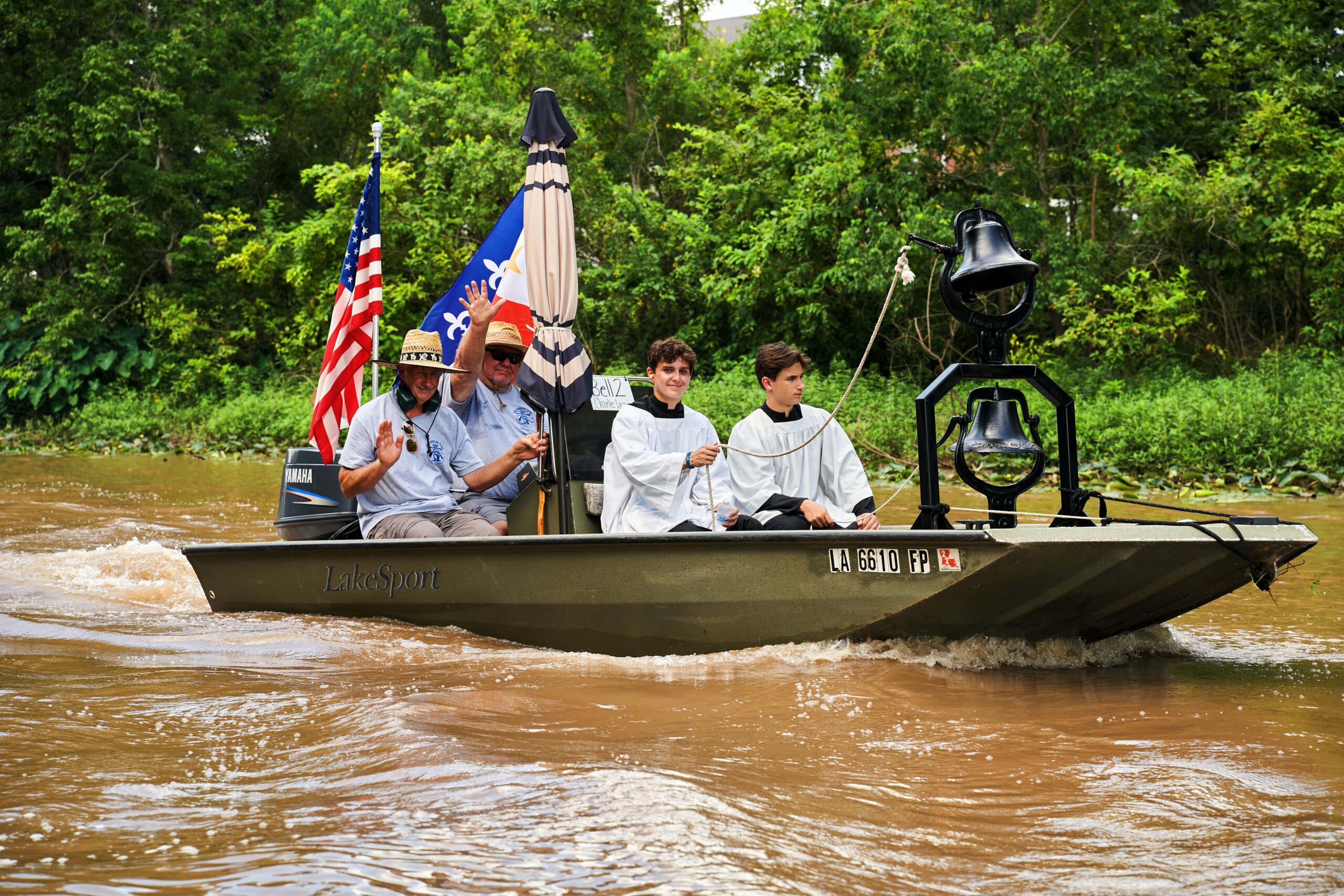 Photo Credit: CNS/courtesy Father Michael Champagne - A boat participates in the annual Fête-Dieu du Têche in the Diocese of Lafayette, La., Aug. 15, 2021. The 40-mile Eucharistic procession by boat and on foot along the Bayou Têche takes place on the feast of the Assumption of Mary. The 2022 procession comes about two months after the launch of the U.S. Catholic Church's 3-year National Eucharistic Revival.

The annual Fête-Dieu du Têche in the Diocese of Lafayette takes place on the feast of the Assumption, Aug. 15, and this year’s 40-mile Eucharistic procession by boat down the Bayou Têche coincides with the U.S. Catholic Church’s 3-year National Eucharistic Revival now underway.

“In an effort to cultivate a deeper devotion to Jesus’ presence in the Eucharist, boaters will be able to choose a patron from a list of 50 eucharistic witnesses — saints and blesseds “who exemplified a life totally dedicated to Jesus in the Holy Eucharist,” according to a news release about this year’s event.

Saints known for their love of the Eucharist will be highlighted, including St. Thomas Aquinas, St. Jean Vianney, St. Katharine Drexel, St. Teresa of Kolkata, as well as Blessed Carlo Acutis.

Boats will feature cutouts, flags and banners bearing the name of their chosen saint and present quotations from them about the importance of the holy Eucharist.

“The intention for the all-day spiritual and cultural celebration will be for a ‘Renaissance Eucharistique’ in Acadiana and beyond,” the release said.

Acadiana refers to the French Louisiana region — composed of 22 parishes — that is home to the Cajun people. Cajuns are descendants of the Acadians, a people exiled from present-day Nova Scotia by the British during the French and Indian War. They settled along the bayous and prairies of southwest Louisiana.

Mary is the patroness of the Acadian people and of Acadiana. This year her feast day marks the 257th anniversary of when these French-Canadian immigrants first came to this part of Louisiana, bringing their Catholic faith with them.

“After the French and Indian War, around 1763, the British demanded that those living in present-day Nova Scotia renounce their Catholic faith and swear allegiance to the British King,” said Lafayette Bishop Douglas Deshotel.

“Those who did not were expelled from the country. They lost their lands, their homes and some their lives,” he said. “It was the first example of ethnic cleansing in the New World. Many came to settle in south Louisiana where it was French and Catholic.”

“They brought their culture, their food and their Catholic faith — a special devotion to the holy Eucharist and Mary the Mother of God,” he added.

Fête-Dieu du Têche will begin with an 8 a.m. Mass celebrated in French by Bishop Deshotel at St. Leo the Great Catholic Church in Leonville.

Following the Mass, there will be a procession with the Blessed Sacrament and a statue of Mary and St. Joseph to the nearby boat landing. Families are encouraged to join the procession as a family and follow it to the boat landing for Benediction.

The Blessed Sacrament will be fixed on an altar on the lead boat under a canopy. Another boat will carry the statue of the Assumption of the Blessed Virgin Mary.

At 9:30 a.m., boats will depart in procession down the Bayou Têche toward St. Martinville, retracing the voyage made by the Acadians 257 years ago. Bayou residents are encouraged to gather as a family and greet the Blessed Sacrament as it passes near their home.

The boats will stop to allow their passengers to disembark for the rosary and Benediction at churches in the towns along the way: St. Francis Regis Church, Arnaudville; St. Joseph Church, Cecilia; St. Bernard Church, Breaux Bridge; and St. Joseph Church, Parks.

The final stop will be St. Martinville. Participants will disembark and walk in procession to Notre Dame de Perpetual Secours for Benediction, then to St. Martin de Tours for benediction, and finally to Mater Dolorosa Chapel for solemn vespers and Benediction.

Fifteen priests will be available to hear confessions in mobile units at each of the stops along the way.

In addition to those who join in the Eucharistic procession by boat, others with travel by car and gather along the banks of the bayou at the various planned stops.

“The Most Blessed Sacrament traveling by boat on the bayou, which was a major channel of transportation for our ancestors, calls to mind the vital role that the Eucharist has played in the faith of Acadiana,” said Bishop Glen Provost of Lake Charles, a neighboring Diocese of the Lafayette Diocese.

“Fête-Dieu du Têche is an expression of our faith in God, our respect for family and devotion to our community that allow us to build a better tomorrow,” he added.

Father Michael Champagne, a priest of the Community of Jesus Crucified in St. Martinville, who is the organizer of the daylong event, said the all-day flotilla requires some 120 volunteers to assure that its many “moving parts” synchronize.

One volunteer, Denise Denais, who is responsible each year for boat registration, noted that she “has experienced a deeper faith in witnessing the many prayerful faithful lining the banks of the bayou simply to worship Our Lord in the Holy Eucharist.”