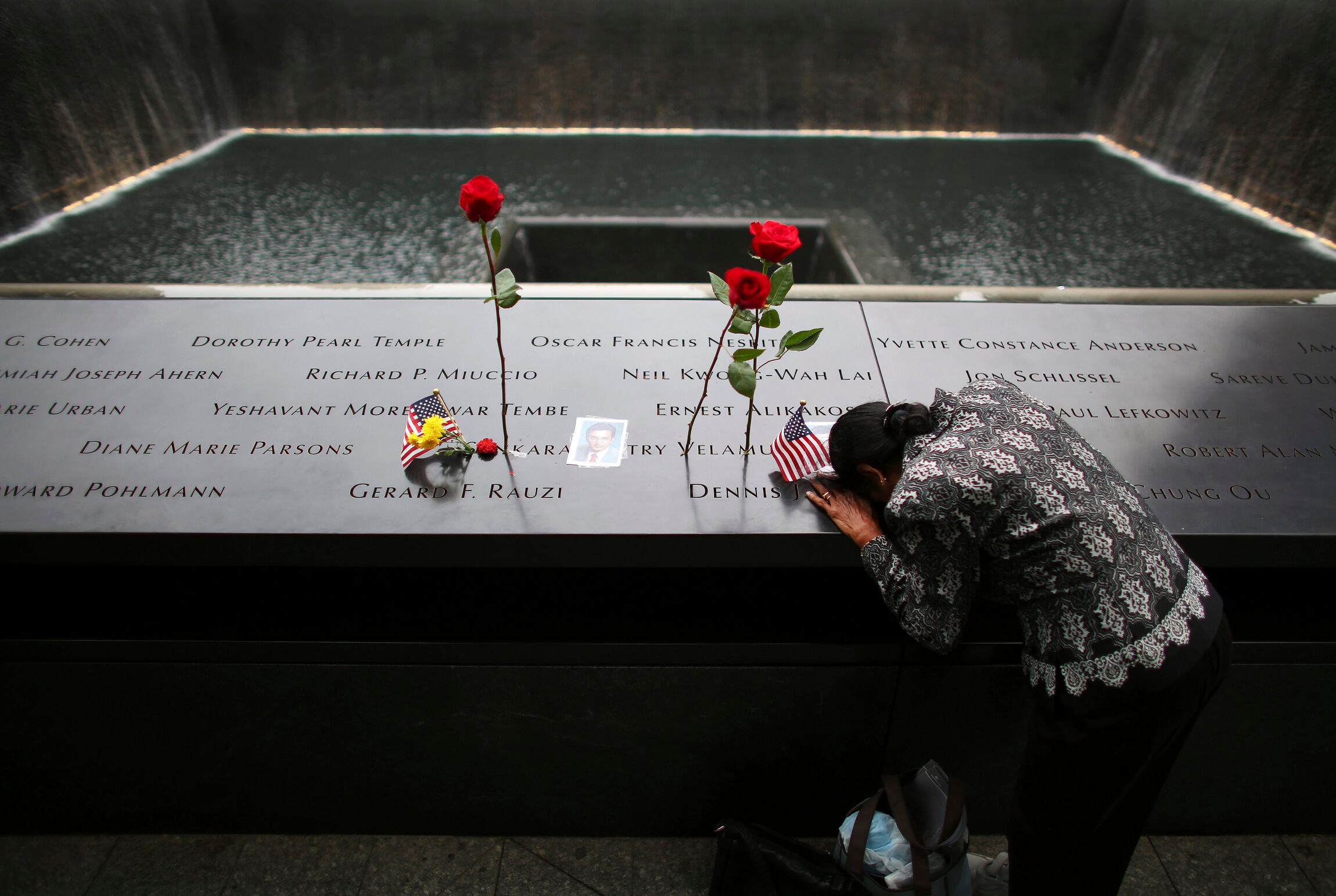 Photo Credit: CNS/Chang Lee, Reuters - A woman grieves at the inscription of her late husband's name at the national 9/11 Memorial and Museum in New York City Sept. 11, 2014. Msgr. John Delendick, a longtime New York Fire Department chaplain, still recalls the 9/11 attacks vividly. That first year after the attacks, he said, he doesn't remember how many funerals and memorial Masses he celebrated.

At the time of the terrorist attacks on the World Trade Center, Msgr. Delendick had just finished celebrating Mass at St. Michael’s Church in Brooklyn where he was pastor. He jumped in his car and drove as close as he could get and then walked to the scene.

When he got to the twin towers, he ran into other fire department colleagues, including first deputy commissioner William Feehan, who was later killed in the collapse. He also gave absolution to a police officer who ran to him amid a dark cloud of debris and smoke, asking the priest to hear his confession.

He also recalls learning that his colleague and fellow fire chaplain, Franciscan Father Mychal Judge, was among the first known victims of the South Tower’s collapse.

“That day, I don’t even know the order of what all happened … Someone just handed me (Father Judge’s) helmet and told me he was killed,” he told The Tablet, newspaper of the Diocese of Brooklyn.

The hardest thing of that day, he said, was people asking him if he had seen their friends, fathers, brothers and sons — firefighters and first responders at the scene — and not knowing how to respond. It wasn’t until after returning from ground zero that Father Delendick and many families would realize that their friends and loved ones had died.

As fire department chaplain, in between celebrating memorial Masses for the fallen, Msgr. Delendick would visit “the pile” at ground zero in the months that followed, accompanying families in their search for loved ones.

That first year after 9/11, he doesn’t remember how many funerals and memorial Masses he said.

“It’s just, you get so many of these funerals, and it just gets to you after a while. … I love the job, but I also hate it,” he said. Every year since the attacks, the New York Fire Department remembers and honors the heroes, especially those who have died years later from illnesses attributed to 9/11.

This Sept. 6 the department added the names of 22 firefighters and recovery workers to the New York Fire Department World Trade Center Memorial Wall inside its Brooklyn headquarters.

One victim of a 9/11 illness honored on the memorial wall was Lt. Timothy O’Neill, a Catholic who died in April after battling pancreatic cancer for two years. O’Neill worked for several months at ground zero during the cleanup efforts.

“My husband risked his life, and he paid the ultimate sacrifice 18 years later,” said his widow, Paula O’Neill. “It was a complete shock because he never had any symptoms, but then one day he went for a CT scan. … He always thought he would get sick after breathing in everything, sometimes without a mask. He just didn’t really talk about it, and we never expected the severity of the cancer.”

With the help of the federally funded September 11th Victims Compensation Fund, O’Neill was able to be receive treatment for his cancer from his Florida home.

“I still have firemen to this day calling, crying to me,” she said.

At the Brooklyn ceremony, Father Joseph Hoffman, pastor of St. Barbara in Brooklyn, who also is a New York Fire Department chaplain, read a Bible passage which said: “The Lord God will wipe away the tears from all faces.”

The priest said that working with the fire department is “like serving another parish” and he is honored to work with these men and women.