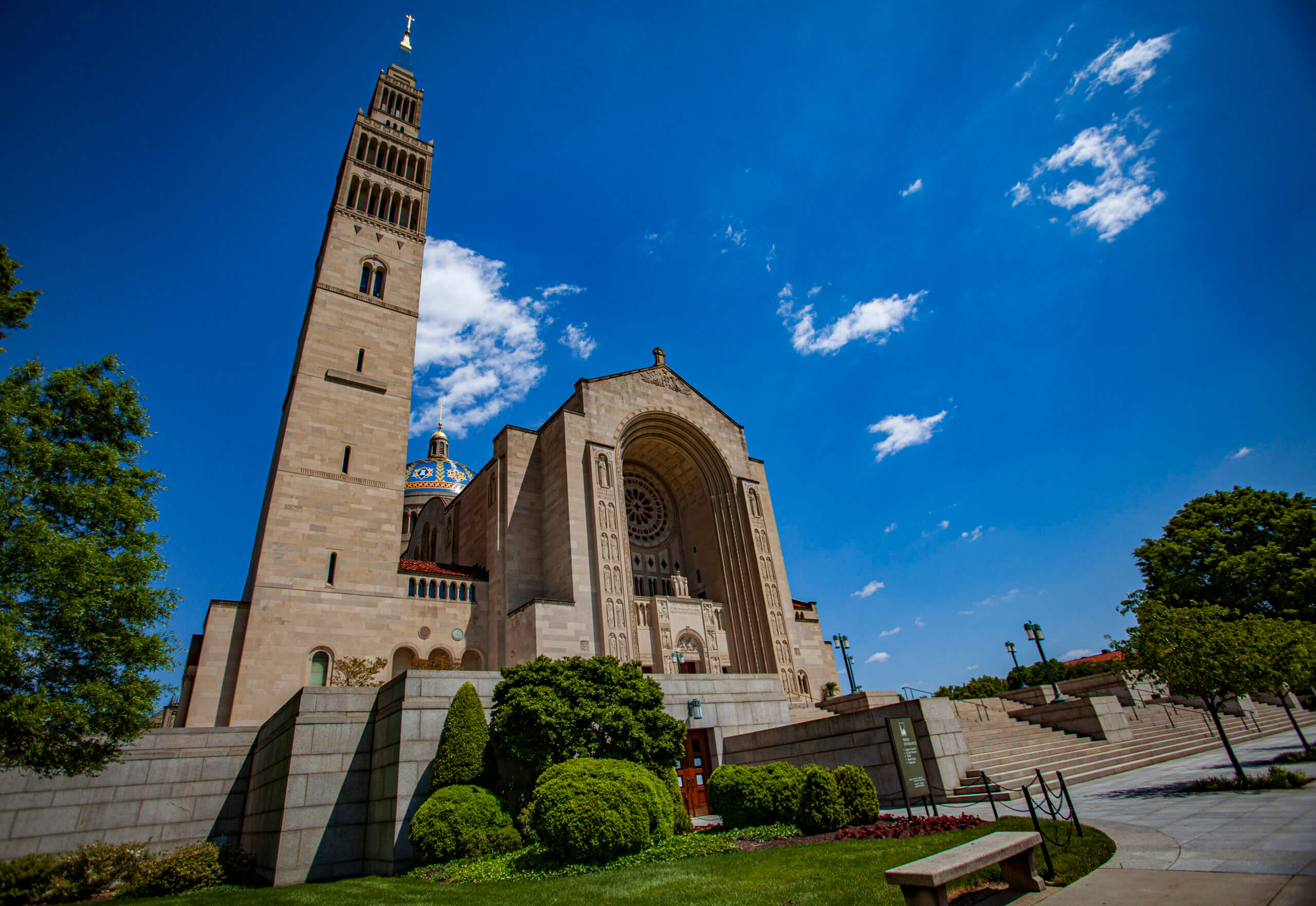 Photo Credit: CNS/Chaz Muth - The Basilica of the National Shrine of the Immaculate Conception in Washington, D.C., is seen in a relatively quiet state May 13; it is temporarily closed amid the Covid-19 pandemic. The land where the shrine now sits was blessed during a special Mass on the site May 16, 1920. The cornerstone was laid Sept. 23, 1920, but the Great Depression and World War II delayed completion of the church until 1959.

On May 16, the Basilica of the National Shrine of the Immaculate Conception in Washington — the largest Catholic church in North America and one of the 10 largest churches in the world — marks the 100th anniversary of the blessing of the land on which it was built.

At 9:30 a.m. on May 16, 1920, Archbishop Giovanni Bonzano, apostolic delegate to the United States, celebrated Mass and blessed the site of the future national shrine. More than 6,000 people attended the event, including 1,500 Knights of Columbus and 500 Daughters of Isabella.

“In many ways, this was the first pilgrimage to the national shrine, as Catholic groups from across the country gathered to witness the event,” says a history of the basilica on its website, www.nationalshrine.org.

The altar used at the Mass was used by the first Catholic bishop of the United States, Bishop John Carroll, and dated to 1774.

Bishop Thomas Shahan, who seven years before had presented to Pope Pius X a plan to build a national church in honor of Mary in Washington, delivered the homily during this historic Mass. Father A.L. Gabert, professor of plain chant at The Catholic University of America, directed a choir of 487 voices that included members of the university’s affiliated religious communities of the University and 100 children from St. Vincent’s Orphanage.

The placing of its first stone of the future national shrine — the foundation stone — took place Sept. 23, 1920. This significant event marked the beginning of the construction of the church. The Great Depression and World War II delayed its completion until 1959.

Since that time, the national shrine has always remained a work in progress with the continual additions of stained-glass windows, mosaics, statues, dome work and chapels. More than 70 chapels and oratories — which are similar to chapels but do not have altars — are located throughout the shrine.

It was named a basilica in 1990, and on Dec. 8, 2017, the inner Trinity Dome Mosaic was dedicated, completing the last interior area in the Great Upper Church that had remained unadorned.

A celebration of the centennial of the placement of the foundation stone will begin with Mass Sept. 20. Washington Archbishop Wilton Gregory, chairman of the national shrine’s board of trustees, is scheduled to be the principal celebrant and homilist.

This Mass will inaugurate a yearlong celebration that will include special Masses, concerts, pilgrimages, exhibits, and other events to commemorate this historic milestone of “America’s Catholic Church.”