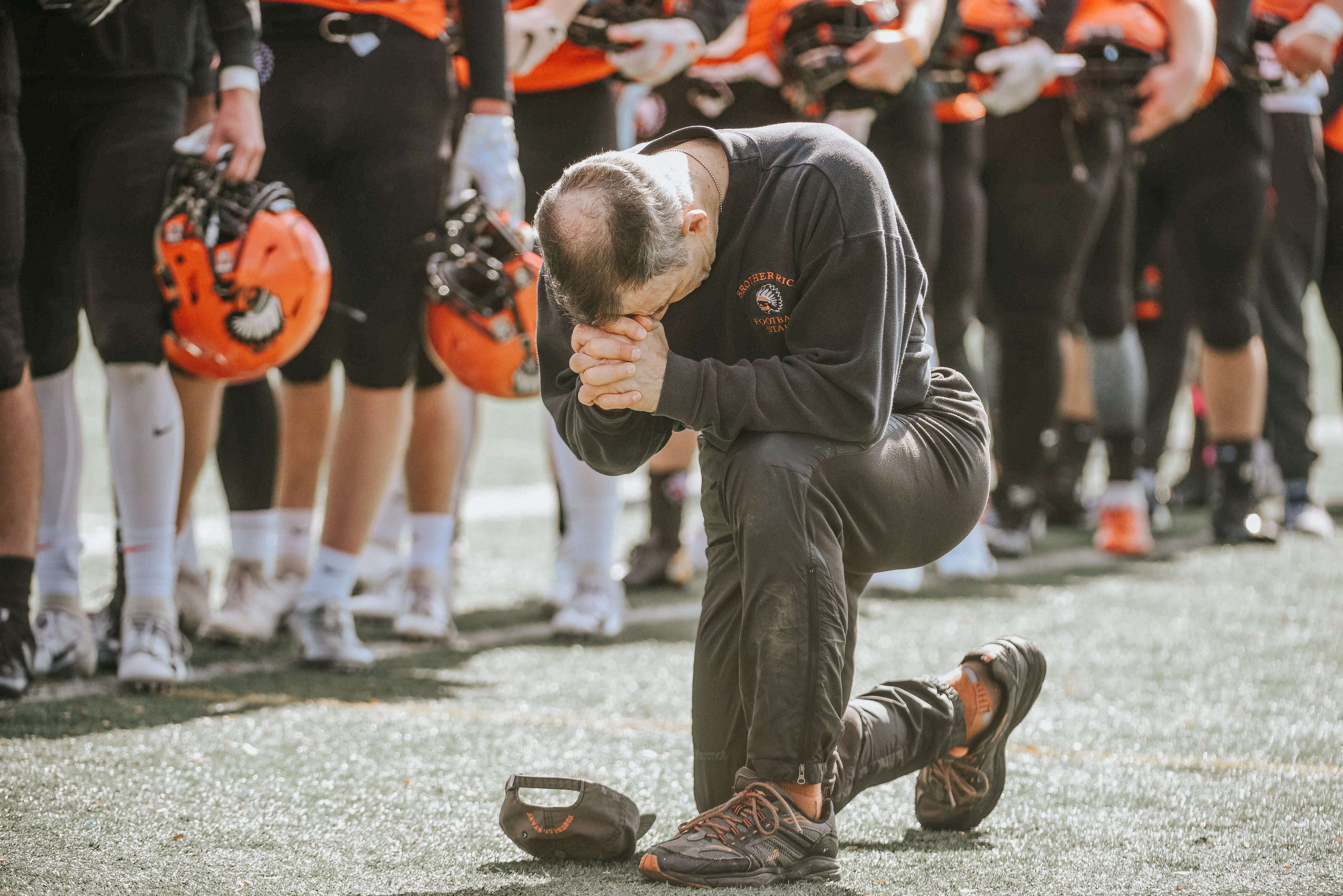 Photo Credit: CNS/Tim Fuller, courtesy Archdiocese of Detroit - A coach kneels in prayer during a high school game at Hurley Field in Berkeley, Michigan. As part of a new pastoral note encouraging Catholics in the Archdiocese of Detroit to keep Sunday as a day of holiness, rest and family togetherness, Archbishop Allen H. Vigneron introduced a new policy requiring Catholic parishes and schools to stop scheduling athletic games and practices on Sundays.

As part of a new pastoral note encouraging Catholics in the Archdiocese of Detroit to keep Sunday as a day of holiness, rest and family togetherness, Archbishop Allen H. Vigneron introduced a new policy requiring Catholic parishes and schools to stop scheduling athletic games and practices on Sundays.

“In shifting away from the hustle of required sporting activities on Sunday, we will reclaim this holy day and create more time for families to choose activities that prioritize time spent with each other and our Lord,” Archbishop Vigneron wrote in “The Day of the Lord,” released May 15 as the fourth in a series of teaching notes supporting the themes of his 2017 pastoral letter, “Unleash the Gospel.”

The policy, which goes into effect Aug. 1, is not meant to lessen the Archdiocese’s commitment to youth athletics, said Father Stephen Pullis, director of the Archdiocese’s Department of Evangelization, Catechesis and Schools.

“At the synod, the question came up about how we can best live our life as a Church together, to bear witness to the world about what we believe,” Father Pullis told Detroit Catholic, online news source for the Archdiocese. “What came through very clearly was that athletics are a wonderful part of the life of our local church, but they’ve also in some ways taken a disproportionate amount of time and attention for families.”

In February, the proposed new policy was approved by the archdiocesan Presbyteral Council, a body of priests who advise Archbishop Vigneron, and a draft was sent to all priests of the archdiocese for their input.

More than 65 percent of the 9,376 students enrolled in Catholic high schools in the Archdiocese of Detroit participate in some form of school-sponsored athletics, said Vic Michaels, director of the Catholic High School League.

Although the league rarely schedules games on Sundays, they are sometimes used as makeup days for rained-out games or scheduling conflicts.

“While not a major change for many of our schools, this policy will help reduce the distractions for families in their pursuit of reclaiming Sunday,” Michaels said. “In shifting our sports to Monday through Saturday, we aim to help our dedicated student-athletes continue following their passions without sacrificing Sunday worship, rest and family time.”

“It definitely impacts (the Catholic Youth Organization) more, and it’s a facilities issue more than anything,” Michaels added. “Over the years, the CYO has doubled, sometimes tripled the number of teams each school has. For example, where schools used to have four teams playing in the parish, a couple for boys and a couple for girls, they now have eight. They’ll be affected by this, but it’s nothing we can’t work around.” The count now numbers just under 1,200 teams.

Archdiocesan CYO director Chris Werner, said parishes and schools will have to get creative in rescheduling games, given the vast number of kids who participate in CYO athletics.

Werner said the CYO is committed to working with programs to find alternative venues and work through scheduling conflicts, adding that families are the reason CYO exists. “We believe in families,” Werner said. “We’re a big proponent of families, and what we encourage a lot of our parishes to do is to incorporate family and faith into their sporting events.”

With the move toward making Sundays more of a day for families, faith and works of charity, Father Pullis said, the Archdiocese of Detroit joins other faith communities in recognizing the need to honor the Lord’s day. “The Archdiocese of Indianapolis has the same policy, as well as other dioceses,” he noted.

Father Pullis pointed to the Archdiocese of Detroit’s involvement with programs such as Notre Dame’s “Play Like a Champion Today” program and SportsLeader as ways the archdiocese seeks to integrate faith and discipleship with athletics, which he said is the primary purpose of Catholic sports programs in the first place.

“This policy calls for athletics to make evangelization and discipleship their highest priority,” Father Pullis said. “We have been working both in CYO and the Catholic High School League to achieve that goal.”

“There are many necessary and worthwhile pursuits which occupy our time and energy all throughout the week, but from the earliest days of the church, Sunday was unique for Catholics,” said Archbishop Vigneron in “The Day of the Lord.”

“Eucharistic adoration, personal prayer, reciting the rosary, time for catechesis and Bible studies, faith sharing groups and the like all are ways families and individuals honor the Lord’s day beyond Sunday Mass,” Archbishop Vigneron said. “We are called to live this whole day in recognition that we are God’s people, intimately united to him through the blood of Jesus, in the power of the Holy Spirit.”

He added, “Too often in our world we are valued by how busy we are. This ‘cult of busyness’ is not of the Lord. Taking the Lord’s day not to be busy with the affairs of the world but rather to rest in more important pursuits honors God and helps us to show him more perfectly to our world. Southeast Michigan needs men and women who can manifest the presence of God through their work and through their rest.”

Work is not inherently bad, but it can warp life’s values when it is seen as life’s greatest pursuit, Archbishop Vigneron said.

“We are not valued by what we can contribute to society. Instead our worth comes from what God has done for us: We are made in his image and likeness, and Christ has died for us,” he wrote. “When we choose to make Sunday a day of rest, we choose to renounce these false cultures and live as part of Christ’s band of disciples.”