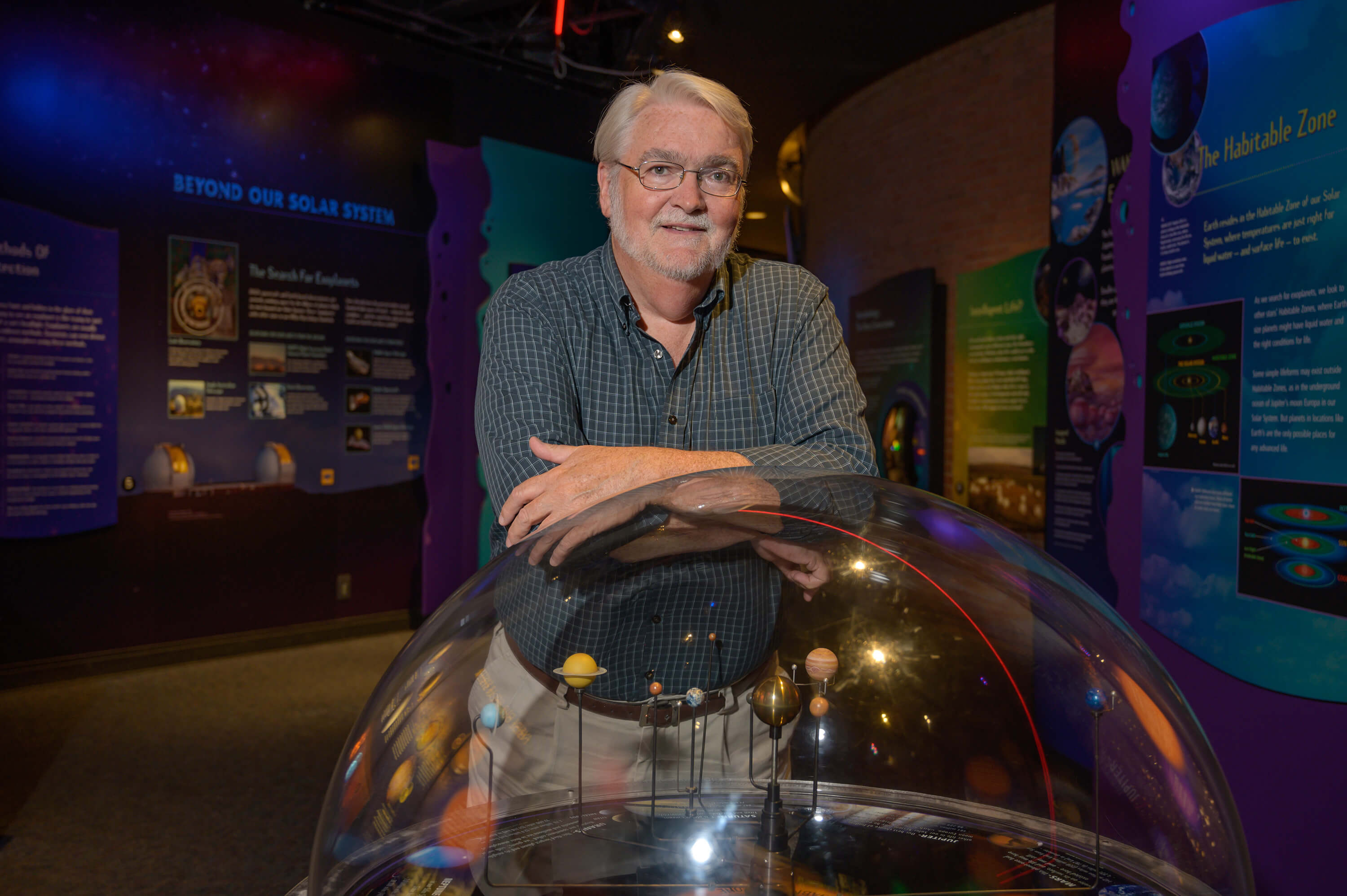 Photo Credit: CNS/Kevin J. Parks, Catholic Review - Jim O'Leary, a parishioner of St. Joseph Church in Fullerton, Maryland, recently retired after working for 44 years as the senior scientist at the Maryland Science Center in Baltimore. O'Leary says his appreciation for the heavens fits in perfectly with his Catholic faith, something he often addresses in his public speaking.

Jim O’Leary has spent the past 44 years looking up into the heavens — a space-age kid who grew up watching astronauts rocketing into the great beyond.

“It fascinated me to no end that we were going into space,” O’Leary said of the NASA effort that reached new heights 50 years this July 20 with the Apollo 11 moon walk. A parishioner of St. Joseph Church in Fullerton, he recently retired as the Maryland Science Center’s senior scientist.

After college, he knew he wanted to share his love of the skies as a space educator. After an internship and a short stint at the Franklin Institute in Philadelphia, O’Leary came to Baltimore. Rose Ann, the young woman he would marry, was one reason. The other was the still-unfinished Maryland Science Center.

In 1975, the brick building was one of the few on the Inner Harbor in downtown Baltimore. The city’s World Trade Center was only partially completed. The National Aquarium and Harborplace were still years away.

O’Leary took on some big projects during his tenure.

The first was overseeing the final construction of the Davis planetarium. He also has shepherded its upgrade to digital projections 11 years ago.

He’s overseen the rooftop observatory with its 1927 telescope bought by the Maryland Academy of Sciences.

“It’s fun to watch people’s reactions,” he said. When a visitor sees something like the rings of Saturn for the first time, they always ask, he said, “It that real?”

O’Leary also led the opening of the IMAX theater in the 1980s, even serving as an IMAX executive producer on several films. He endured 126-degree temperatures in the Mongolian desert filming paleontologists for “Dinosaurs Alive 3D,” a film produced with the American Museum of Natural History. He got a National Science Grant for a film on the human body produced in cooperation with the BBC.

For the bicentennial of the “Star Spangled Banner” he was co-executive producer of “Star-Spangled Banner: Anthem of Liberty,” which recreated the Battle of Baltimore and was shot at Fort McHenry.

What he really likes to do, though, is show people the stars. “That’s what I’ve done basically my whole life,” he told the Catholic Review, the news outlet of the Archdiocese of Baltimore. “I’ve always liked it. I’m fascinated by everything.”

In addition, he has led development of NASA-approved workshops for teachers and for 12 years was co-host of “Skywatch,” a weekly astronomy program which aired on WYPR radio.

He has many reasons for loving the view above him: “the beauty of the sky, the possibility of life, how long it’s been here, the fate of the universe.”

O’Leary says his appreciation for the heavens fits in perfectly with his Catholic faith, something he often addresses in his public speaking.

“Science is about explaining the natural world and understanding the way things work,” he explained.
Religion, he said is “more spiritual.”

“They can cross over,” he added. “They’re certainly not mutually exclusive.”

And he quotes Galileo — twice — as the authority on religion and science: “I do not feel obliged to believe that the same God who has endowed us with sense, reason, and intellect has intended us to forgo their use” and “The Bible shows the way to go to heaven, not the way the heavens go.”

He grew up near Worcester, Massachusetts, and points to the example of the Presentation of the Blessed Virgin Mary sisters who taught him at St. Bernard’s School, and his parish priests, Fathers Tony Marteka and Joe Ash. They inspired him to become an altar server and member of the parish Scout troop.

“I like the sense of community I feel in my own parish, and knowing that that sense exists wherever I might attend Mass,” he said. “I can go to Mass anywhere and know what’s happening and that everyone is there for the same reasons. I’ve attended Mass around the U.S. and Canada (one time offered in French) and in several foreign countries, and felt that familiar sense of community and belonging.”

After he and his wife were married, they joined St. Joseph in time for the birth of their first son. While caring for his aging mother, he was forced to scale back, but for many years O’Leary’s parish activities included serving on the parish council and acting as an extraordinary minister of holy Communion for more than a decade.

His parish has “done a good job welcoming people of various cultures, specifically the Filipino and African-American communities,” he noted. “I see that as a microcosm of what our nation and world should be like.”