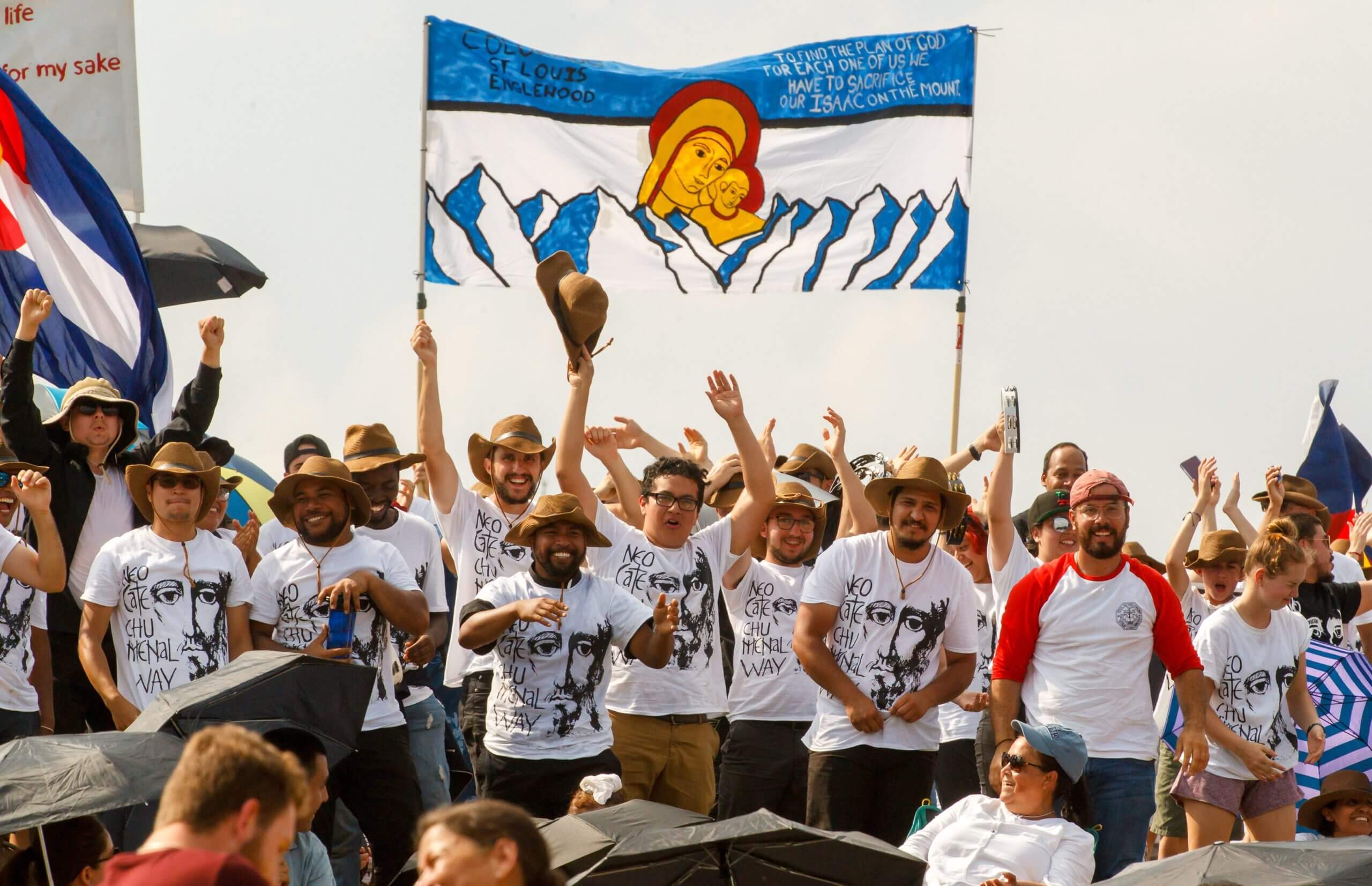 Photo Credit: CNS photo/courtesy Neocatechumenal Way USA - Attendees gesture during a vocational gathering of more than 10,000 young people of the Neocatechumenal Way in Gettysburg, Pennsylvania, in July. Some 250 young men and 400 young women who said they were discerning a vocation received a blessing from Archbishop Christophe Pierre, nuncio to the United States. At least 300 families who said they want to be missionaries also received the archbishop's blessing.

At a vocational discernment gathering of the Neocatechumenal Way in the U.S. this summer, more than 10,000 participants were encouraged to realize that they have “something to do so that the Church may become the Church.”

That message was from Archbishop Christophe Pierre, apostolic nuncio to the U.S., who also told the young people that what they experienced at the gathering is “what the church is all about.”

“God has called us to become, as the church, the living sign of his presence in the world,” he told them at the July 25 event at the Historic Daniel Lady Farm in Gettysburg, part of the town’s vast Civil War battlefield.

Most of the participants arrived in buses from different parts of the country after over a week of being on pilgrimage, stopping at sites linked to the lives of U.S. saints, including Sts. Kateri Tekakwitha, Frances Cabrini and Junipero Serra and those on the road to canonization, such as Blessed Solanus Casey in Michigan and Jesuit Father Eusebio Kino, who has the title “Venerable,” in Arizona.

Also present at the gathering in Gettysburg was crowd with arms raised of Washington, D.C., Bishop Peter Baldacchino of Las Cruces, New Mexico, catechist teams of the Neocatechumenal Way and the religious sisters working at the apostolic nunciature in Washington.

In his remarks, Cardinal Gregory reminded the young people to look inward in discerning the God’s calling for their lives.

“I suppose if Jesus had seen such a large crowd as today … he might say, ‘Well, this makes my job pretty easy, because I have 10,000 people that I can call,'” the cardinal said. “But he calls each and every one of us individually.”

“I know that in this crowd there are many boys and girls and they have a few loaves, a few fish in their pocket. They have a lot to offer. And Jesus calls them … to give to the community this small contribution so that we may become church,” he said.

Toward the gathering’s end, young men who felt God was calling them to the priesthood were invited to receive a blessing from Archbishop Pierre and about 250 responded by walking up to the event stage. Afterward, a vocational call also was made for those discerning the religious life and about 400 young women went to the stage for a blessing.

Finally, a similar invitation was made for young families willing to go anywhere in the world as missionaries and at least 300 families went up to receive Archbishop Pierre’s blessing, with pilgrims from their respective parts of the country cheering them on with song.

For the young men, women and families who responded to the calls, the moment will now be followed by a period of discernment in their parish-based communities on whether to enter the seminary or convent or be sent as missionaries.

In his closing remarks, Archbishop Pierre reminded the crowd to be witnesses “that we have been touched by the love of God and he has transformed our life.”

“All of us need to be happy about that, to thank God, to have a deep gratitude in our hearts,” he said.