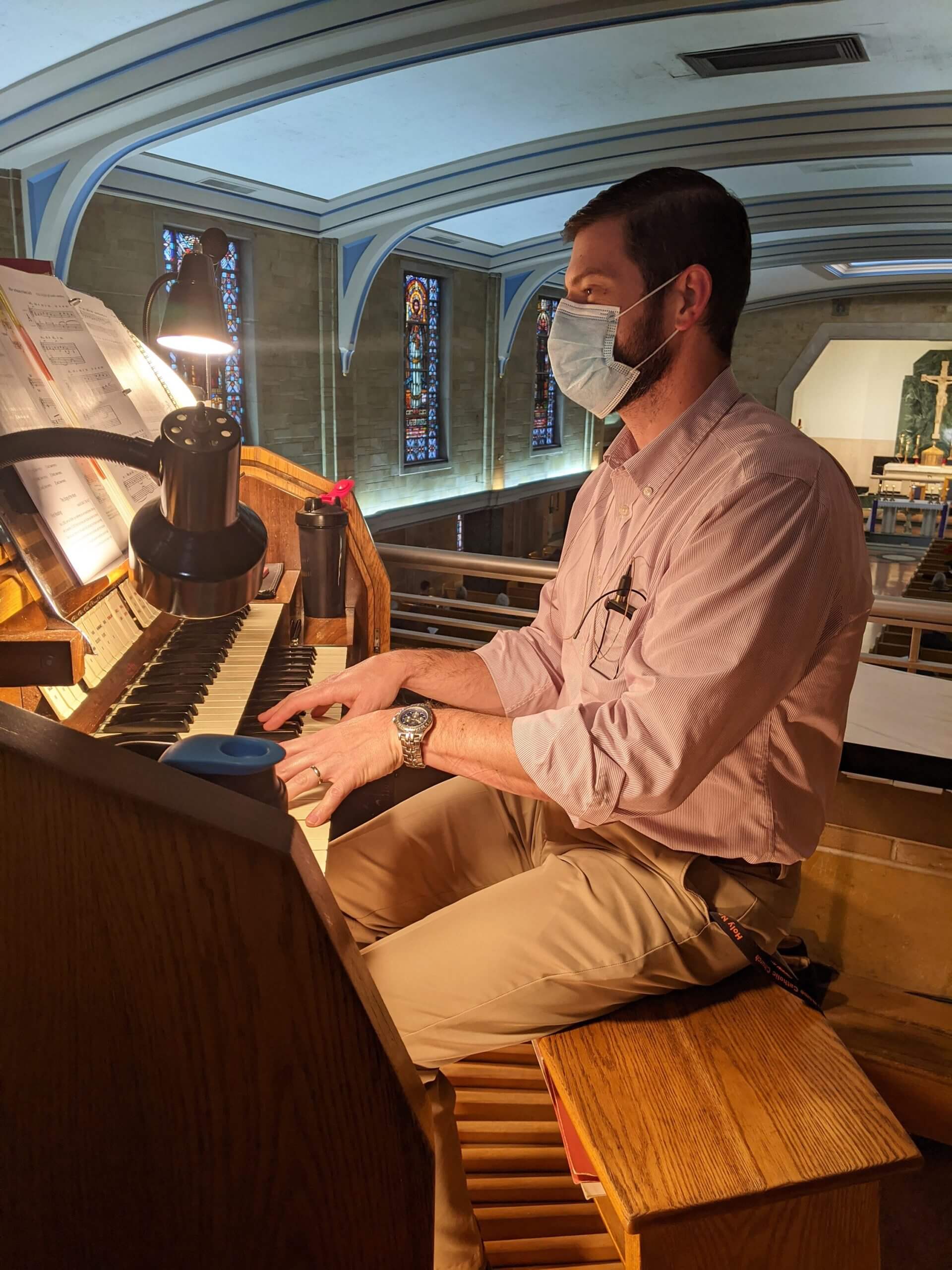 Photo Credit: CNS/Ann Margaret Lewis, The Criterion - Joseph Chrisman, pastoral associate for music and faith formation at Holy Name of Jesus Catholic Church in Beech Grove, Indiana, plays the organ during the Mass on the first Sunday of Advent Nov. 29.

During the Christmas season, we expect to hear and sing carols at Mass as an expression of joy in the birth of Christ.

With the Covid-19 pandemic, however, one of the Church’s complex liturgical challenges has been with its music.

Due to the pandemic, some common safety accommodations have included removing hymnals from pews, forgoing choirs and wind instruments and discouraging congregational singing.

This will likely alter what people will experience musically in the liturgy at Christmas.

In July, while churches were reopening after the lockdown, Andrew Motyka, director of Indianapolis archdiocesan and cathedral liturgical music, provided guidelines to archdiocesan parish musicians on how to deal with the pandemic in their ministries.

“While we didn’t forbid congregational singing,” Motyka said, “even at that time we put it on people’s radars that, especially in smaller spaces, that would be risky.”

Since Covid-19 spreads through droplets emitted from sneezing, coughing, yelling and even speaking and breathing, singing especially becomes an issue with trained singers who can expel droplets and aerosols up to 20 feet.

As a result, the choirs one would normally hear singing at Christmas Masses simply cannot rehearse.

For example, in March, a two-and-a-half-hour choir rehearsal in Skagit County, Washington, made up of 61 choir members, resulted in 32 confirmed and 20 likely secondary Covid-19 cases. Three of these people were hospitalized, and two died.

Transmission of the disease in this case, according to the Centers for Disease Control and Prevention, was linked to singers performing within 6 feet of each other during practice, augmented by the physical act of singing.

It is the potential for this type of spread that led Motyka to advise parish music leaders to also discourage congregational singing. Many parishes are using a single cantor or exploring different musical options.

“They’re starting to rediscover the antiphons,” he said. “Every Mass of the year has a proper text that can be sung during the entrance procession, offertory and Communion.

“As someone who has always been a proponent of using the antiphons and a greater use of the different options that the church provides, it makes me a little happy to see that this is maybe an opportunity to grow a bit in a difficult time.”

Joseph Chrisman, pastoral associate for music and faith formation at Holy Name of Jesus Parish in Beech Grove, Indiana, is one parish music leader who has incorporated the antiphons as part of his music planning.

“We have a great tradition in the Roman liturgy of using antiphons and psalms,” he told The Criterion, newspaper of the Archdiocese of Indianapolis. “Our music is not only inspired by the word, it is the word, the psalms. In many parishes, the psalms and antiphons have been supplanted by the use of hymns and songs.”

Chrisman said he has “tried to hold a balance between singing the liturgy and public safety.”

“The principle refers to the component parts of the Mass rather than singing songs at various stages during the Mass,” Chrisman explained. “This has given me the opportunity to look at many of the different options that the ‘General Instruction of the Roman Missal’ allows for singing.”

After consulting Holy Name pastor Father Robert Robeson, it was decided to aim for a “simple and balanced approach,” he said. “We would continue to sing the ordinaries of the Mass — ‘Gloria,’ the ‘Holy, Holy,’ etc. — as a community, but we would do something a little less familiar with the other parts, for instance the entrance, offertory and Communion (antiphons),” he continued.

Dealing with the Christmas season, however, has required Chrisman and his parish to make some painful musical sacrifices. One of the greatest was canceling its annual Christmas concert, “which would have been our 57th,” Chrisman said.

“The concert is more than just a concert. It is a whole community event, a fixture in our community, that marks the beginning of Christmas for many people. It is months of hard work that culminates in a magical evening of song and praise that we have sacrificed this year in the name of public safety.”

All of this, he added, “makes the musical questions of Christmas all the more relevant.”

Planning for Christmas, therefore, calls for thoughtful planning that respects safety and the expectations of the season.

“As a director,” Chrisman said, “I have to ask myself, is it prudent for a church full of people to sing out ‘O Come All Ye Faithful?”

“Christmas is the culmination of Advent,” he explained. “In Advent, we curb our enthusiasm and prepare our hearts for the coming of the Savior. We finally get the ‘Glory to God’ back after four Sundays of eager anticipation to proclaim with the angel choirs the joyous announcement of Christ’s birth.

“And, we somehow have to hold a balance between Christmas joy and public safety.”

“You can expect some of the traditional Christmas carols, or parts of carols, used in conjunction with the psalms. You can also expect some less familiar music as we continue to limit congregational singing.”

Motyka believes that, like Chrisman, all archdiocesan musicians will be resourceful with their Christmas plans.

“I find that music directors in the church are extremely creative people. Because we work in an idiom that has a strict form to it, you always have to be creative to follow those forms in a beautiful way and in a way that your parish, choir and musicians can handle.

“So, the creative juices are always flowing on that front,” he said. “And I look forward to seeing how people are going to approach it.”