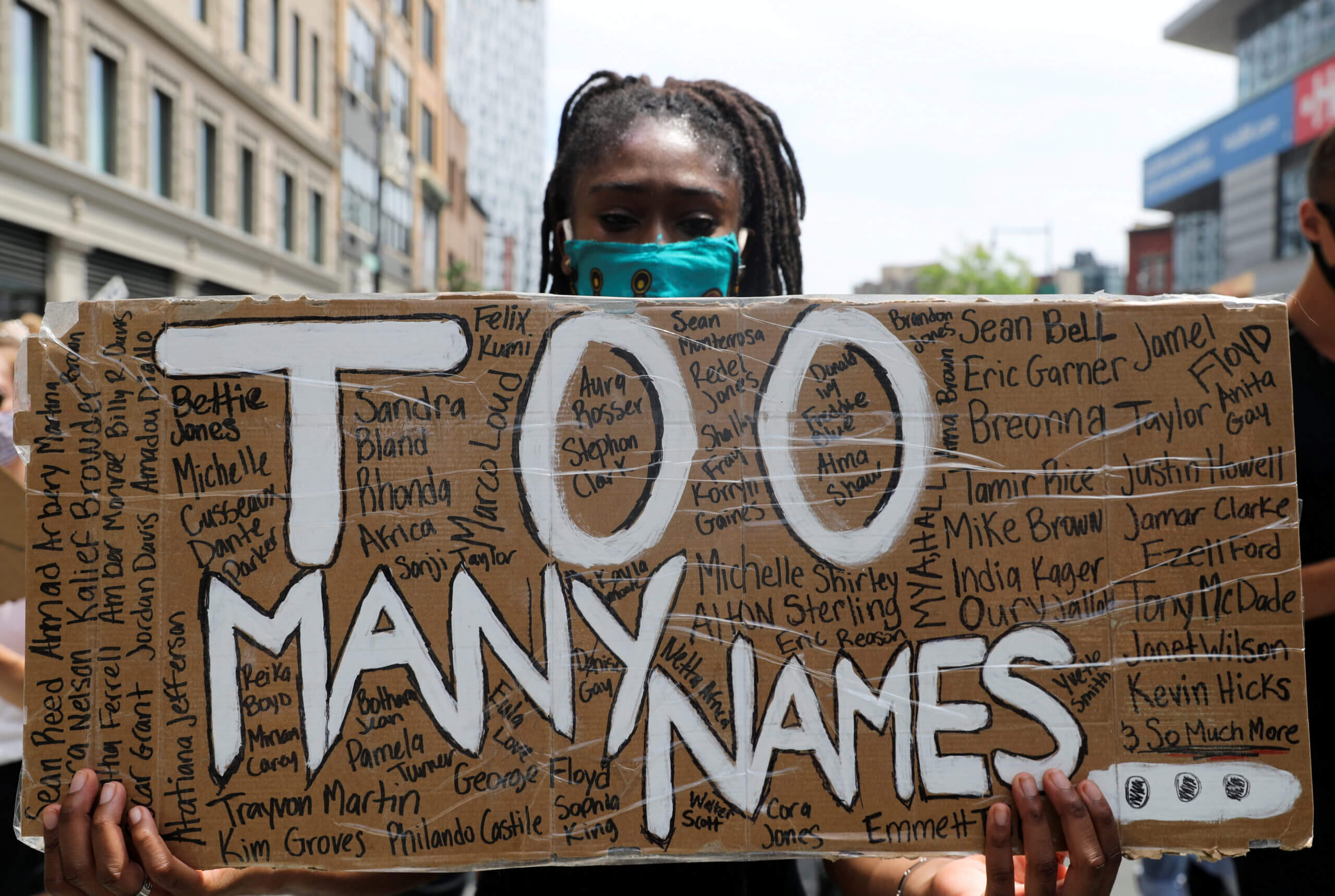 Photo Credit: CNS/Jeenah Moon, Reuters - A demonstrator is seen in the Brooklyn borough of New York City June 6. Demonstrations continue after a white police officer in Minnesota was caught on a bystander's video May 25 pressing his knee into the neck of George Floyd, an African American, who was later pronounced dead at a hospital.

Just as the world is facing the coronavirus pandemic and its deadly impact, racism likewise is a deadly virus that must be cured, Washington Archbishop Wilton Gregory said June 5.

He made the comments during an online dialogue on racism sponsored by Georgetown University’s Initiative on Catholic Social Thought and Public Life. The dialogue was viewed by 7,900 people watching it via livestream.

During the panel discussion on “Racism in our Streets and Structures: A Test of Faith, A Crisis for Our Nation,” Archbishop Gregory was asked why he referred to racism as a virus when he issued a statement about the death of George Floyd — the African American man who died while in police custody May 25, when a white Minneapolis officer knelt on his neck for nearly nine minutes.

“It’s an appropriate image at a moment when we’re all thinking about a virus that threatens us,” he said.

Archbishop Gregory said questions experts are asking in confronting the coronavirus equally apply to racism: “How is racism, this silent but deadly virus, passed on to other people? Is it learned at home? Is it transmitted through our structures? Is it part of the air that we breathe, and how do we find a vaccine, how can we protect ourselves, how can we render it ineffective?”

He opened the discussion with a prayer. He asked God to “bless those who take to our streets to protest injustice” and also prayed law enforcement officers will have “a commitment to equal justice for all, and respect for the lives and dignity of all those they serve and protect from harm.”

Floyd’s death, the nationwide protests it sparked and urgent calls to address racism were the key topics discussed by the panelists, who also included Marcia Chatelain, an associate professor of history and African-American studies at Georgetown University; Ralph McCloud, director of the Catholic Campaign for Human Development, the U.S. bishops’ anti-poverty program; and Gloria Purvis, host of the EWTN radio show “Morning Glory.”

The four panelists, who are all African American, each shared the emotional reactions they felt when they, like people around the world, saw the videotape of Floyd’s death that was recorded by an onlooker during the arrest.

“I recall being physically sick, almost to the point of fainting and passing out,” McCloud said.

Purvis said when she watched it, “I remember saying, ‘Stop! In the name of God, stop!’ I thought this was so grievous to do to another human being. The image of God was being abused in front of me.”

Archbishop Gregory said seeing the video of Floyd’s killing brought back a flood of memories.

“As a youngster, I was taken to the viewing of Emmett Till,” he said, of the 14-year-old African American youth lynched in Mississippi in 1955, whose body was displayed in an open casket in Chicago where he grew up, and which was the home city of young Wilton Gregory.

The archbishop, who also issued a statement decrying the recent shooting death of Ahmaud Arbery, a young African American man, by white assailants in Georgia, said that Floyd’s death reminded him of “a whole collage of individuals who have been assassinated for no other reason than the color of their skin.”

Chatelain said Americans were able to witness Floyd’s last moments, and are also “witnesses to the indifference that allows death to come that way. … The knee on that man’s neck was weighted by all of the systems that have sanctioned that behavior.”

She said the protests across the United States and around the world represent “a referendum about capitalism, colonialism and at the heart of it, white supremacy. … This is about a series of interconnected systems.”

The educator noted the societal inequities facing communities of color are not new. In the commissions established to examine the deadly race riots of 1919, she said, black leaders a century ago identified the problems of “police brutality, not enough jobs, poor schools for our kids (and) lack of health care.”

McCloud, who is recovering after being diagnosed with Covid-19, noted racism does not operate in a vacuum, and he said many injustices faced by minority communities were factors in them being disproportionately impacted by the virus and the health crisis and economic downturn left in its wake.

He noted how many African Americans and other people of color live in overcrowded housing where social distancing is impossible, in communities where health care is inaccessible, and work in service industries where they were deemed “essential” and had to continue working and possibly being exposed to the virus. And he noted how the predominantly minority populations in prisons also faced sickness and death from the virus because of crowded conditions there.

Knowing family members and friends sickened and dying of the virus has become a reality for many minorities, he said. And this spring has seen several notorious instances of black Americans being killed by police officers.

“There’s a degree of stress and a degree of trauma associated with being African American in 2020, given all that we’ve experienced,” McCloud said. He noted how one of his nephews was paralyzed after being shot by police. “His only crime was walking away from the police.”

Purvis, who is the chairperson for Black Catholics United for Life and a board member of the Northwest Pregnancy Center, said the pro-life and the racial justice movements are both “animated by the Gospel imperative that we must defend the vulnerable and the oppressed.”

She said the protests that followed George Floyd’s death have happened because “we don’t want the power of the state used against us. … We are equal citizens and do not want police brutality on our communities.” She added, “The real issue is that a human being had his life snuffed out by the very state that is paid to protect and serve. That’s what Black Lives Matter means. We want to be able to walk, to live, and move without fear, like everybody else.”

The panelists all expressed admiration for the people protesting racism and police brutality across the country.

“I get so much hope, and I get so much inspiration from people who are day in and day out in the streets,” Chatelain said. “They’ve been undeterred by tear gas, undeterred by threats of state violence. I’m so deeply moved by everyone who turns out the next day.”

Archbishop Gregory called it a “a big sign of hope is the huge number of young people who have taken up this as a personal concern,” and he noted how “a group of young priests have decided by Zoom meeting to come up with proposals that they intend to implant in their parishes. … They are energized, and I want to encourage them to continue that dialogue.”