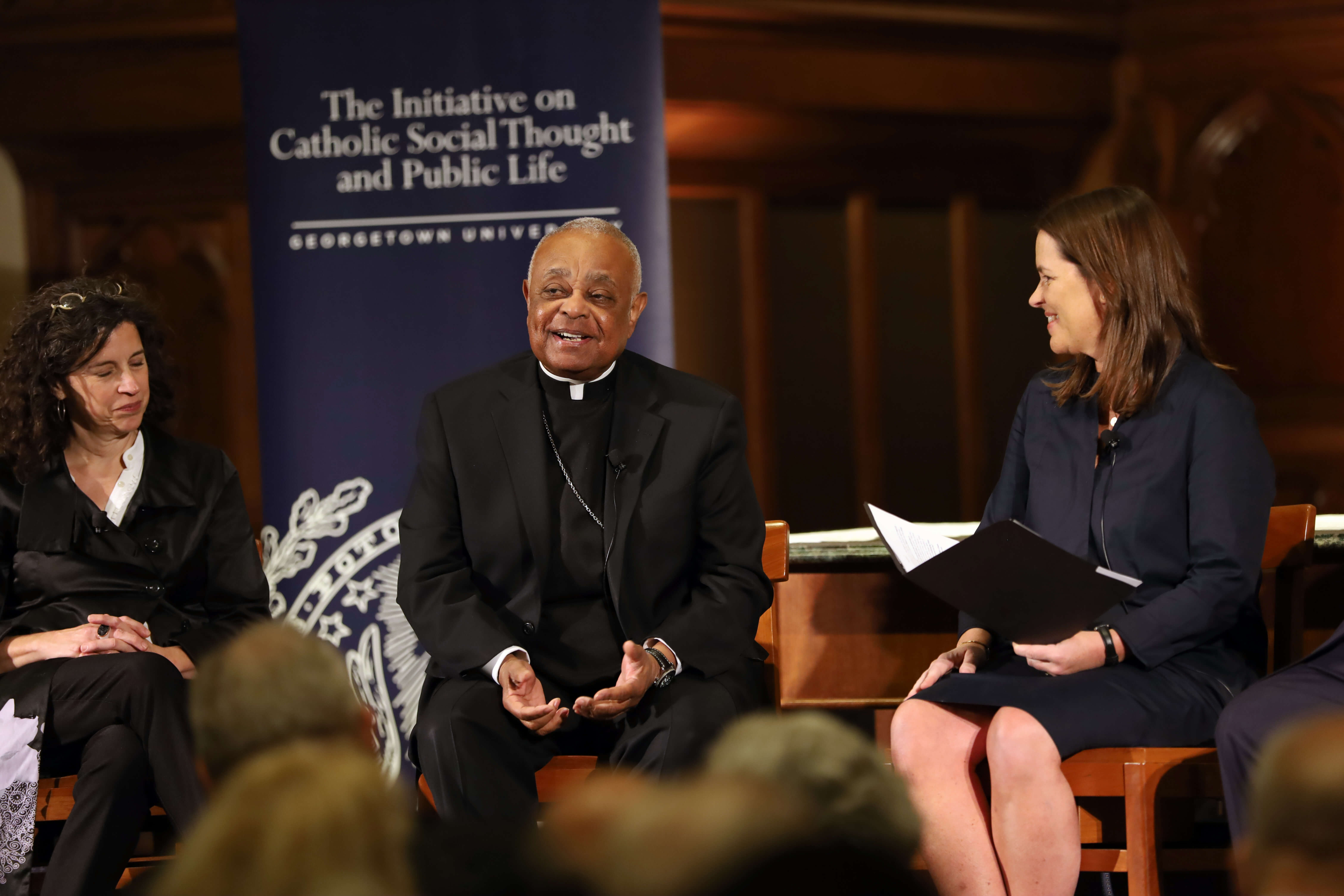 Panelists say from day one, pope showed world he’d be a pastor

First impressions of Pope Francis in 2013 revealed his style and pastoral priorities, and since then, his words and actions have continued to inspire and challenge the Catholic Church and the world, panelists said at a Nov. 21 dialogue on the “Francis Factor Today” at Georgetown University.

Washington Archbishop Wilton D. Gregory, one of the speakers at the Dahlgren Dialogue, held in the university’s Dahlgren Chapel of the Sacred Heart, said a “pivotal moment” for him in understanding the new pope came when the pontiff celebrated Mass at St. Anna Church in Vatican City a couple days before he was inaugurated.

“He came out of church when Mass was over and he stood and greeted people. He did what most good pastors do every Sunday. He encountered his people by shaking their hands, hugging babies. … He told us by that gesture that this pontificate would be pastoral in dimension,” Archbishop Gregory said.

“That’s a key factor in understanding his pontificate,” he added. “He is a pastor, and he approaches the papacy from that perspective.”

Panelist, John Carr, director of Georgetown University’s Initiative on Catholic Social Thought and Public Life, noted that after being elected, Pope Francis explained how a veteran cardinal during the conclave had reminded him not to forget the poor, and that inspired the choice of his name as pope, modeling himself after St. Francis of Assisi.

“Francis said, ‘That’s when I decided I shall call myself Francis, a man of the poor, a man of peace, and a man of creation. I hope we’re a poor church for the poor,” said Carr, recounting the new pope’s words. “We knew from the first moment (he was a pope for) the poor, peace and creation.”

Carr noted how Pope Francis demonstrated his concern for the poor during his 2015 visit to Washington, when right after addressing members of Congress, the pope went to meet people being served by Catholic Charities in the nation’s capital.

The third speaker, Helen Alvare — a professor at the Antonin Scalia Law School at George Mason University — said, “I think of Francis’s pontificate as an extended meditation on the good Samaritan story. He is highlighting who are the people strewn on our path right now, and that’s been a change over time over different papacies.

Alvare said Pope Francis’ biggest impact on her personally — and as a parent concerned with transmitting the faith to her children and sharing the faith with others through her work — has been to inspire her to rely on prayer.

The pope’s example, she said, also tells her that before you do anything you first must know what God wants. “First, be a person of faith, first be a person who can bring Christ with you (to others).”

The Dahlgren Dialogue series — which also was co-sponsored by Georgetown University’s Office of Mission and Ministry — drew a capacity crowd to the ornate chapel.

Moderated by Kim Daniels, associate director of the Initiative on Catholic Social Thought and Public Life, noted: “We’re in a very volatile political moment in our country, and we’re obviously also in a very polarizing time for our church as well.”

She asked the three speakers about their perspectives on how Pope Francis has challenged the church and the world, and how have the realities in the church affected him, and how has he responded.

Archbishop Gregory noted that Pope Francis has emphasized reforming the Vatican’s Curia as a key priority. “He is a pope who never worked in Rome, and that is real clear in the way he looks at the organizational structure there.”

The archbishop also noted how the pope is working to address the clerical sexual abuse crisis in the Catholic Church, which the Vatican has come to understand is a global issue, not just an American problem.

Daniels asked the speakers about the opposition that the pontiff has faced and about polarization in the Church.

“Pope Francis is not the first pope to encounter opposition,” said Archbishop Gregory, who pointed out the criticism that St. John Paul II faced from some in the Church after hosting an interreligious prayer service in Assisi.

“The thing that I think makes it different now is social media. The opposition now has a microphone that has no volume control on it,” he said.

Pope Francis, Carr said, “looks at the world from the bottom up, from the outside in.”

He said many people became “obsessed with a footnote” in the pope’s 2016 apostolic exhortation on marriage and the family, “Amoris Laetitia” (“The Joy of Love”) ,that seemed to offer an opening for divorced and remarried Catholics to receive Communion. He also noted how much attention at the Vatican’s recent Synod of the Bishops for the Amazon was drawn to a controversial sculpture exhibited there of a pregnant native woman.

“I think we have been diverted from this special message (of Francis’ papacy) into a particularly North American fight where we bring our old baggage and battles,” Carr said.

The resistance to Pope Francis from some on the right “is both more than I expected and less than it appears to be,” said Carr, who added he believes the opposition is strong and powerful but narrow.

“It needs to be taken seriously when it involves real concerns about doctrine and passing on the faith,” he said. “We can have discussions about pastoral style and priorities. I think there are factions within the church where this is not about those things, this is about ecclesial, political and economic power.”

Alvare said she thinks Catholics in the United States are filtering Pope Francis and his teaching through interests and so feel he does not emphasize certain teaching enough.

Pope Francis could alleviate some confusion among American Catholics, she said, by forcefully articulate “why there is no daylight whatsoever between (church teaching on) the love of one another in sex, marriage and caring for the respect for life and the love to take care of the person strewn across the path like a good Samaritan.”

Alvare also noted Pope Francis “says big things about the role of women in the Church. … He talks about women, like men, being of mutual service to one another, to the Church, to the world, and not servitude.” He has called for “more places for women everywhere in the Church,” she said, adding that women are playing leading roles in the Vatican’s Dicastery for Laity, Family and Life; women are also serving as chancellors and in many other top posts at diocesan levels.

Archbishop Gregory noted it was a woman in his former archdiocese, Atlanta, who led the effort to write a pastoral plan there to implement Pope Francis’s 2015 encyclical on the environment, Laudato Si’, on Care for Our Common Home.”

The encyclical, he said, “is a pastoral theological statement that has to be filtered down so people can take it and implement it,” and in the Atlanta Archdiocese, Susan Varlamoff, a retired director of the University of Georgia’s Office of Environmental Sciences, helped Catholics bring that teaching to life on a personal, parish and industrial level.