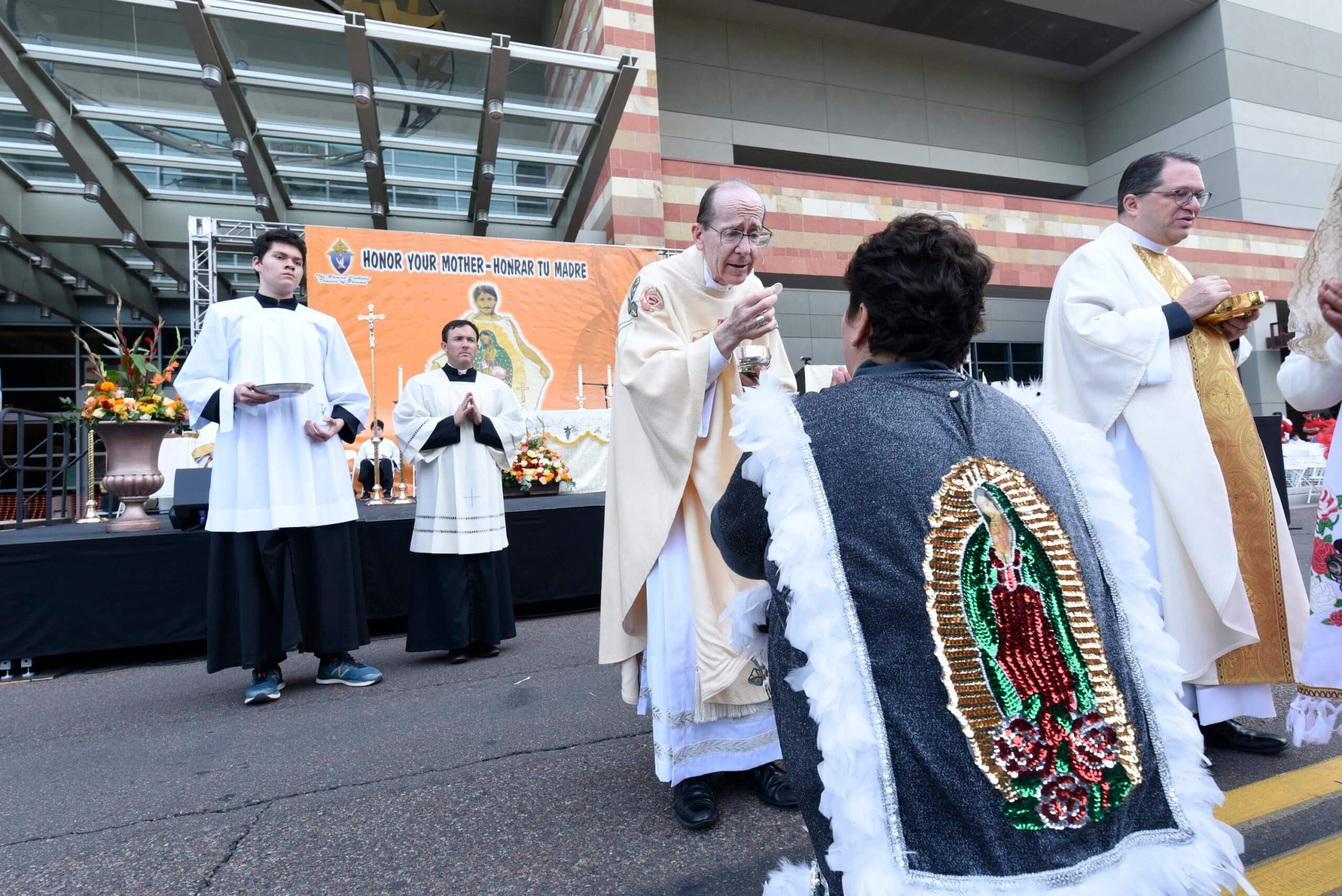 Photo Credit: CNS/Jesus Valencia, Catholic Sun - Bishop Thomas J. Olmsted of Phoenix distributes Communion in this 2019 file photo. The bishop issued a pastoral letter Jan. 28, titled "O Sacred Feast" and aimed at bolstering Catholics' faith in the Real Presence in the Eucharist. Bishop Olmsted also planned to release an apostolic exhortation on the Eucharist on the feast of the Lord's Supper, Holy Thursday, which this year is April 1.

One year into the Covid-19 pandemic, Bishop Thomas J. Olmsted of Phoenix has written a pastoral letter to the faithful aimed at bolstering faith in the Real Presence in the Eucharist.

The letter, “O Sacred Feast,” was released Jan. 28, the feast of St. Thomas Aquinas, whose writings have shaped hundreds of years of theology and whose hymns of praise for the Eucharist helped inspire the letter’s title.

The missive was issued as a precursor to an apostolic exhortation on the Eucharist that will be published on the feast of the Lord’s Supper, Holy Thursday, which this year is April 1.

“Many have shared with me the heavy grief they have carried during the Covid-19 pandemic at the loss of regular accessibility of the great sacrament of the Eucharist,” the pastoral states. “As a spiritual father and spouse of the church, it grieves me to see the flock entrusted to my care suffer separation from the Lord whom I have dedicated my life to serve and to make present among his people.”

Public Masses were suspended last spring as the Covid-19 virus spread across the diocese and the globe, threatening the lives of millions. Although priests continued to celebrate Mass privately, the faithful were unable to be present except virtually, even during the Triduum.

Parishes quickly adapted, livestreaming their Masses. Priests heard confessions outdoors or in drive-up fashion. Currently, public Masses have been reinstated but, due to grave health concerns, some have stayed away.

The sorrow at being apart from their parishioners — some of them for almost a year — has hit priests hard.

Father Fernando Camou, associate director of the Office of Vocations and vice rector of Nazareth House Seminary, helps out at parishes all over the diocese on Sundays since he’s not assigned to a particular parish. He has seen the hurt.

“There’s a grief of the loss of that connection that you want to have with your flock, the people that you’re serving,” Father Camou told The Catholic Sun, the online news outlet of the Phoenix Diocese. “You want them to know the Lord that you know and fall in love in the same way that you are.”

The pastoral letter about the Eucharist from Bishop Olmsted, the priest said, is intended to provide a word of encouragement and is a call to greater faith, even if people are unable to receive the Eucharist in person due to serious reasons.

Then there’s a fear among pastors that some parishioners may never return.

The bishop also points to 49 early Christians who were martyred for the faith in the fourth century during the reign of Diocletian. When asked why they continued to illegally celebrate Mass, they said: “Without the Sunday Eucharist, we cannot live.”

It is that kind of love for Jesus in the bread of life which Bishop Olmsted seeks to stir up with the letter and forthcoming apostolic exhortation.

“The bishop is saying, ‘We need to focus on the Lord.’ What we need is eucharistic faith, a radical, bold awareness,” Father Camou said.

Father John Parks, pastor of St. Theresa Parish, called the letter a “clarion call to really preach and live the Eucharist” and said the No. 1 reason people should come back to church is the Eucharist.

Bishop Olmsted spoke about the pain of Catholics’ separation from the Lord in the Eucharist in a telephone interview about the pastoral letter.

“There are some who really love the Eucharist and it’s a time of great pain, but it’s a healthy kind of pain,” Bishop Olmsted told The Catholic Sun.

For others, the pandemic may have contributed to a growing increase in the number of Catholics who do not believe in the Real Presence. The letter and apostolic exhortation are meant to address this crisis of faith and reinspire Catholics to a deeper love of God in the Eucharist.

The way to revitalize a faith grown cold, the bishop said, isn’t through words though. It’s witness.

“I think the primary way is through our own burning love for Jesus in the Eucharist. I think there’s nothing more compelling,” Bishop Olmsted said.

He referenced the late Cardinal Nguyen Van Thuan of Vietnam, who spent 13 years in re-education camps, nine of them in solitary confinement.

“His love for Jesus in the Eucharist was so great that the Vietnamese officials finally couldn’t wait to get him out of the country and get him out of the prisons because so many guards kept converting” to the Catholic faith, Bishop Olmsted said.

Share This Post
Eucharist, Evangelization and Catechesis, Bishop Thomas Olmsted, Phoenix
See More
Last Article
New ministry to support those who are ill, alone
Next Article
Remembering to leave ‘the corners of our fields’ for others
Back to Vermont Catholic Magazine