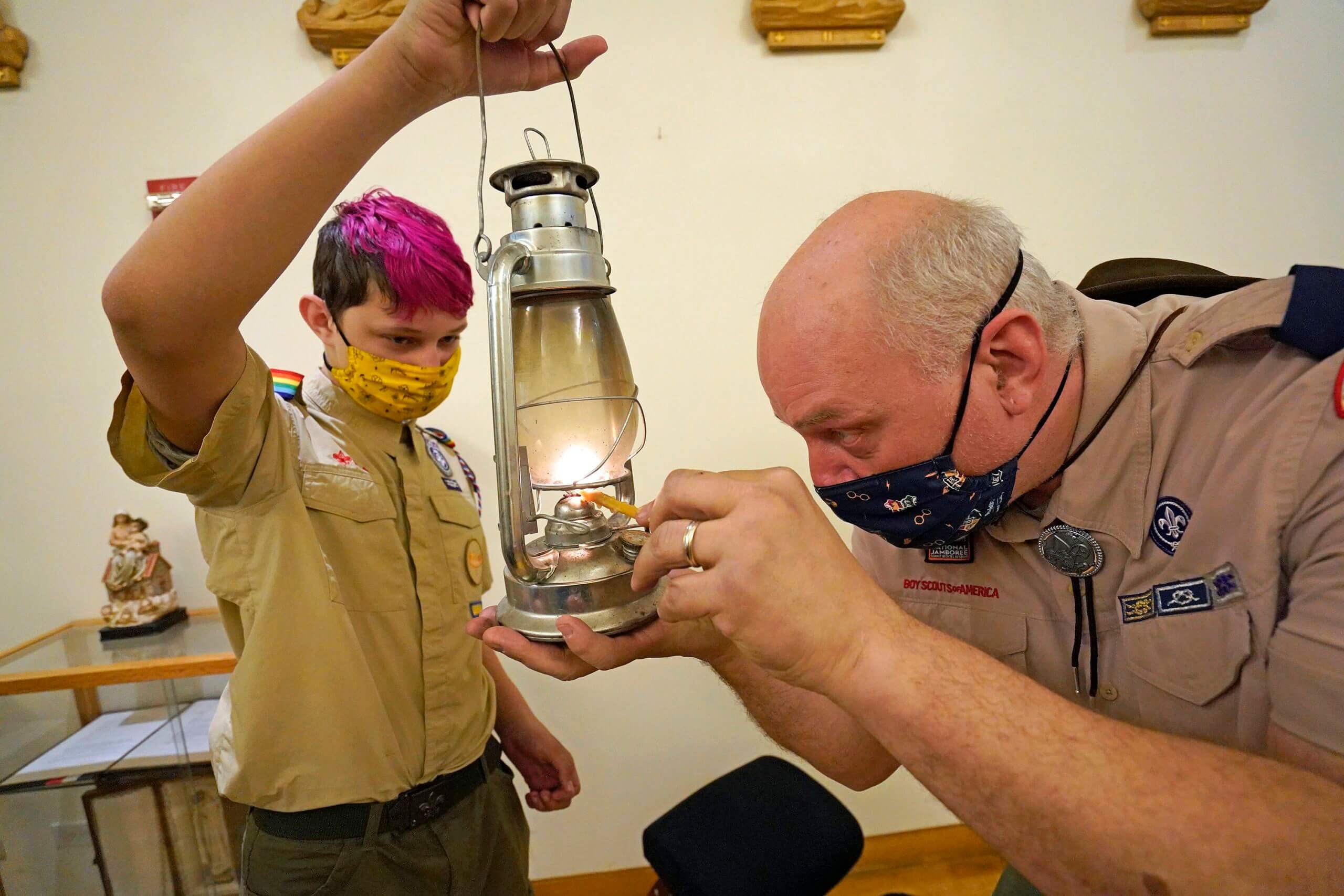 Photo Credit: CNS/Gregory A. Shemitz - Boy Scout leader Chris Dono, a parishioner at Immaculate Heart of Mary Catholic Church in Brooklyn, New York, lights a lantern held by his son Thomas, 14, using a flame transferred from the International Peace Light during a welcoming ceremony following the Peace Light's arrival at John F. Kennedy International Airport in Jamaica, New York, from Vienna earlier this month. Boy and Girl Scout leaders, along with other volunteers, form a network to drive the flame — which originated in the grotto of the Church of the Nativity in Bethlehem, West Bank — to houses of worship, homes and other venues throughout North America.

A flame of light from the grotto in Bethlehem’s Church of the Nativity is making its way around the world, including across the United States.

Boy Scouts, Girl Scouts and other volunteers carry the light and transfer it — sometimes in lanterns, sometimes with small candles. Volunteer drivers travel across the U.S., meeting groups at truck stops and other places. Some volunteers post their whereabouts in a Facebook group so others can meet them and spread the flame.

The flame arrived at John F. Kennedy International Airport in Jamaica, New York, Dec. 11. At the airport, numerous lanterns were lit by the flame and began their journey to houses of worship, hospitals, senior citizen homes, homeless shelters, prisons and other locations in cities and towns and other venues across North America.

The Staten Island Chapter of the Polish Scouting Organization shared the Peace Light at 11 a.m. Mass at St. Stanislaus Kostka Church Dec. 12. It has been shared at Our Lady of Lourdes Church and School in Indianapolis and St. Thomas Aquinas Catholic Church, the Catholic university parish at Purdue University in West Lafayette, Indiana, and at St. Michael’s Church in Orland Park, Illinois.

The Peace Light’s journey can be traced back to a tradition in Austria. For 35 years, an Austrian Scout has traveled to Bethlehem, West Bank, to kindle a flame from the oil lamps hanging above Christ’s birthplace at the Church of the Nativity.

The fire is kept in two explosion-proof British mining lamps, fueled by smokeless paraffin oil, and flown with a safety adviser to Austria. There it is distributed at a service of dedication to delegations who take it back, with a message of peace, to their own countries for use at ecumenical services.

Canadian Scouts first brought the Peace Light to ground zero in New York in 2001 after the 9/11 terrorist attacks.

In 2002, DHL delivered the Peace Light as a gift from Belgian Scouts and Guides to the Boy Scouts of America in New York. In 2003 the light didn’t make it to the U.S.; however, members of the Brooklyn Diocesan Scouting Committee had kept the 2002 Peace Light burning and spread that around the Diocese. Since then, Austrian Airlines has continued to bring the Peace Light to the United States each year.

The welcoming ceremony for the light at JFK was sponsored and coordinated by the Catholic Committee on Scouting of the Diocese of Brooklyn and Queens.