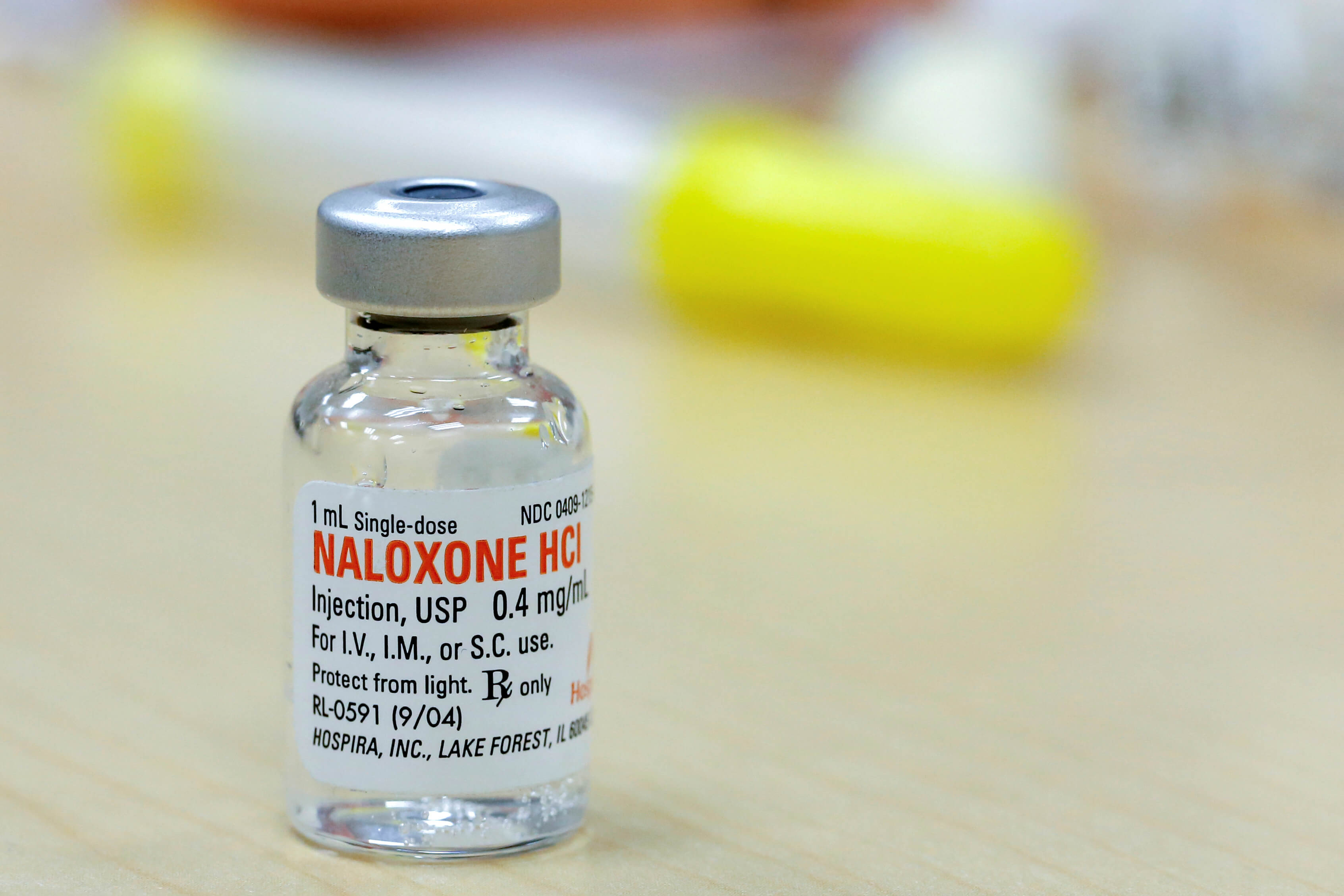 Photo Credit: CNS/Andrew Kelly, Reuters - The drug Naloxone sits on a table during a free Opioid Overdose Prevention Training class provided by Lourdes Hospital in Binghamton, N.Y., in 2018. In advance of upcoming corporate annual meetings, institutional investors, including religious congregations, have filed 250 shareholder resolutions with 163 companies to address important social concerns such as the opioid epidemic.

The 53 members of Investors for Opioid Accountability have used their financial and moral influence as shareholders to gain agreements from corporate officials to better track distribution of the highly addictive class of drugs.

Donna Meyer, director of shareholder advocacy for Mercy Investment Services of the Sisters of Mercy, said the investors have experienced successes as well as struggles through multiple actions that have included the filing of shareholder resolutions for consideration at corporate annual meetings and long-term direct engagement meant to change company practices.

“We’ve taken a social case and made a business case out of it,” Meyer told Catholic News Service.

While continuing throughout the year, the prominence of such efforts rise as corporate annual meeting season approaches each spring.

Meyer said such work on behalf of faith-based organizations extends from their moral convictions on the dignity of all human life.

At the same, she added, investors of all types want their portfolios to continue to grow, and their actions are rooted in heading off practices that pose financial risks and can damage a company’s reputation.

“We’re all investors, so we own a piece of the companies. We have a right (to file resolutions),” Meyer said.

The opioid epidemic continues to wreak havoc on families across the country. In 2017, 17,029 people died from overdosing on prescription opioids, about the same number as the year before, according to the Centers for Disease Control and Prevention. However, the number of overdose deaths involving any opioid climbed to 47,600 in 2017, the most recent year that statistics are available.

Those figures contrast with 1999, when 3,442 deaths occurred among people overdosing on prescription opioids and 8,048 people died from any opioid overdose.

The impact of opioid addiction has reached various individual investors that have experienced the negative economic and social effects. During the 2017 annual meeting of the Interfaith Center on Corporate Responsibility in Grand Rapids, Michigan, Meredith Miller of the United Auto Workers Retiree Medical Benefits Trust approached Meyer about working together to curb opioid addiction and abuse because of their role as corporate shareholders.

In some cases, shareholder resolutions have been filed and then withdrawn based on a company’s willingness to report on their practices publicly and look at ways to better monitor opioid distribution.

Allergan, Cardinal Health and CVS Health have been particularly responsive to shareholder concerns, according to information shared by Meyer. In other cases, including Walgreens and Dutch-owned Mallinckrodt, shareholder resolutions seeking better governance measures to monitor and manage risks related to opioid distribution have been filed are expected to come up for a vote at upcoming annual meetings, she said.

Opioid abuse is just one of many concerns among investors seeking more socially responsible corporate behavior this year.

During a Feb. 21 webinar, Julie Wokaty, associate communications director for ICCR, said its members had filed 250 resolutions with 163 companies by the end of January. Some resolutions have been challenged by companies through the Securities and Exchange Commission while others have been withdrawn because of “engagement” over company practices, she said.

The resolutions focus on dozens of issues such as political contributions and corporate lobbying, climate change, human rights violations of immigrants in the U.S. and international workers, technology advances that threaten personal secrecy, prescription drug pricing and environmental concerns including climate change.

Elsewhere, tropical deforestation has been a concern of the Seventh Generation Interfaith Coalition for Responsible Investment in Milwaukee for several years. Frank Sherman, the coalition’s executive director, said a resolution on the issue was filed with Restaurant Brands International, which owns Burger King, Tim Hortons and Popeyes Louisiana Kitchen.

“They’re consuming these unsustainable commodities and they are facing risk. It starts with their reputation. Their brands don’t want to be accused of participating in deforestation,” Sherman explained.

Mark Peters, director of justice, peace and reconciliation for the Priests of the Sacred Heart, U.S. province, told CNS the order has filed resolutions with Cincinnati-based Macy’s Inc. and TJX, the parent company of TJ Maxx, HomeGoods and Marshalls.

The order’s concerns focus on the human rights of workers producing the goods offers by both corporations’ retail stores.

“We are asking them to put human rights more at the center of how they are monitoring and auditing their supply chain network,” Peters said. “We want to make sure the companies are looking at the current process they use for vendors (and that it) is very much focused on what is the law.”

Peters explained that companies know that their practices are under scrutiny by shareholders and customers alike.

“They are enlightened enough to realize they need some policies in these areas, and many have fantastic-sounding policies,” he said. “But having the policies and making sure they are being carried out and checking into the nooks and crannies is what we’re trying to do here.”

Macy’s, for example, has had a vendor code of conduct in place since 1995. Posted on its website, the code sets “clear, stringent standards and requirements” for company suppliers. The company said it stopped doing business with 67 factories for noncompliance with the code between 2013 and 2016.

Peters appreciates such efforts and has found companies “do listen in dialogue.”

“We’re not trying to get them to do anything that’s not in our best bottom line interest either.”

Still, the Priests of the Sacred Heart want to be sure that Macy’s is living up to its vendor code. The order’s resolution filed with the retailer seeks a report by December “on the company’s process for identifying and analyzing potential and actual human rights risks of operations and its supply chain.”

Even before her official canonization in 1925, Father Daniel Brottier credited the intercession of [...]