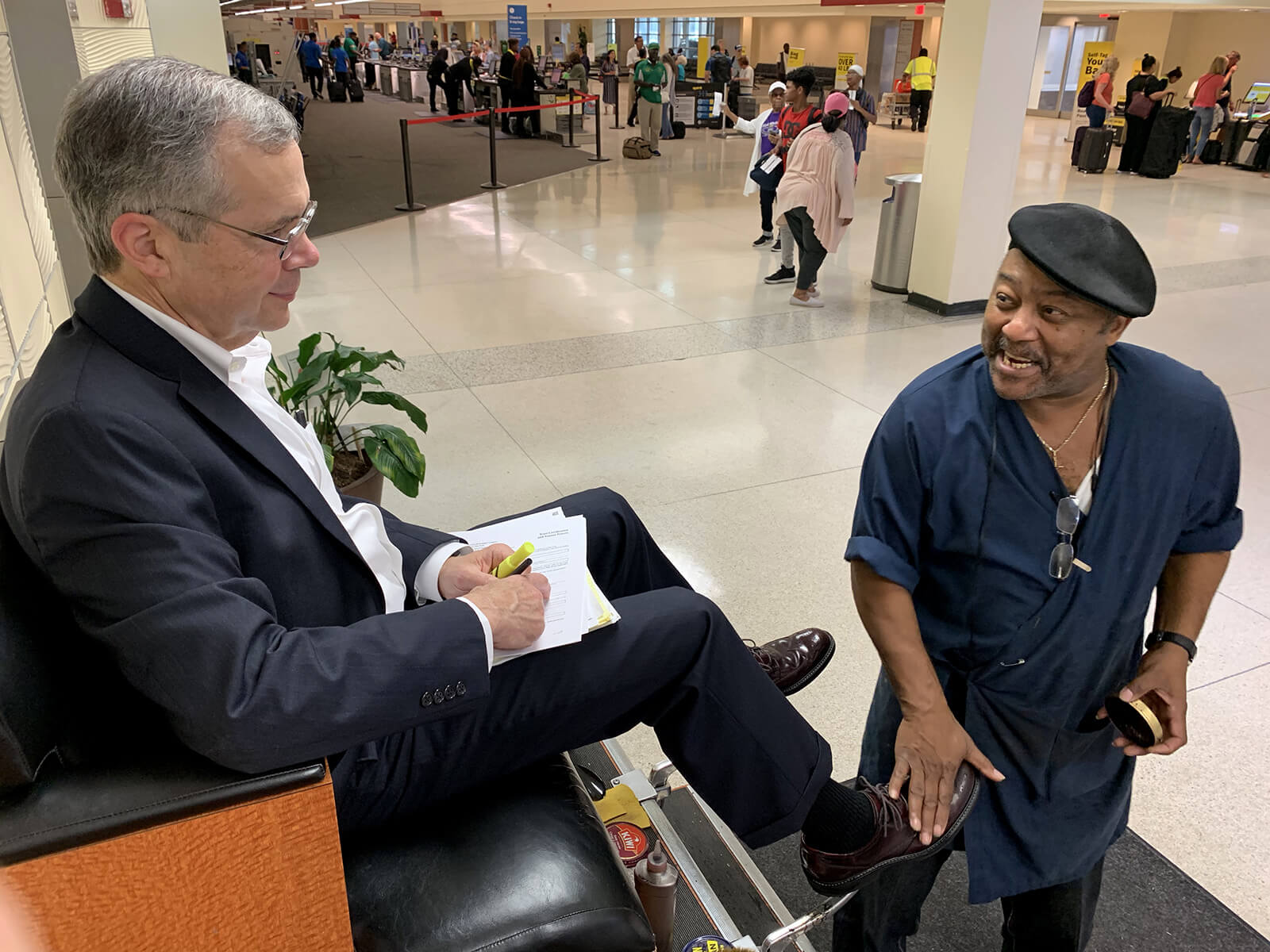 Photo Credit: CNS/Peter Finney Jr., Clarion Herald - Wayne Kendrick shines shoes at Louis Armstrong International Airport in New Orleans. He has polished shoes at the airport for 35 years and shares his Catholic faith with customers and co-workers who ask for prayers.

From his elevated perch on the shoeshine stand near Concourse C of Louis Armstrong International Airport — a nondescript wooden platform with two blue-padded chairs and four metal footrests — Wayne Kendrick notices everything and everyone.

He is Catholic, and some have described the chair from which he waves and smiles to his fellow airport employees and to the thousands of travelers who daily roll their luggage past him as a sacred post.

“I’ve had a couple of pastors come and say, ‘You know, Wayne, this is your pulpit,'” said Kendrick, 60, who recently was honored by the New Orleans Aviation Board for his 35 years of service as “the mayor of the airport.”

That unofficial title was right there in the resolution the board bestowed on him in July. It was affixed with a gold stamp and accompanied by a lot of pomp and circumstance — and jockeying for position.

“The board members are all my friends,” Kendrick said, smiling about the resolution signed by board chairman Michael Bagneris and now framed in his house. “Mr. Bagneris said, ‘We were fussing over who was going to deliver this to you, so we did paper, scissors, rock.’ That made me feel kind of good. When they stood up — the whole room — I really got weak-kneed, but I didn’t show it. The last time I had people stand up and clap for me, I was playing basketball (in) high school.”

Since accepting his father Richard’s invitation April 12, 1984, to join him at his original airport shoeshine stand, Kendrick has done what has come naturally. He has developed a sixth sense in knowing what a traveler might be going through. Sometimes, passengers tell Kendrick they are flying out of town to “bury their mother.”

“In that situation, I do not take their money, and I’ve had them come back to the airport with their kids and they say, ‘This is the guy who when I was coming to bury your mom, he shined my shoes and wouldn’t take any money,'” Kendrick said. “I got my mom’s values and my daddy’s talent.”

Sometimes, people, especially his airport co-workers, stop by just to sit and chat. On a recent morning, Kendrick either greeted by first name or fist-bumped every co-worker who passed by.

“They got a lot of young kids around here, and they look up to me and respect me,” Kendrick said. “I know when something is wrong with them. I look in their face every morning. I’ve seen them pass me by and I’ll say, ‘What’s wrong?’ And they’ll say, ‘Ain’t nothing wrong.’ And I’ll say, ‘You can tell me when you come back.’ They’ll ask how I know. And I say, ‘Because I look at you every morning, and I know when something’s wrong.’ Some of them don’t have anybody to talk to. Some of them don’t have father figures. So, this is what I do.”

Kendrick’s father will turn 84 in October — he lost his wife of 62 years in 2015 — and with his waning health, he’s had to decline his son’s invitation to join him at the airport for half-days.

“He told me, ‘Wayne, you know, I used to work for your Maw. Your Maw wanted things. Maw doesn’t want anything no more because she’s gone,'” Kendrick said. “All I could do was hug him.”

When they were working together as a team in the early 1990s, a woman was sitting in a chair nearby. She had been dropped off at the airport by friends, but she had left her purse, wallet and ticket in the car as they drove back to Baton Rouge. There were no cellphones. She was going to miss her flight.

Kendrick and his dad left for the day. Three months later, five nuns in habits were walking down the concourse past the shoeshine stand.

His talks with passengers and co-workers about their families sometimes evolve into requests for prayers. Cliff White, a Delta Airlines flight attendant, said Kendrick got him through his daughter’s serious illness with prayer for four years.

“This same girl, in seven days, I will take her up to Troy, New York, to put her in the dormitory at Rensselaer Polytechnic Institute for engineering,” White said. “That’s the same girl he saved.”

Kendrick uses small pieces of notepaper to compile a growing prayer list, which he keeps in the drawer with his polishes and 100 percent horsehair brushes.

“I’ve forgotten some of the people, but they still get prayed for every day,” he said.

He has shined the shoes of Rob Lowe, Nicolas Cage, Julius Erving, Barry Sanders, Franco Harris, Dan Akroyd, Patti LaBelle as well as of Oblate Father Tony Rigoli, pastor of Our Lady of Guadalupe Church, where he attends Mass with his wife, Theone.

When Kendrick lost his mother in 2015 — Doris Kendrick was the lead candy maker at Evans Creole Candy Factory in the French Quarter, and Kendrick had changed her tracheostomy tube every day — he knew the funeral home would be packed.

Kendrick held his grief in check in the days leading to the funeral, but on the day of the services, he finally had to go outside as his mother’s coffin was closed. Like the woman in the airport years earlier, he was inconsolable. He bent down to his knees on the sidewalk in front of the funeral home.

“I have this picture in my head, and I wish I had this physical picture,” Kendrick said. “My wife is over me, my kids are around me, and I’m crying. And when I raised my head, I saw Jerry, the guy that fixes the elevator at the airport; I saw Nick the cook; I saw Eric from aviation; I saw Mike Geason, the sky cap; I saw Dave Schulingkamp, my friend from the French Quarter who’s a regular; I saw Dave Tibbetts, who was the fire chief of the airport.

“All these people are standing next to me, and my wife says, ‘Look at your other family, Wayne.’ That’s a picture I will never forget. And, it all came from the shoeshine stand.”