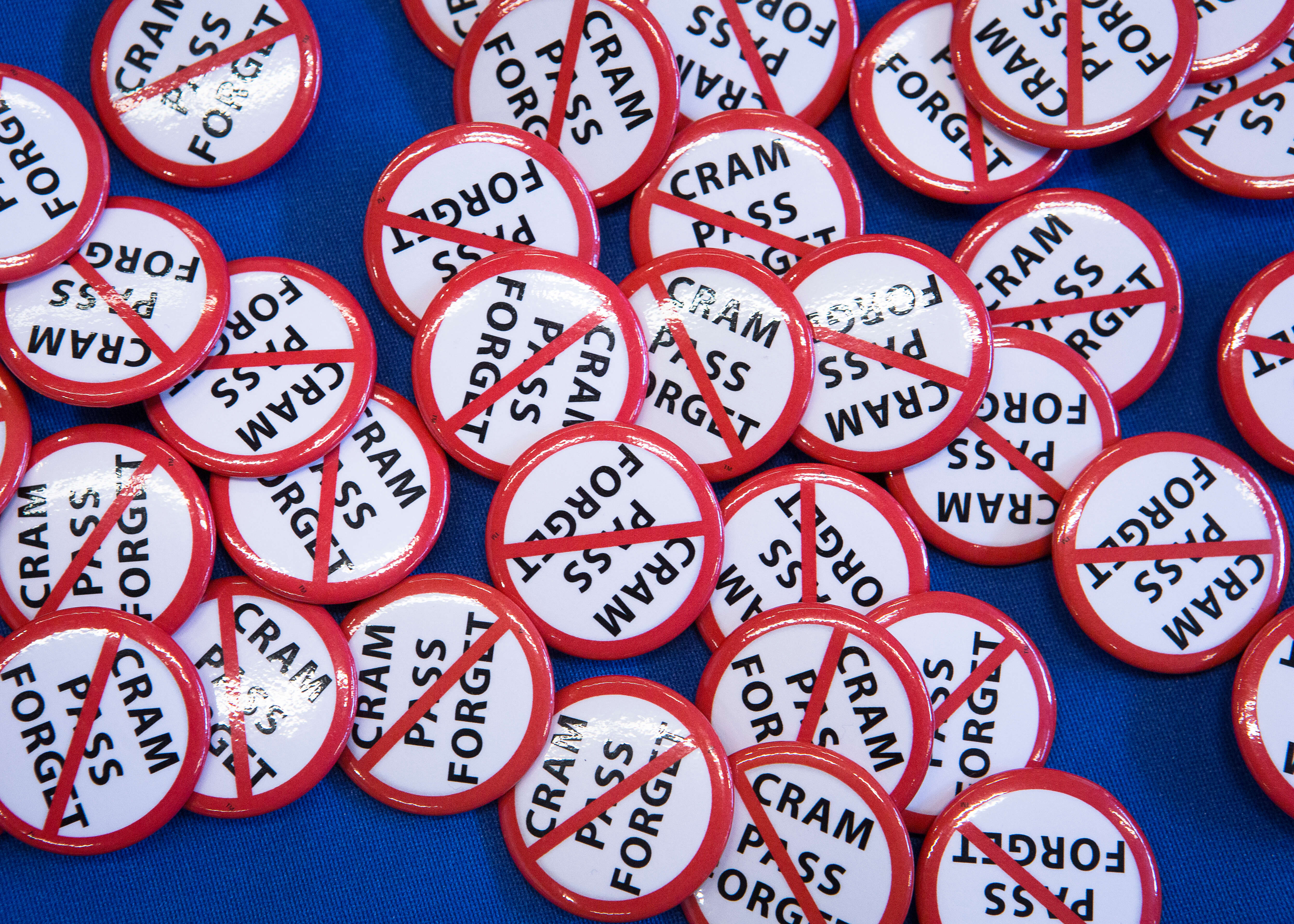 Photo Credit: CNS/Tyler Orsburn - Pins that read no more "Cram, Pass, Forget" are seen on a vendor's table July 22 during the national conference of the Institute for Catholic Liberal Education held July 22-25 at The Catholic University of America in Washington, D.C.

A sea of both experienced Catholic liberal teachers and neophytes eager to learn about the educational philosophy gathered at The Catholic University of America in Washington, D.C., July 22-25.

The bones of a modern movement to restore traditional Catholic liberal education, these culture fighters hope to change society through education.

Elisabeth Sullivan, executive director of the Institute for Catholic Liberal Education, began the institute’s four-day conference by introducing the fundamental ideas behind a Catholic liberal education and the modern obstacles seen as derailing 2,500 years of educational tradition.

“This renewal of authentic Catholic education it is fully ordered toward eternal happiness, toward the child’s future,” Sullivan said July 22. “It restores the meaning and purpose that has been stripped from modern education. It is the formation of the whole person.”

Sullivan explained a liberally educated person is free not to do whatever he wants, but free from ignorance. With an education that develops critical thinking and encourages wonder, a person can govern himself with wisdom and virtue.

“It is fundamentally to be fully human,” Sullivan said.

Sullivan said that because students see and live this connection, their intellectual being develops alongside and intertwined with their spiritual being.

John Turrentine, a history and English teacher at St. Augustine’s Academy in California, returned this year for his third conference organized by the Institute for Catholic Liberal Education. He affirmed Sullivan’s message.

“As you progress in this style of education, you are growing closer to our Lord, and by necessity, the closer you get to our Lord, the more kids see that,” Turrentine said. “You are living your Catholic faith, your students see that, see that it’s beautiful, and they want to have it too. That’s the first thing: You follow this path, you are getting closer to Christ.”

Meanwhile, Sullivan said that modern education, which began at the dawn of the 20th century with John Dewey’s reforms, is the antithesis of unity. If there is no objective truth, learning becomes fragmented, meaningless and purposeless.

Sullivan was adamant that a Catholic liberal education is neither too demanding for young children, nor elitist. Rather, its pedagogy proceeds according to a child’s natural development.

“We begin to know through our senses, we observe through the natural world, and that eventually leads us up this ladder to more complex truths, ethics, and political sciences.”

For that reason, the liberal Catholic tradition calls for kindergartners and first- and second-graders to begin their studies observationally. For example, science ought to start with going outside and cataloging bugs and rocks and leaves, things 6-year-olds can see and remember. Instead, Next Generation Science Standards requires first-graders to study molecules, waves, energy and motion.

Sullivan defended the didactic system with evidence, first citing the 2,500 years of tradition that carried it to the beginning of the 20th century, and then citing current case studies that prove its effectiveness.

One school, Our Lady of Lourdes in Denver, stood on the brink of closure eight years ago, down to a dwindling 90 students. Upon introducing a Catholic liberal pedagogy and methodology, enrollment increased, and the school eventually opened up a second campus to accommodate the inundation of students who wanted to study under this “new” system.

The pastor at Holy Innocents in California tentatively adopted a Catholic liberal pedagogy when no amount of skills and test-based teaching had made any impact on his students. Within the first quarter after adopting the methodology, the school witnessed a 50 percent jump in student growth.

Sullivan said that Catholic liberal teaching catalyzed both of these rebounds because it engaged students, forcing them to question and discover why the things they learn are meaningful.

“Perhaps most importantly, we are seeing unparalleled faith formation in these schools,” Sullivan said. “Why? Because the faith is integrated in all learning … and that’s what has been missing.”