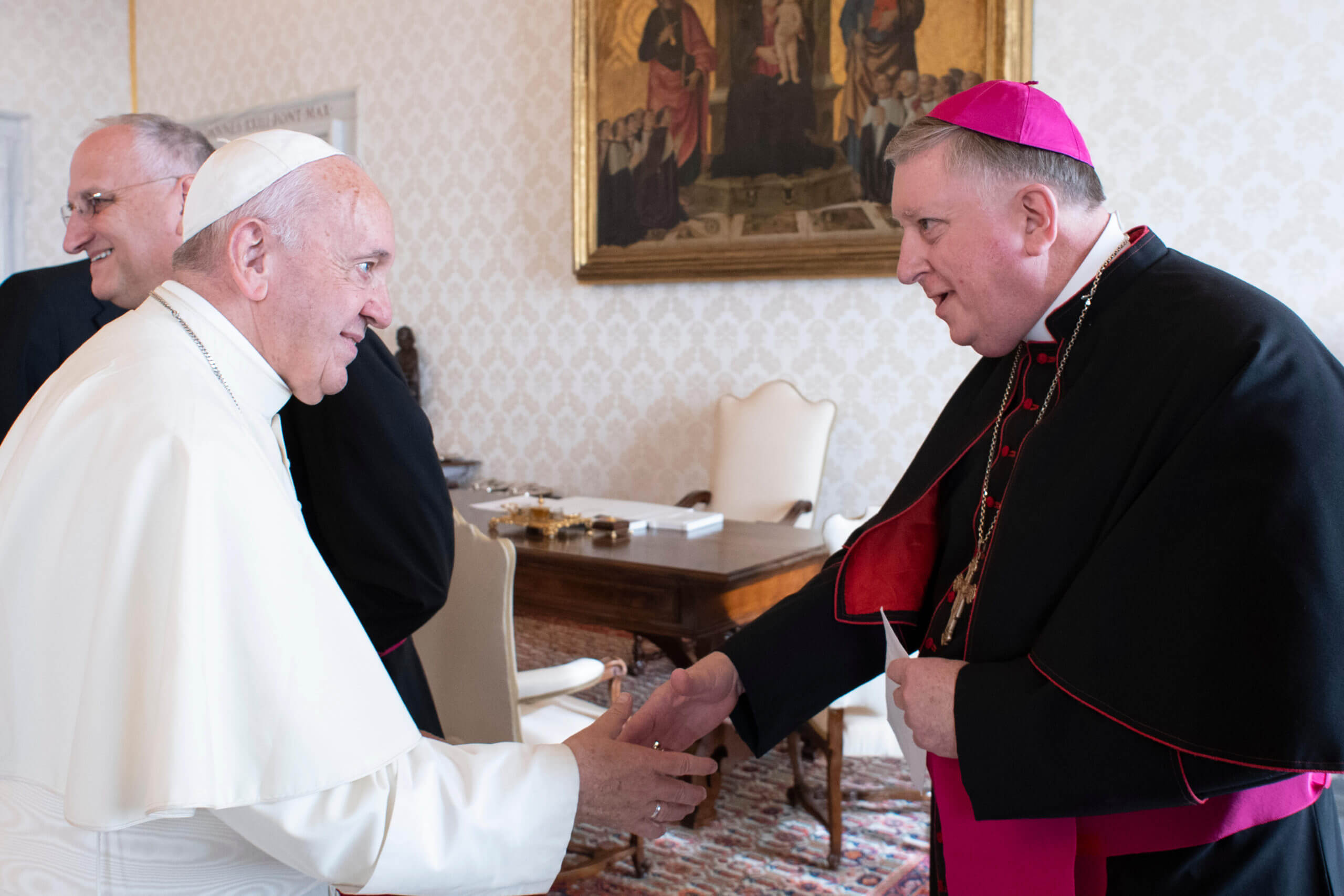 Bishop Mitchell T. Rozanski traveled from Springfield to the St. Louis Archdiocese as its newly named archbishop with this advice from his mother, Jean: “Don’t get a big head.”

Bishop Rozanski shared this anecdote during a morning news conference June 10 at the Cathedral Basilica of St. Louis.

Earlier that morning, it was announced Pope Francis had accepted the resignation of Archbishop Robert J. Carlson, who has led the St. Louis Archdiocese since 2009, and named Bishop Rozanski, 61, as his successor. On June 30, 2019, Archbishop Carlson turned 75, the age at which canon law requires bishops to turn in their resignation to the pope.

For Archbishop Rozanski, who will be installed Aug. 25, this appointment will move him from one of the smaller dioceses in the United States to one of the larger achdioceses with some 505,000 Catholics worshipping in 182 parishes.

Geographically, the archdiocese comprises St. Louis and 10 western Missouri counties, covering an area in excess of 5,900 square miles, roughly twice the size of the Springfield Diocese.

In a letter emailed to diocesan clergy, religious, and staff, Archbishop Rozanski said it was a “privilege to serve” as bishop of Springfield.

“Please know of my great esteem for you, especially evident in our parishes, schools and so many services that reach out to the poor, the underprivileged, and the preborn and youth, that make the Gospel truly present where it is needed the most,” he wrote in his letter.

The prelate was appointed as the ninth bishop of Springfield June 19, 2014, coming to western Massachusetts from his home, the Archdiocese of Baltimore, where he was raised and attended Catholic schools. He was ordained a priest for Baltimore Nov. 24, 1984. He named a Baltimore auxiliary bishop in 2004 by St. John Paul II.

Until he is formally installed in St. Louis, Archbishop Rozanski will serve as apostolic administrator of the Springfield Diocese.

In June 2014, retiring Springfield Bishop Timothy A. McDonnell introduced his successor to the diocese with the words, “You’re gonna love him.” On June 10, he offered praise and congratulations for the newly named archbishop.

“It was just six years ago this month that, as in the Archdiocese of St. Louis today, the announcement of a new bishop was made here in the Springfield Diocese. That new bishop was Mitchell Rozanski,” Bishop McDonnell said in a written statement. “Over the past six years, Bishop Rozanski has been for the Diocese of Springfield a shepherd, a priest, a pastor, a father and a friend.

“We’ve come to know his compassion in times of sadness, his strength in situations of challenge, and the constancy of his caring and generous heart. He has been for us a man of God and a people person. He is family.

He added: “St. Louis’ gain is our loss. But we are better off for having had his presence the past six years. We thank him. We shall miss him. May God bless Archbishop Rozanski in his new endeavor, and may God bless all of us in the Diocese of Springfield. Let us pray for Bishop Mitch and for each other.”

At the news conference in St. Louis, Archbishop Carlson told an audience of staff, clergy and reporters: “You are receiving from the Holy Father a true man of God. Pope Francis is appointing someone who knows the joy of the Gospel. He has a zeal for evangelization and is known throughout the Northeast, from Baltimore to Boston, for his work with peoples of all colors, all creeds.”

Noting that Archbishop Rozanski has managed the church in a big city, as well as served as a parish pastor, Archbishop Carlson said, “To my mind, he is exactly what we need.”

Addressing his successor, he described the Catholics in the St. Louis Archdiocese as “amazingly friendly,” generous and possessing “a deep love for the Lord.”

In his remarks at the news conference, Archbishop Rozanski said he was very surprised to receive the news two weeks ago of his new appointment. He offered thanks to Pope Francis “for the trust he has placed in me” and to Archbishop Carlson, saying, “I will count on his wise counsel and wisdom.”

Citing the current crises of the pandemic and the “specter of racism” in the U.S., Archbishop Rozanski said, “Jesus has entrusted to us his Church, to be His presence in our world.” He said he would work together with the laypeople, religious and clergy of the archdiocese to bring the healing presence of God that is needed at this time.

The archbishop also thanked the people of the Springfield Diocese for their welcome and collaboration over the last six years. “They are in my prayers,” he said. “Goodbyes are never easy, but we remain close in faith.”

Following the two prelates’ remarks, Archbishop Rozanski answered reporters’ questions, which dealt with inclusivity, clergy abuse and declining numbers of parishioners in the St. Louis Archdiocese. He said getting to know each other as people, sharing the faith joyfully and increasing transparency regarding abuse claims would be priorities for him.

On a personal level, when asked how he would describe himself, he responded, “The happiest day of my life was the day of my ordination as a priest. And the happiest years of my life were when I served in parishes. … I am a parish priest.”

Asked how his family members, including his parents, Alfred and Jean, and his brothers, Kenneth and Albert, responded to his elevation to archbishop, he shared his mother’s comment: “I told you this when you were named an auxiliary bishop, and I told you this when you were installed as bishop of Springfield and I am telling you this again: Don’t get a big head. Always be humble.”