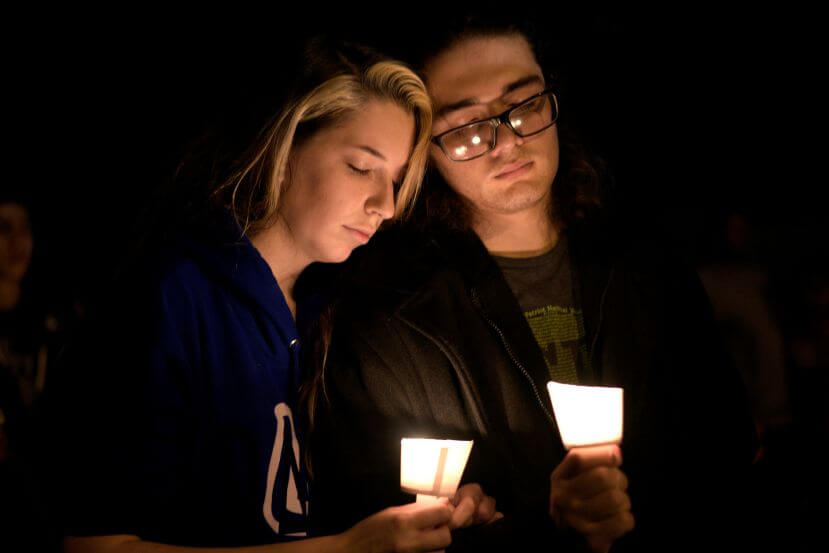 Photo Credit: CNS photo/Sergio Flores, Reuters - A man and woman attend a candlelight vigil after a mass shooting Nov. 5 at the First Baptist Church in Sutherland Springs, Texas. A lone gunman entered the church during Sunday services taking the lives of at least 26 people and injuring several more.

My brothers and sisters, once more we stand on the fortunate periphery in absolute horror as another mass shooting occurs in our country. I say, “fortunate periphery” because this could happen here in Vermont some day. We are fortunate it has not. Last month a mass shooting happened in Las Vegas, where 59 were killed and 441 were wounded.  Yesterday, it happened during a church service, on a Sunday morning, in rural Texas. Twenty-six people are dead, 20 are wounded. The victims ranged in age from 5 to 72, and among the dead were several children, a pregnant woman and the pastor’s 14-year-old daughter. The numbers and the details are staggering.

I find my horror at the actions of these murders is mixed with frustration and guilt: frustration that we as a country cannot seem to come together to do anything about this evil plague and guilt that I bear for being part of a culture that fosters such violence. I find myself praying in the words of the song, “Be merciful, O Lord, for we have sinned.”

I invite all of us to prayer and contrition. First, prayers for our brothers and sisters who were murdered at the First Baptist Church in Sutherland Springs, Texas, prayers for those who are recovering from their wounds, and prayers for the families and friends who have lost loved ones and are caring for the wounded.

But also prayers for ourselves that we may as a country somehow find a way to have a meaningful dialogue about what is to be done to stop these mass shootings, with an openness to hear each other and to seriously consider new policies and laws to protect people from this horror. Each of us must search our own heart and ask, “Lord, what must I do?”

Finally, I ask my fellow Catholics to join me in prayer and fasting out of contrition for the collective guilt we bear for the violence that is so pervasive in our society.  May we ask the Lord to be merciful on all of us and to help us find our way more deeply into Him who is “the way, the truth, and the light.”