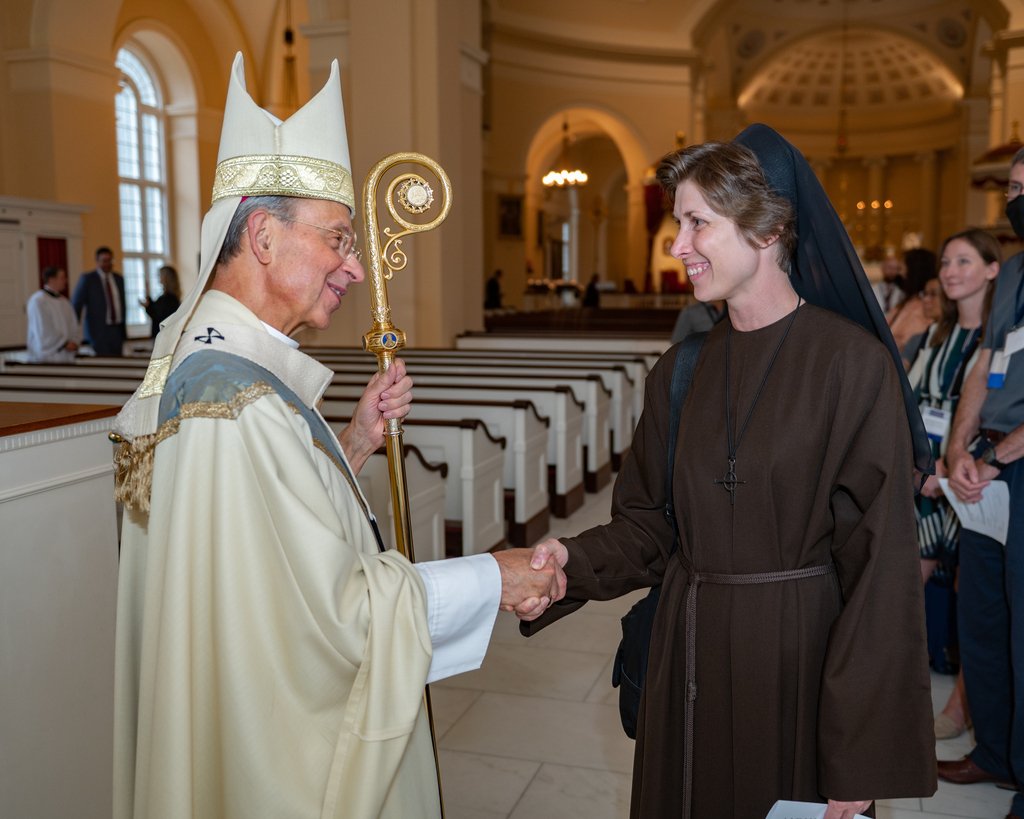 Photo Credit: CNS/Kevin J. Parks, Catholic Review - Baltimore Archbishop William Lori, chairman of the U.S. Conference of Catholic Bishops' Committee on Pro-Life Activities, greets Sister Amaris Salata, a Franciscan Sister of the Eucharist, who is assistant program coordinator for respect life ministry in the Archdiocese of Hartford, Connecticut, following Mass July 18 at the Basilica of the National Shrine of the Assumption of the Blessed Virgin Mary in Baltimore. The Mass was part of the USCCB's 2022 Diocesan Pro-Life Leadership Conference.

That number represented about half the views the page had garnered in the entire previous two years combined, according to Kathleen Wilson, pro-life coordinator for the archdiocese.

“We know the interest is out there,” said Wilson, noting the Archdiocese also fielded more than 50 calls from individuals looking for information on how to support the “Walking with Moms in Need” outreach, an initiative of the U.S. bishops to connect pregnant women and their families with parishes and to a growing network of resources.

“People want to know how they can be a part of redoubling our efforts to help,” Wilson said. “We have probably more than 80 parishes actively trying to increase the resources.”

Wilson was among approximately 50 pro-life leaders who gathered in Baltimore July 18-20 for the U.S. Conference of Catholic Bishops’ Diocesan Pro-Life Leadership Conference, livestreamed for remote participants.

The conference included a special Mass at the Basilica of the National Shrine of the Assumption of the Blessed Virgin Mary in Baltimore as well as discussion sessions at a conference center.

Supporting women in choosing life was a constant theme for many participants interviewed by the Catholic Review, Baltimore’s archdiocesan news outlet.

Erin Younkins, director of the Office of Life, Justice and Peace in the Archdiocese of Baltimore’s Institute for Evangelization, said there are now about 60 parishes involved in “Walking with Moms in Need” in the Baltimore Archdiocese — up from 45 at the end of 2021.

“People really want to get in and actually meet the women, which is exactly what ‘Walking with Moms in Need’ is supposed to be,” Younkins explained.

“It’s not supposed to be just a way to raise money or kind of dole out some goods,” she continued, “but to actually make relationships with women and provide a community for them so they don’t feel pressured into abortion.”

Since Maryland has some of the most permissive abortion laws in the country, it is expected to become a magnet for women seeking abortions from other states that have outlawed the procedure in the wake of the Dobbs v. Jackson Women’s Health Organization ruling that overturned Roe.

Younkins said pro-life pregnancy resource centers in Maryland have been working “full throttle” in preparation for the possible influx.

She also said state lawmakers need to pass legislation to track abortion statistics in Maryland, which is among a handful of states that do not report abortion data to the Centers for Disease Control and Prevention.

Sister Amaris Salata, a Franciscan Sister of the Eucharist, who is assistant program coordinator for respect life ministry in the Archdiocese of Hartford, Connecticut, said the end of Roe gives hope to pro-life supporters in states such as Connecticut, where liberal laws on abortion remain in effect.

“It gives us cause for hope that things can happen,” said Sister Salata, noting that her office heavily promotes the 40 Days for Life campaign and supported Connecticut’s first March for Life, held in Hartford in April. It drew 3,000 people and “we are hoping to build on that,” she added.

A major part of pro-life ministry involves helping women and men suffering from the effects of abortion, Sister Salata said.

“The strength of the Church is that it is designed to meet people where there is a need for healing,” she said. “The hope is to meet the people before they go through (abortion), but even after, for them to be able to know that the church is that place that offers the healing and mercy we all need.”

In a July 18 keynote address to the conference, Baltimore Archbishop William Lori said the Dobbs decision represents a “new moment” for the pro-life movement.

According to a written text of the address provided by the archbishop’s office, Archbishop Lori connected the Church’s pro-life advocacy with the U.S. bishops’ recently launched National Eucharistic Revival, a three-year effort to renew Catholic understanding and love of the Eucharist.

“The high court’s recognition that there is no constitutional right to an abortion signals not an end, but a new beginning of our ongoing efforts to build a culture of life,” Archbishop Lori said.

The archbishop, chairman of the U.S. bishops’ Committee on Pro-Life Activities, said now is the moment to “embrace the eucharistic foundation for building a culture of life in these United States.”

“If we are to build a culture of life — first to wean our society away from seeing death as a solution to its problems and then to build a society that truly respects all human life and every person from the moment of conception until natural death – if we are to build that kind of a culture, then we must pay closer attention to our own backyard,” Archbishop Lori said, referencing the need to raise awareness about the church’s pro-life teachings among Catholics.

“While not leaving the public square, for we must always advocate for life, we need to focus on the many Catholics who are conflicted about the Church’s teachings on human life and sexuality,” he said.

Polls show that “conflicted Catholics” are more likely to accept the Church’s teaching on life when they understand the Church’s care and concern for both mother and child, Archbishop Lori said, “and especially when they are invited to help women facing difficult pregnancies.”

Archbishop Lori said he is sure pro-life leaders know many in the movement “whose living encounter with Jesus in the Eucharist makes them beautiful and convincing witnesses to the inviolable dignity of every human life — those whose witness is marked by truth, love, mercy and compassion.”

“All things to the contrary — anger, backbiting, character assassination — all such things do great harm to our witness to life and are contrary to Eucharistic love,” he said.

Being true to the Eucharistic foundations of the culture of life means “engaging in the works of mercy, both corporal and spiritual, with a loving heart, a long-suffering heart, a patient heart, even when our love is neither returned nor requited,” Archbishop Lori said.