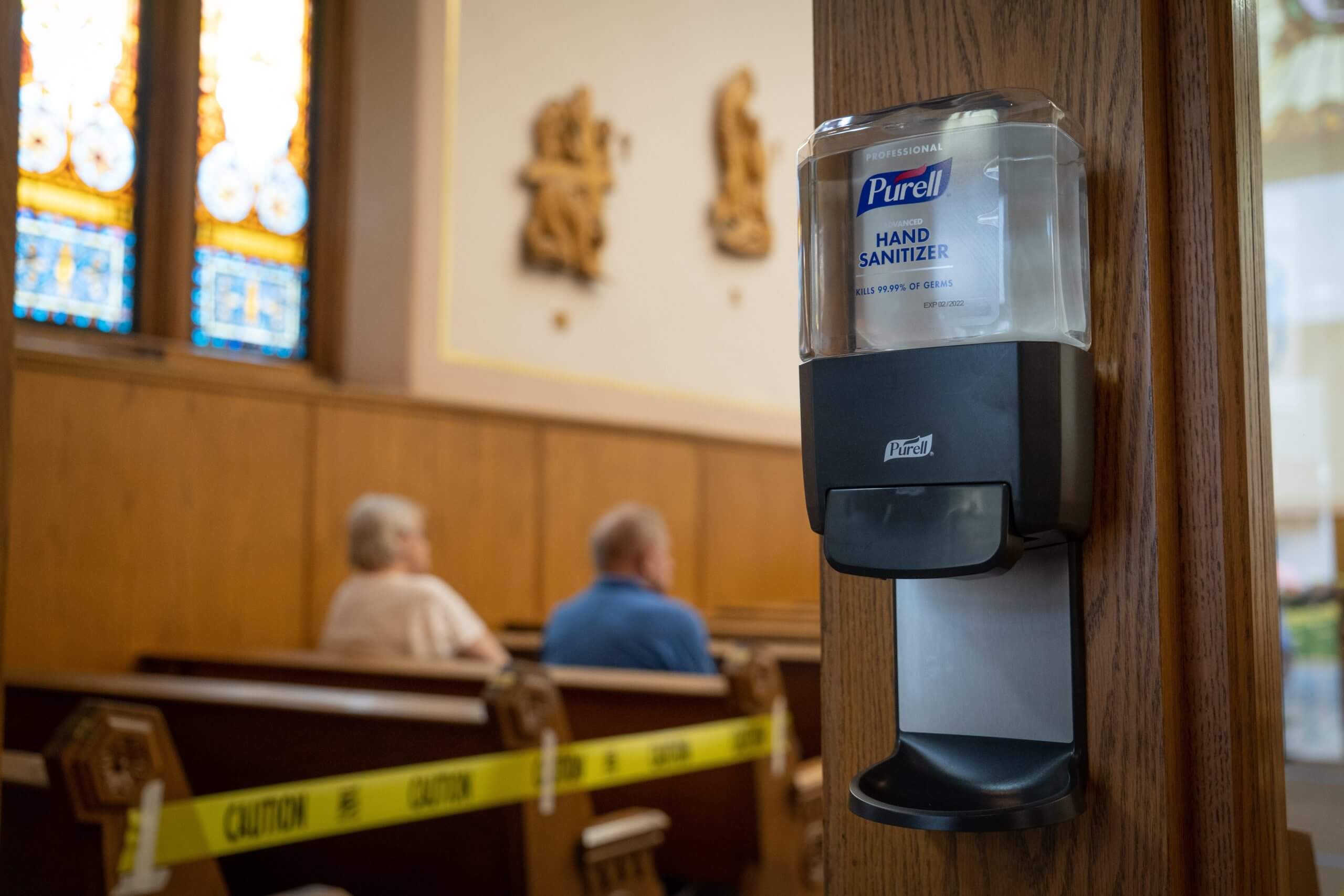 Photo Credit: CNS/Katie Rutter - A hand-sanitizing station is seen at the entrance to the sanctuary of St. Louis Church in Batesville, Indiana, as safety protocols, including social distancing, are observed to minimize the spread of the coronavirus.

Americans overwhelmingly back pandemic-related restrictions on worship services, saying houses of worship should not be exempt.

Americans, by a 4-to-1 margin, said houses of worship should be subject to the same social-distancing rules as other organizations. The ratio backing this view was 3-to-1 for Christians, 4-to-1 for Jews and 9-to-1 for those who are religiously unaffiliated.

The results were issued Aug. 7 by the Pew Research Center in a new report, “Americans Oppose Religious Exemptions From Coronavirus-Related Restrictions.”

Among adults who go to church regularly, 55% said their congregation’s place of worship is open with modifications, 31% said it is closed, and 6% said it is open as normal prior to the COVID-19 outbreak. Asked what restrictions are in place, 45% said their house of worship required social distancing, 36% restricted attendance, 35% required masks and 20% limited communal singing.

Of those who have been watching religious services online, 19% said they will continue to watch online after the pandemic, while 28% said they’ll watch less often after the outbreak subsides, while 53% said their viewing habits will stay the same.

The Pew report said online watchers report great levels of satisfaction, with 91% saying they are at least somewhat satisfied by what they’ve seen. Forty percent reported they watch services from their own house of worship, while 29% said they’ve watched some other congregation’s worship services, with the rest saying they’ve watched both.

Among those watching or attending services, 76% said they’ve heard from the pulpit about the importance of taking steps to limit COVID-19’s spread — far outstripping other subjects such as support for Black Lives Matter protests (41%); the importance of voting, protesting or being politically engaged (40%); and opposition to abortion (35%). Opposition to government orders that stopped churches from holding in-person religious services was a topic heard by 31% of survey respondents, while 25% said they’d heard opposition to Black Lives Matter protests in a sermon, and 11% said they’d heard support for legal abortion.

Eight percent of U.S adults who go to church at least monthly said their congregation’s status is too relaxed, while 21% said it is too restrictive.

To help cope with the coronavirus outbreak, 66% of Catholics said they prayed at least weekly. Activities done more frequently than prayer included watching TV or movies, spending time outdoors, or talking on the phone or via video with friends or family.