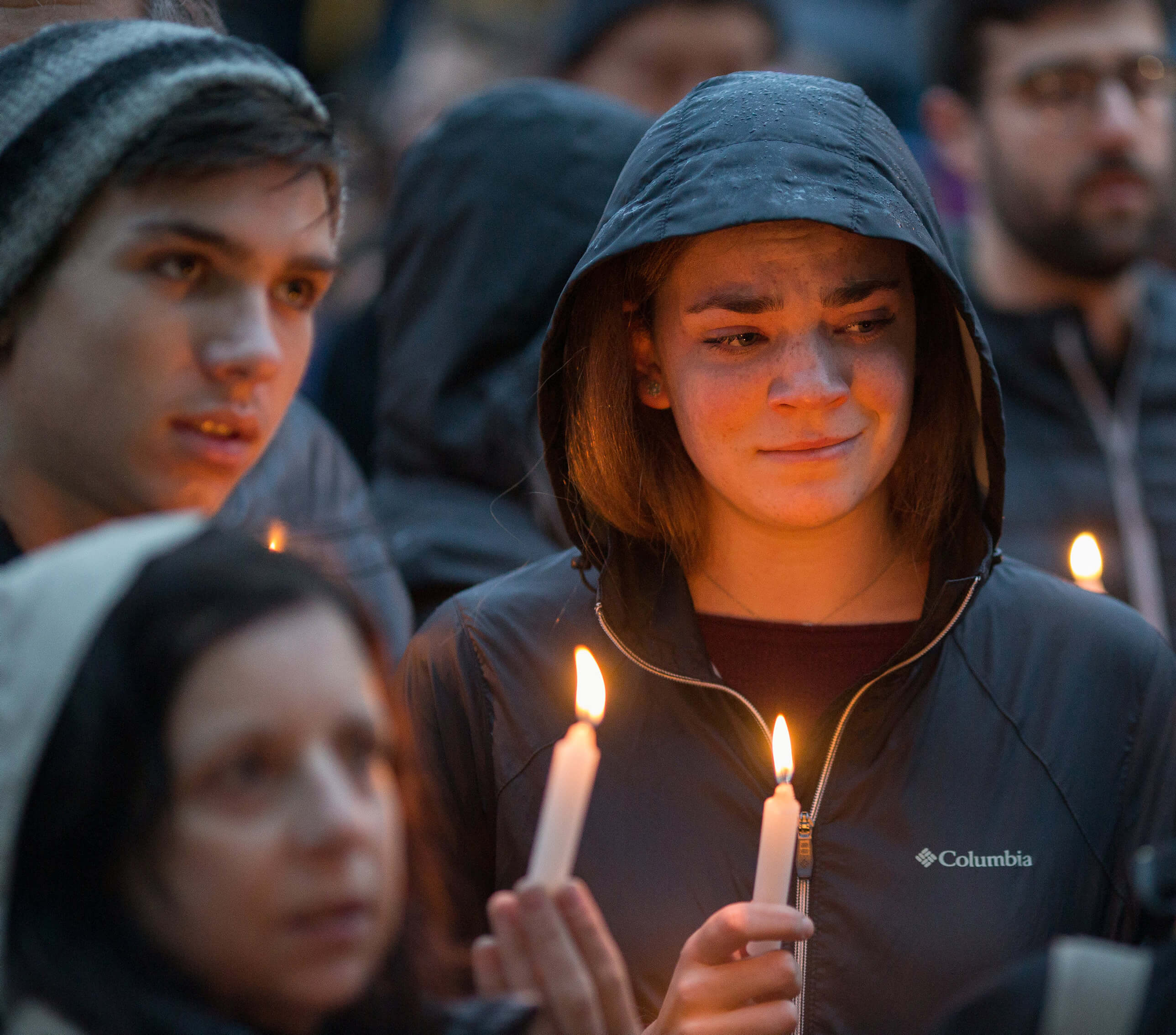 Photo Credit: CNS/John Altdorfer, Reuters - People mourn during a candlelight vigil Oct. 27 for victims of the shooting that killed eleven people at the Tree of Life Synagogue in Pittsburgh. Robert Bowers opened fire that morning during a service at the synagogue, also wounding at least six others, including four police officers, authorities said.

The U.S. Catholic bishops stand with “our brothers and sisters of the Jewish community,” the president of the U.S. Conference of Catholic Bishops said Oct. 27 after a horrific shooting earlier that day in Pittsburgh at the Tree of Life Synagogue, described as a hub of Jewish life in that city.

The shooting occurred during a morning baby-naming ceremony, for which an estimated crowd of 45 to 100 people had gathered, according to news reports. There were 11 fatalities, all adults. Six others were injured, including four members of law enforcement.

“We condemn all acts of violence and hate and yet again, call on our nation and public officials to confront the plague of gun violence,” said Cardinal Daniel N. DiNardo of Galveston-Houston.

“Violence as a response to political, racial or religious differences must be confronted with all possible effort. God asks nothing less of us,” he said. “He begs us back to our common humanity as his sons and daughters.”

At the Vatican Oct. 28, Pope Francis prayed for those affected by the deadly attack, calling it an “inhumane act of violence.” “May the Lord help us extinguish the fires of hatred that develop in our society,” the pope prayed after reciting the Angelus prayer.

The gunman, later identified as a 46-year-old Pittsburgh man named Robert Bowers, allegedly shouted that “all Jews must die” as he stormed the synagogue in the Squirrel Hill section of the city. Once inside he began shooting. Police said he was armed with three handguns and an AR-15 “style” weapon. He is believed to have acted alone.

In Pittsburgh, Special Agent Robert Jones, who heads the FBI’s field office there, said Oct. 28 that Bowers was formally taken into federal custody the previous night. He has been charged with 29 separate federal crimes, including hate crimes and weapons offenses. Jones said 22 of the counts are “punishable by death.”

“We will spare no effort or resource to make sure the defendant is held fully accountable for his unspeakable crimes,” Jones said at an early morning news conference.

Bowers was apprehended by local law enforcement after exchanging gunfire with police outside the synagogue, following his shooting spree inside.

He was hospitalized for injuries he sustained, which required surgery, according to Jones. He said Bowers remained in the hospital in fair condition and was under guard. The alleged shooter was expected to go before a federal magistrate the afternoon of Oct. 29.

Reuters reported that a post on social media later identified as coming from Bowers said: “I can’t sit by and watch my people get slaughtered. Screw your optics, I’m going in.” Shortly before the shooting it had been posted on Gab, a Philadelphia-based social networking service described as an alternative to Twitter. In a statement, Gab.com confirmed the poster’s profile belonged to Bowers.

In his statement, Cardinal DiNardo, who was ordained as a priest for the Diocese of Pittsburgh, said: “I commend to our Lord the victims, including first responders, and the consolation of their families. May Almighty God be with them and bring them comfort at this tragic time.”