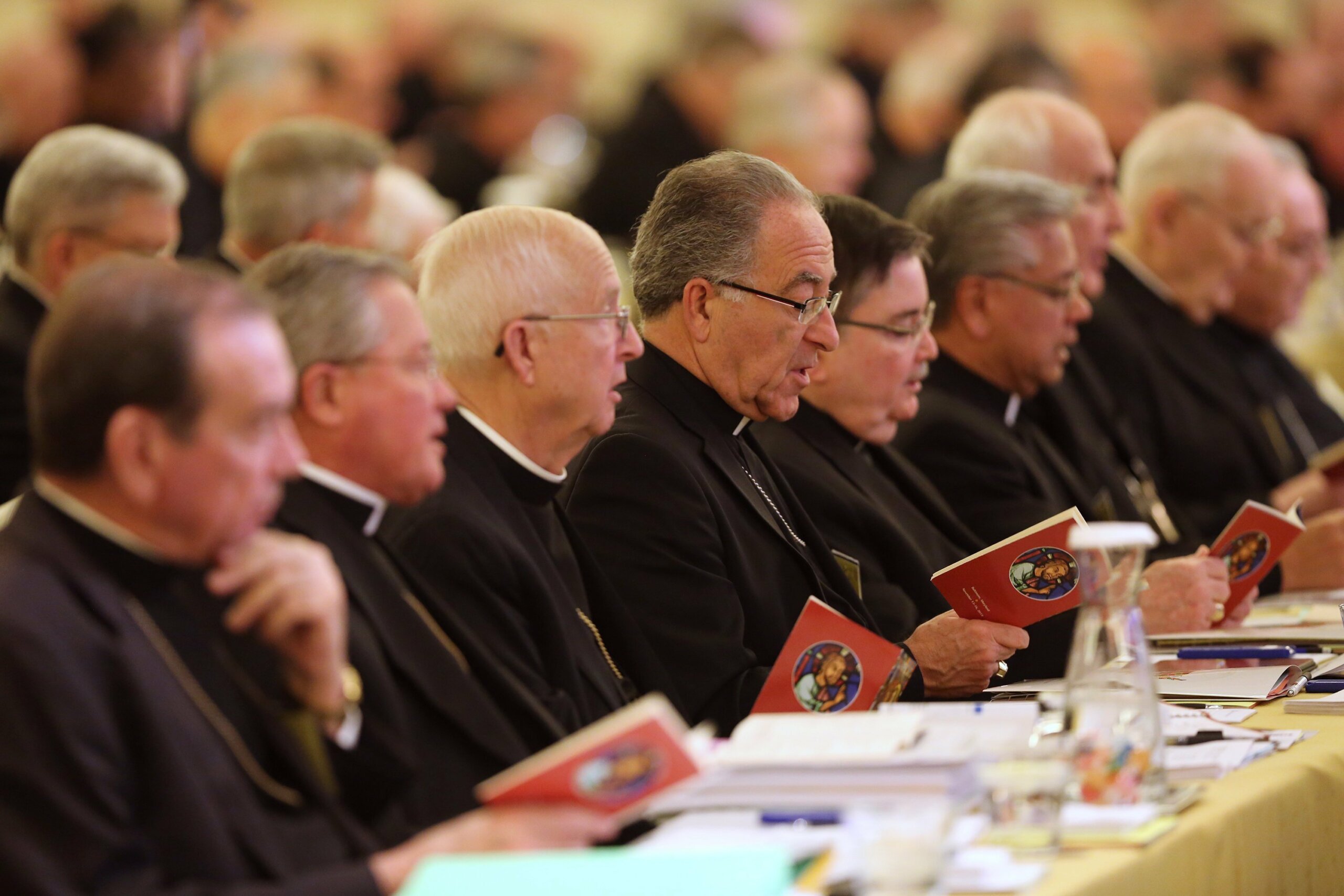 Photo Credit: CNS/Bob Roller - Bishops pray during the 2017 fall general assembly of the U.S. Conference of Catholic Bishops in Baltimore. For 2022, instead of the traditional classroom-style seating in parallel rows, the format for the bishops' meeting Nov. 14-17 was changed to feature round tables in which the bishops can see each other and more easily see the room and who is speaking.

The U.S. bishops have had their November plenary session in Baltimore for many years, but this year there will be some furniture moves and some schedule changes.

Out are the classroom-style seating, news conferences and the bishops being talked to for hours on end.

In will be a greater emphasis on prayer, “fraternal dialogue” and less formal bishop-media encounters.

That’s the word from James Rogers, chief communications officer for the U.S. Conference of Catholic Bishops, who explained to Catholic News Service some of the changes and why they were taking place.

As in 2021, this year’s meeting will begin with prayer, followed by Mass at the Basilica of the National Shrine of the Assumption of the Blessed Virgin Mary in Baltimore. The afternoon will include regional meetings and an executive session. In a new addition, each day of the meeting will end with vespers.

Throughout the plenary there will also be 24-hour eucharistic adoration, which was instituted at the 2021 meeting.

Rogers said this emphasis on prayer and reflection was “absolutely” inspired by Pope Francis, who had encouraged the bishops to make a retreat together in January 2019 meeting at Mundelein Seminary following the revelations concerning former Cardinal Theodore E. McCarrick.

“Bishop after bishop after leaving Mundelein said, ‘We need to do something like this more often.’ I do think that was a powerful experience for them,” Rogers said.

Regional meetings are standard fare for the plenaries, but this year’s meeting also will include a time for “fraternal dialogues.” While the bishops have contact year after year with other bishops in their geographic regions, the fraternal dialogues will be randomized, helping to “broaden their sense of community,” Rogers said.

“The opportunity for bishops to connect with one another is fairly rare and fairly precious,” he said. “It’s really about bishops, their ministry and how they can strengthen and support each other in their ministry.”

“That is the focus” of these changes, Rogers said.

Once the general, or public, session starts, attendees will see one other change. Instead of the traditional classroom-style seating in parallel rows, the format will include round tables in which the bishops can see each other and more easily see the room and who is speaking.

“The orientation will not just be toward the dais but oriented toward their brother bishops,” Rogers said. He called the structure an experiment, and organizers will be looking for feedback from the bishops on the change.

One final, and perhaps controversial, change will be at least a temporary end to news conferences. Rogers denied claims by some that this means less transparency on the part of the bishops.

The USCCB Office of Public Affairs asked, “how can the physical space better encourage dialogue and encounter,” Rogers said.

Traditionally, bishops are on a raised stage speaking to reporters arrayed before them. This year there will be smaller seating arrangements with three or four reporters meeting with a bishop, creating more of a conversation than what can seem an interrogation.

Media access to bishops will remain, he promised. The Office of Public Affairs will continue to facilitate one-on-one interviews, he said, and it will publicly schedule the smaller encounters. As usual, the entire public session, including votes for new officers and committee chairs, will be livestreamed.

Rogers described the changes in media access also as an “experiment” and said he will be looking for feedback both from the bishops and from reporters when the meeting is over.