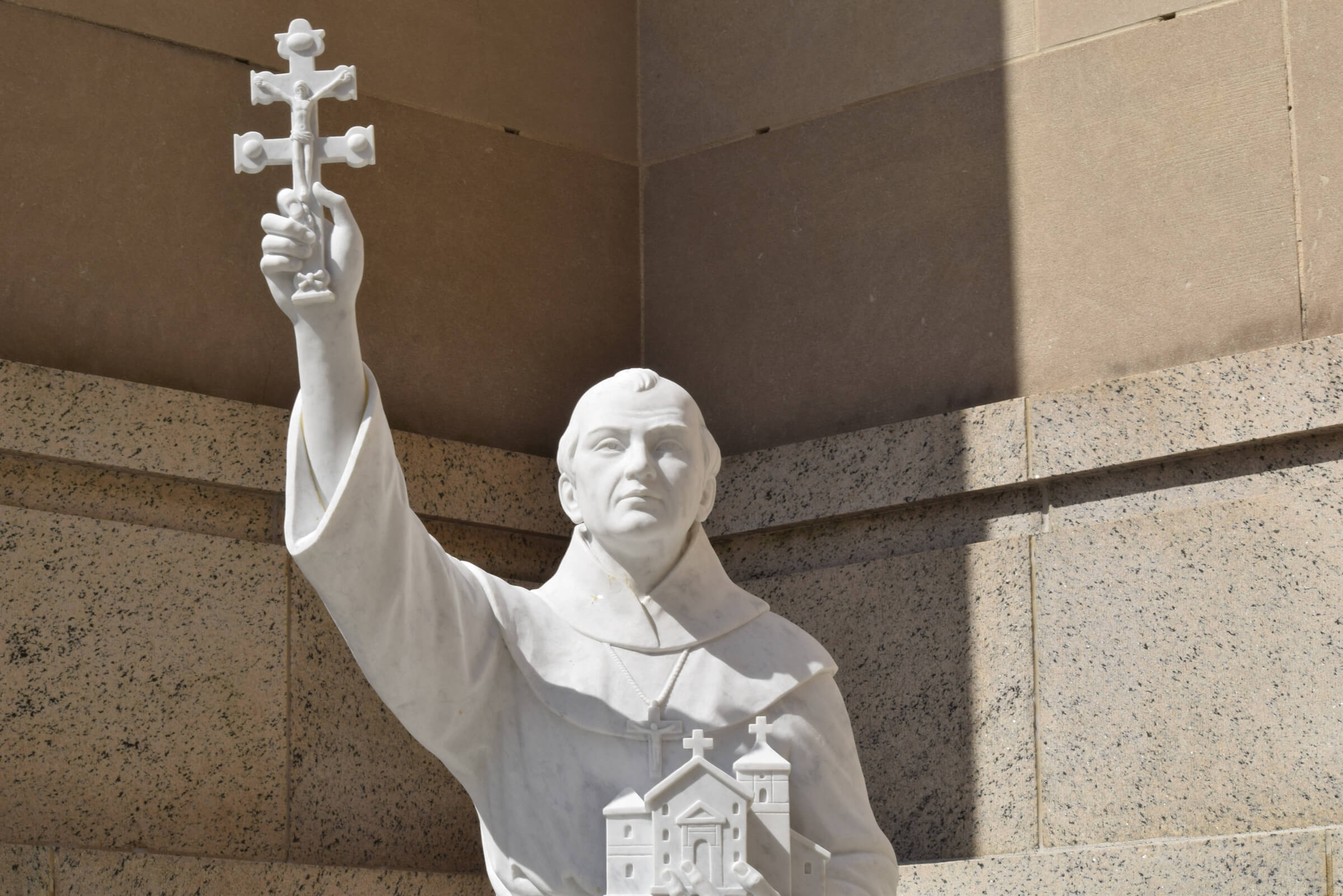 Photo Credit: CNS/Elizabeth Bachmann - A statue of St. Junipero Serra is nestled in an alcove on the eastern side of the Basilica of the National Shrine of the Immaculate Conception in Washington, D.C.

Washington a city of religious sites, not just monuments to government

Tourists visit D.C. to see the Capitol, the White House, the Washington Memorial and other historical sites. However, the nation’s capital also is home to a plethora of Catholic sites, symbols and memorials interwoven with the history and politics of the country, that even D.C. natives might not be familiar with.

Known affectionately as “Little Rome,” it is hard to turn around in the neighborhood of Brookland without running into some kind of Catholic monument or symbolism. Home to The Catholic University of America, the Basilica of the National Shrine of the Immaculate Conception, the St. John Paul II National Shrine, the John Paul II Institute, the Franciscan Monastery of the Holy Land in America and the Dominican House of Studies, just to name a few, it is no wonder the neighborhood attracts Catholic sightseers in droves.

The basilica, with its soaring mosaic ceilings and Gothic-feeling catacombs, is the jewel of “Little Rome.” However, most tourists miss an unassuming little white statue on the east side of the national shrine.

This little marble man, St. Junipero Serra, was erected in September 2015, when Pope Francis celebrated a Mass at the basilica to canonize Junipero.

St. Junipero was not born in America, but he eventually traveled here, helping to bring Christianity to the West Coast and modern-day California. Junipero Serra left his home on the island of Majorca, Spain, in 1728 when he felt called to the priesthood. The Franciscan friar first traveled to Mexico, and eventually to California, where he established 10 missions. He both worked to evangelize the region’s Native Americans and protested against the Spanish soldiers’ harsh treatment of them, though some argue he was harsh in his own evangelization of the native people.

This statue is a scale replica of one in the Capitol’s Statuary Hall. In it, St. Junipero holds a cross in one hand and a church in the other. These figures symbolize his goal to evangelize people who had never heard of Jesus Christ.

Archbishop Sheen first attended the university as a student, then returned to teach. During his 23 years as a professor, Archbishop Sheen developed a larger and larger following, he began broadcasting on television and radio, maintained a full teaching load, and wrote 34 books.

He was one of the most influential Catholic “personalities.” Known across the country, Protestants and Catholics alike gathered first around the radio to hear his Sunday evening Lenten broadcasts, and later around the TV to watch his show “Life Is Worth Living,” which drew 10 million viewers across the nation every week.

The CUA collection is home to Archbishop Sheen’s “positio,” a huge, two-volume collection of all the documents concerning his ongoing sainthood cause. This includes letters between the prelate and St. John Paul and information on the miracle attributed to Archbishop Sheen in 2010, among other things.

The collection also houses his complete FBI files, in which it is clear that the archbishop wielded enough public sway to cause a stir, and sometimes a memo to the president, whenever he started talking about the Germans or the Soviets. The collection is open to the public by appointment.

About a mile away from the Sheen collection is a full-on shrine to St. John Paul, operated by the Knights of Columbus. Impossible to miss, a sizable chunk of the building’s front facade bears a brilliant banner of the beloved pope looking out over the road with his familiar, friendly smile.

This statue, by artist Chas Fagan, re-creates a scene from the Oct. 7, 1979, Mass that St. John Paul celebrated on the National Mall. Fagan captures that October day, right down to the notable breeze that swirled the pope’s robes animatedly around his ankles.

Inside the shrine, Redemptor Hominis Church and the Luminous Mysteries Chapel’s glistening mosaics invite visitors in for Mass. But the true treasures of the shrine lie on the bottom floor in the “Gift of Love” exhibit, which takes visitors on a tour through St. John Paul’s life, telling his story through photos, videos, artifacts and documents.

The exhibit houses artifacts such as his shepherd’s staff, both his sets of robes — the simple cassock and formal chasuble — and others.

But the Capitol’s Catholicity is not confined to “Little Rome.” A 10-minute walk from the U.S. Capitol, on the corner of Second and C streets, the dark brown steeples of St. Joseph’s Church peek through the buildings and trees.

An influx of German immigrants to D.C. in the 1860s decided that they needed to build their own Catholic church in the heart of the capital. In 1868 a group of 20,000 Catholics paraded out to lay the cornerstone for what would become St. Joseph’s on Capitol Hill.

Now, 150 years later, it is the go-to parish for Catholic members of Congress.

Around the same time, on the other side of D.C. near Dupont Circle, another church began to develop. St. Augustine Church, founded by a group of emancipated slaves, was the first African American Catholic Church in the city and is called the mother church for black Catholics.

Originally, the group of free and emancipated African Americans met in the basement of what was then St. Matthew Church because they were not allowed to worship in the nave of the church with white parishioners. Eventually, they built their own church, St. Augustine, along with the one of the first black Catholic schools in the Washington Archdiocese.

Upon entering the church, it becomes immediately clear that the thriving community hinges on music. In the sanctuary of the church, just in front of the altar, a sleek, grand piano and microphone take center stage, and off to the left a drum kit stands ready for duty.

St. Augustine’s continues to advocate for and commemorate African Americans in the church today.

These monuments commemorate the stories of only a few of the religious figures that helped shape the U.S. and the world. Some others include the Temperance Fountain, the statue of Bishop John Carroll at Jesuit-run Georgetown University, statues of St. Damien in the Capitol and of Moses in the Supreme Court and the Library of Congress, and countless others that D.C. visitors can spend time exploring at their leisure.