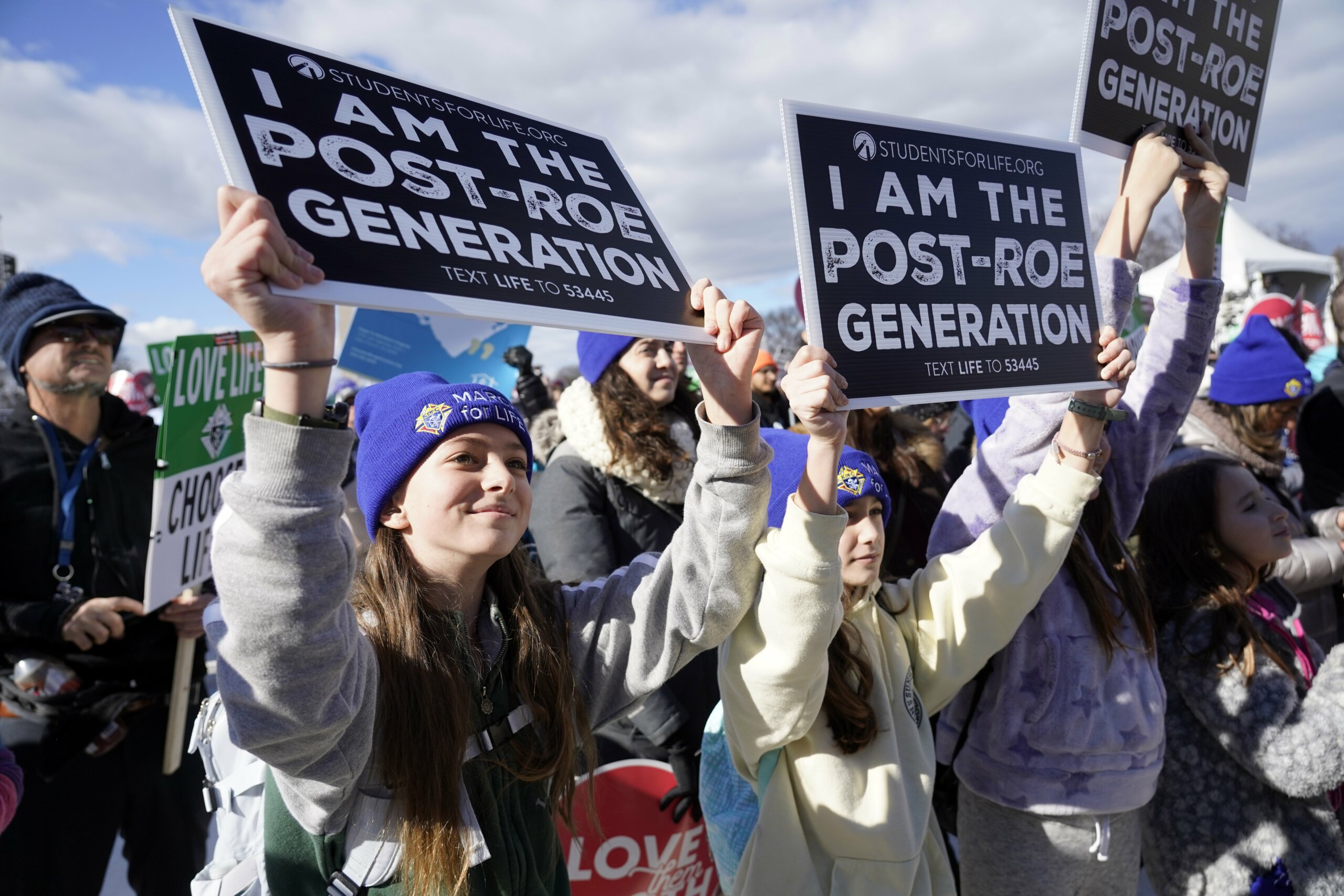 ‘We are not yet done’: March for Life holds first national event after overturn of Roe v. Wade

Tens of thousands of pro-life advocates descended upon the nation’s capital for the 50th March for Life Jan. 20 — the first national march since the overturn of the U.S. Supreme Court’s 1973 Roe v. Wade decision that initially prompted the annual demonstration.

Standing on the event stage at the National Mall, with the U.S. Capitol visible in the background, Jeanne Mancini, March for Life president, told attendees at a rally prior to the march that “the country and world changed” when Roe was reversed in June 2022. But she said the annual March for Life would continue in Washington until abortion is “unthinkable.”

The march took place on a sunny and unseasonably warm day in Washington. A headcount of attendees was not immediately available, as the National Park Service does not release crowd size estimates.

The national March for Life first took place in Washington in 1974 in response to the Roe decision legalizing abortion nationwide the previous year. The protest has taken place in Washington each year since, with a smaller-in-scale event during the COVID-19 pandemic in 2021.

The 2023 event was the first national March for Life since the high court’s June 2022 ruling in Dobbs v. Jackson Women’s Health Organization that overturned Roe and returned the matter of regulating or restricting abortion to state legislatures.

At the pre-march rally, the Christian band “We Are Messengers” performed, followed by a number of speakers, including Jonathan Roumie, known for his role as “Jesus” in the television series “The Chosen,” former Indianapolis Colts Head Coach Tony Dungy, Democratic Connecticut State Rep. Trenee McGee, and Gianna Emanuela Molla, the daughter of St. Gianna Beretta Molla. Canonized in 2004, St. Gianna gave her life for Giana Emanuela, choosing to move forward with her fourth pregnancy even after doctors discovered a tumor in her uterus.

Molla told the rallygoers that she thanks her “saint mom” for the gift of life. “I would not be here now with all of you if I had not been loved so much,” she said.

Roumie took a picture of the crowd behind him from the stage, telling marchers to tag themselves on social media, and quipping he is the “TV Jesus,” not the real one.

“God is real and he is completely in love with you,” he said, adding that each person is individually loved by God.

The rally also featured some lawmakers from the U.S. House of Representatives. Rep. Chris Smith of New Jersey, a Catholic Republican and co-chair of the Congressional Pro-Life Caucus, said at the rally, “Future generations will someday look back on us and wonder how and why a society that bragged about its commitment to human rights could have legally sanctioned” abortion.

“The injustice of abortion need not be forever, and with your continued work and prayers, it will not be,” Smith said.

Prior to speaking to the sea of pro-life marchers on the National Mall, Mississippi Attorney General Lynn Fitch, who argued the Dobbs case before the Supreme Court, told OSV News that “empowering women and promoting life” were the next steps post-Roe.

“Some of the things that we’re talking about in Mississippi and promoting legislation on are workplace flexibility options, particularly for mothers,” she said. “We lose young mothers because they don’t have any options. They don’t have that flexibility. We’ve got to have childcare. It’s got to be affordable, accessible and quality.”

Fitch said she wants to see the pro-life movement do “some heavy lifts” to push laws enhancing child support enforcement and reforming the adoption or foster care systems.

“(These systems) are failing our children; they’re broken,” Fitch said. “We’ve got to make those (changes) happen and put those children in these loving families.”

Speaking with OSV News at the march, Kristan Hawkins, president of the pro-life group Students for Life of America, said the next front of her organization’s activism will focus on fighting the spread of medication abortion. Hawkins said the pro-life movement should also focus on broadening the social safety net and its remaining goals at the federal level, such as stripping Planned Parenthood, the nation’s largest single abortion provider, of taxpayer funds.

“We’re walking and running and chewing gum all at the same time,” she said.

“There is a lot for us to do as a nation, especially raising awareness among its citizens,” Isalyn Aviles Rodríguez, who came to the march from Miami, told OSV News. Rodríguez said she was motivated to march because “the nation needs to know that children are part of God’s plan from conception until natural death.”

As in prior years, the March drew teenage advocates for life as well. Angeline Moro, 14, from Trenton, New Jersey, attended the event to learn how to raise her voice in defense of the most vulnerable.

“We all need to have a chance to live,” Moro said.

At various events leading up to the march, pro-life advocates joined together in prayer and solidarity.

At the Jan. 19 opening Mass for the annual National Prayer Vigil for Life, the night before the march, Bishop Michael Burbidge of Arlington, Virginia, said in his homily that the pro-life movement has “much to celebrate” because Roe v. Wade “is no more.”

But, he added, a “new important phase” for the cause of life “begins now.”

“Our efforts to defend life must be as tireless as ever” not only to change laws but also hearts “with steadfast faith in the grace and power of God to do so,” said Bishop Burbidge, chairman of the U.S. Conference of Catholic Bishops’ Committee on Pro-Life Activities.

The event, held at the Basilica of the National Shrine of the Immaculate Conception in Washington, drew between 6,000 and 6,500 people, with most of the congregation filling the Great Upper Church. Dozens also viewed the Mass via screens in the lower level of the basilica.

Archbishop Christophe Pierre, apostolic nuncio to the U.S., read a message from Cardinal Pietro Parolin, Vatican secretary of state, issued on behalf of Pope Francis, who imparted his blessing on all those participating in the March for Life.

“His Holiness trusts that Almighty God will strengthen the commitment of all, especially the young, to persevere in their efforts aimed at protecting human life in all its stages, especially through adequate legal measures enacted at every level of society,” the message said.

The Mass was followed by a “Holy Hour for Life” at the basilica, which launched a series of Holy Hours of Eucharistic devotion throughout the night in dioceses across the country. Auxiliary Bishop Joseph L. Coffey of the U.S. Archdiocese for the Military Services celebrated Mass at 8 a.m. Jan. 20 to close the vigil.

Meanwhile, hundreds of teens and young adults from the Archdiocese of Washington gathered at the Cathedral of St. Matthew the Apostle for the Youth Mass of Celebration and Thanksgiving for Life, where homilist Father Robert Kilner of Solomons, Maryland, urged them to be “witnesses to life, witnesses to the truth that every life matters.”

“Pray and be confident that God can and will do great things,” he said. “Witness by the way you love your family, and especially the smallest, most helpless around you. Witness by your words in defense of the unborn, witness to God’s mercy, inviting everyone back to the joy of confession.”

Cardinal Wilton Gregory of Washington, the principal celebrant of the Mass, said it was “a special joy for me to be able to celebrate this Eucharist with you, our young, youthful, joyful, happy Church.”

Across town, at the Entertainment & Sports Arena in Washington’s Congress Heights neighborhood, another new pre-march event welcomed a sold-out crowd of pro-lifers. Sponsored by the Sisters of Life and the Knights of Columbus, the early morning Life Fest drew some 4,200 people — most of them teens and young adults — for a program of prayer, worship music, and personal testimonies that concluded with Eucharistic adoration and Mass.

“The law has changed … (but) hearts need to change toward advancing a culture of life in this nation,” Sister of Life Mariae Agnus Dei told OSV News. “Some of the biggest battles are in front of us.”

Celebrating “the gift of life and the beauty of the human person” is essential to that task, she said.

The thousands of attendees at these events then streamed into the National Mall, where they assembled at the noon rally and prepared to begin marching an hour later.

With the overturn of Roe, organizers had planned for a reworked march route, resulting in a new final destination: the East Front of the U.S. Capitol, symbolizing the movement’s new goals. However, restrictions on the use of sticks for signage put in place by the U.S. Capitol Police after the Jan. 6, 2021, riot at the Capitol resulted in the route instead passing by the West Front. For the 50th time, the national march ended in the same spot: before the steps of the U.S. Supreme Court.

Morgan Ehlis, a student from the University of Mary in Bismarck, North Dakota, told OSV News that being in Washington with “like-minded people” was an “overwhelming experience.”

“I’m grateful to be pro-life,” said Ehlis. “It’s swimming upstream for sure, but (this is a) big support group we have.”