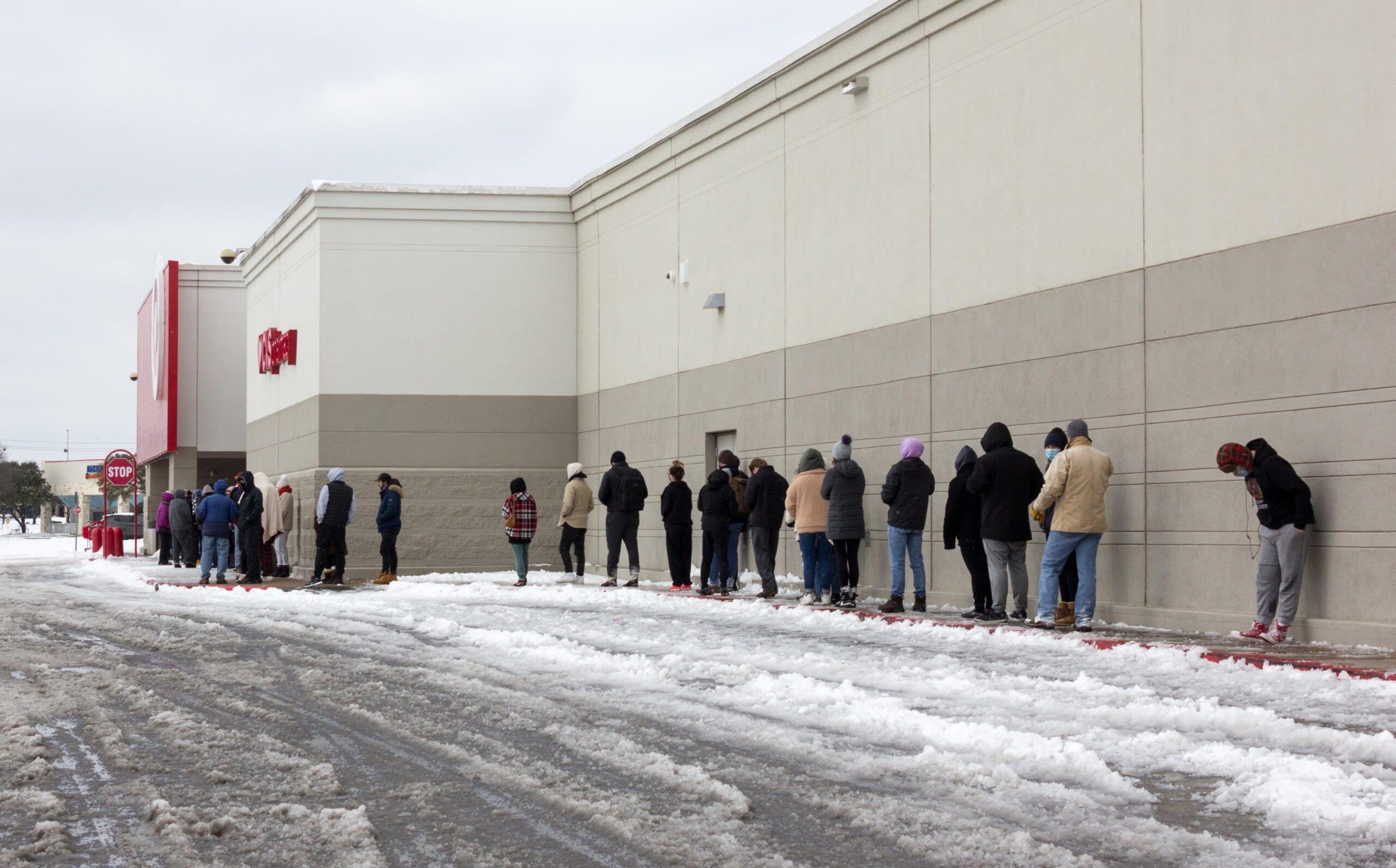 Photo Credit: CNS/Isabelle Baldwin - People wait in extremely cold temperatures outside a Target store in Austin, Texas, Feb. 16, as thousands neared the 48-hour mark of being without power. The South Austin location was the only Target open in the city. Unreachable for many due to hazardous roads, neighboring residents traveled up to two miles by foot to get there.

Despite the grip the historic winter storm had on north Texas, faith fueled outreach to Catholics and other community members in the Diocese of Dallas.

“It’s an opportunity for us to provide to our parishioners in any way we can,” Dallas Bishop Edward Burns said. “We recognize that we have to do church differently these days.”

Winter weather that left millions without electricity and produced record-breaking temperatures blasted the region the week of Feb. 15.

According to The Associated Press, state officials said surging demand, driven by people trying to keep their homes warm, and cold weather knocking some power stations offline had pushed Texas’ system beyond the limits.

A number of parishes planned to distribute ashes at the end of Sunday Masses Feb. 21.

Most campuses across the diocese were closed, according to Matt Vereecke, diocesan superintendent of Catholic schools.

“While we have the opportunity to move to remote learning, we made the determination that with the rolling blackouts and frigid temperatures, the most important thing was to allow families the freedom and flexibility to be safe,” Vereecke told The Texas Catholic, the diocesan newspaper. “We are hopeful that we will be able to be fully back up and running by Monday of next week.”

In addition, the University of Dallas campus in Irving was closed several days with online learning also canceled due the rolling blackouts.

While the storm affected everyone in north Texas, some were impacted much more than others, said Dave Woodyard, CEO of Catholic Charities Dallas, who noted that more than a few of the agency’s employees were either without power, water and/or stranded by distance and unable to help.

Catholic Charities’ immediate response mostly was limited to caring for residents in its two St. Jude Centers, which offer permanent supportive housing for 104 seniors; ongoing efforts to house homeless people impacted by COVID-19; and housing more than 100 homeless from the streets due to the severe weather.

“The latter two include three square meals a day and the seniors are now getting meal supplements and replacements as well,” he said.

Due to rolling blackouts and other power failures, Woodyard said Catholic Charities, like many, experienced pipe breaks and other cold related issues at some of its complexes.

Despite adverse conditions, he said, some critical elements of service must continue, including providing for the children in the agency’s long-term and transitional foster care and unaccompanied minors residing at its St. Mary’s shelter.

“We are still responding via email and telephone to all immigration calls and inquiries,” said Woodyard, adding that until conditions improve, anything requiring in-person had been postponed. “Food trucks are also halted until the roads are clear and volunteers can meet the trucks for distribution efforts. We will be open and back to helping others as soon as we can.”

Helping those less fortunate, especially during times such as these, fuels the faith of Catholics in the Diocese of Dallas, Bishop Burns said.

“Dallas has been referred to as a city with a soul. Therein lies the opportunity for us to shine, and we shine as a people when we help our brothers and sisters in need,” Bishop Burns said. “In serving them, we serve him (God).”

Several parishes took advantage of that opportunity to serve, including St. Paul the Apostle Catholic Church, which assisted Catholic Charities after one of its facilities experienced an extended power outage on Feb. 15.

“We took in about a dozen people at our parish center, providing them with a warm place to stay for the night,” said Father John Szatkowski, St. Paul’s pastor. “What a blessing for the parish to be able to perform this corporal work of mercy.”

With many of its parishioners coming from nearby neighborhoods, the parish was one of a handful that did hold in-person Ash Wednesday services, though, it offered livestreaming for those who didn’t want to make the commute due to inclement weather.

“Ash Wednesday is an important day in the spiritual lives of many people. It’s a day of turning toward God and repenting our sins,” said Father Cargo, adding that he believed many of his parishioners would have been despondent about missing the service.

“We offered this so that families could have the service in their homes,” he said, “and allow for them to have that spiritual moment and sign of repentance that they were seeking.”

Father Cargo said the parish and rectory had electricity and water throughout the storm, but he knows many of his parishioners were “hit very hard. I’ve heard many stories of people going for countless hours without electricity.”

Even when north Texas starts to thaw out, Father Cargo said their needs will not disappear.

“Frozen pipes could burst. Other issues created by the storm will become more evident,” he said. “I’m currently working with our Knights of Columbus to organize a team who can quickly help the elderly and others in need. We want to be there to help any way we can.”

Father Joshua Whitfield of St. Rita Catholic Church in Dallas praised the way parishioners have been reaching out to not only help one another but also others in need.

“It’s been beautiful hearing from parishioners asking me not only how I and my family are doing but also how others are doing,” said Father Whitfield, adding that he’d been “wonderfully bombarded” with offers to help or to put people up who need a place to stay.

“A wonderful St. Rita family was able to take in an elderly couple for the night, not parishioners just people in need. Volunteers have also called parishioners to touch base and assess needs,” he said.

“It’s times like these when belonging to a community really matters.”