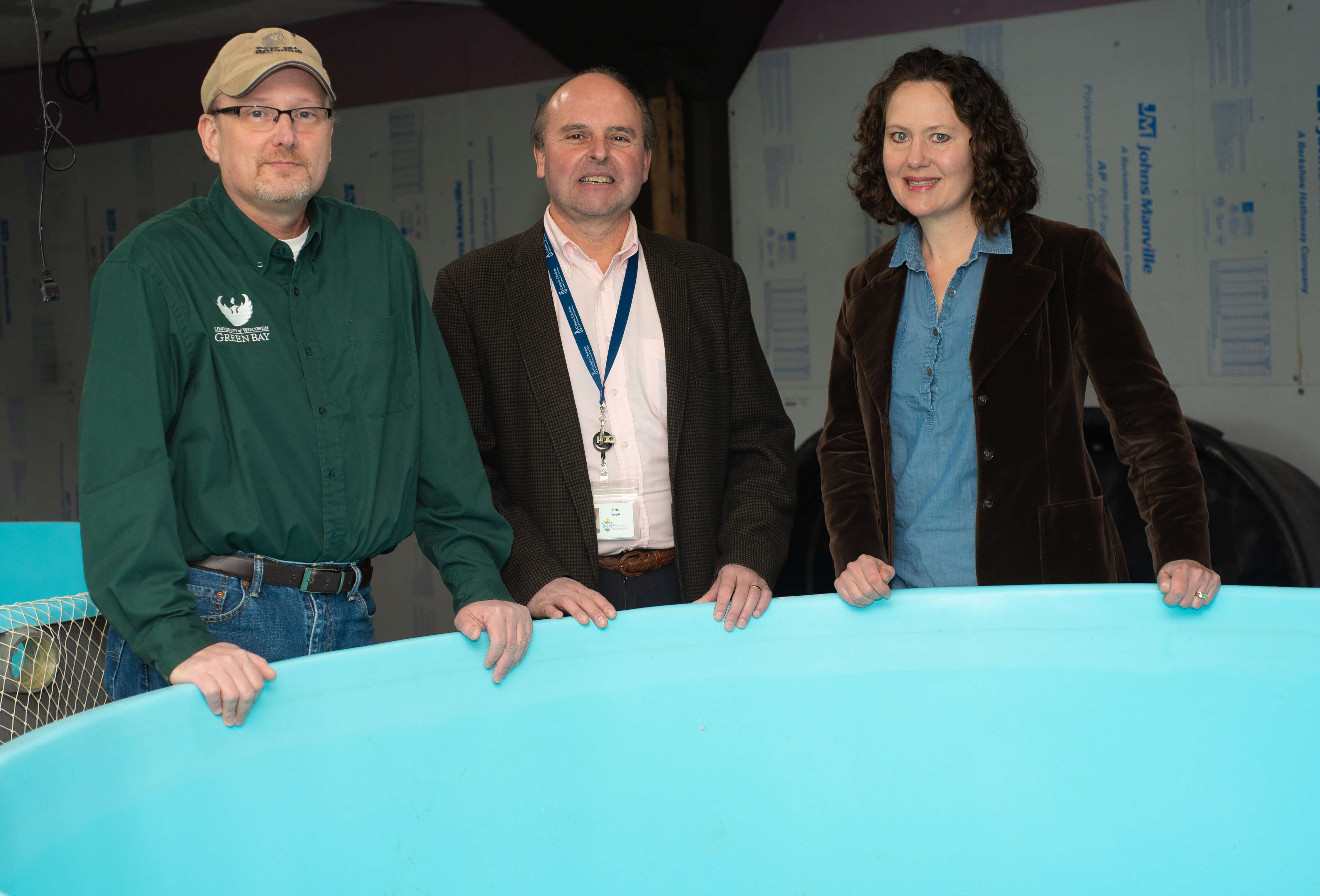 Photo Credit: CNS/Sam Lucero, The Compass - Ken Webb, a research associate with Natural and Applied Sciences at the University of Wisconsin-Green Bay, is seen in February with Eric Weydt, who is Catholic social justice coordinator for the Green Bay Diocese, and Claire Thompson, executive director of The Farmory. They are standing next to an aquaponic tank where yellow perch will be harvested. The Farmory project has received $145,000 in grants over the last three years from the U.S. bishops' Catholic Campaign for Human Development.

With CCHD help, The Farmory raises fish, helps people out of poverty

Perch — it’s a mainstay of the Friday night fish fry in northeast Wisconsin, especially during Lent.

But who knew that the perch also could provide a leg up to people striving to work their way out of poverty.

Eric Weydt, Catholic social justice coordinator with the Diocese of Green Bay, had a hunch and he was right. It was Weydt who encouraged a community endeavor called The Farmory to apply for a Catholic Campaign for Human Development grant. As a result, The Farmory has received grants over the past three years totaling $145,000 from the U.S. Conference of Catholic Bishops’ domestic anti-poverty campaign.

As The Farmory tells visitors to its website, farmory.org: “We want to model sustainable ways of growing, eating and living to those around us through education and outreach. We believe that we can strengthen people physically, mentally and spiritually through fresh produce, community service and local education.”

“Science meets social justice” is a good way to describe The Farmory. Inside the 20,000-square-foot building currently under renovation, you’ll find people looking at food production in an old-is-new sort of way.

The Farmory uses a combination of aquaculture, which is the raising of fish, and hydroponics, the soil-less growing of plants, in an ancient method of growing food called “aquaponics.” Simply put, water from the fish tanks fertilizes the plants. The plants soak up the fish-processed nutrients, filtering the water that returns to the fish in a renewable, sustainable cycle. Currently, The Farmory is growing leafy greens and microgreens.

Also under construction at The Farmory is the state’s first biosecure yellow perch hatchery, with spring planned for the first fingerling perch to begin their cycle of life inside the controlled conditions of The Farmory.

Ken Webb, a research associate with the department of natural and applied sciences at the University of Wisconsin-Green Bay, is overseeing the project. As the project progresses, he expects to start spawning matured yellow perch by midyear, growing the first eggs harvested at The Farmory itself into fingerlings.

The plan is for 42,000 of these fingerlings to make their way into The Farmory’s aquaponics systems and be grown to market size. The remainder of the fingerlings will be sold to fish growing operations throughout Wisconsin and the Midwest. He anticipates in about two years area residents could be eating Farmory perch.

“I think it’s important to note that other universities and businesses in Wisconsin are currently producing perch,” Webb told The Compass, Green Bay’s diocesan newspaper. “The fundamental difference with The Farmory is that we intend to build commercial scale fingerling production by producing year-round and we intend to freely pass this information along to other people so they can begin producing fingerlings as well.

“We’re not in the business of making a profit from selling fish,” added Webb. “We are working to produce fish and greens in an urban environment both to show that it can be done and to train those who have never had the opportunity (and help them) enter this field.”

In addition to the science, at its heart, The Farmory is all about making a difference in people’s lives with job skills training and education.

This is being accomplished through the CCHD grants and by partnering with organizations such as NeighborWorks, the Northeast Wisconsin Technical College, UW-Green Bay, Forward Service Corporation, the Volunteer Center of Brown County, Wello and eHub’s Urban Entrepreneur Center.

The Farmory also has two AmeriCorps VISTA volunteers who are completing their national service year there.

The Farmory is just behind NeighborWorks, which provides local leadership in community development, housing revitalization and innovative homeownership solutions. They owned the building that most recently served as an armory and 100 years ago was home to a mineral springs bottling plant that closed in the early 1940s.

NeighborWorks’ initial plan was to renovate the armory into housing, but its original construction didn’t make this practical. That’s when people got creative and The Farmory was born.

There are multiple goals to the project:

— Providing the community with locally sourced aquaponic food and teaching them how to grow it themselves.

— Increasing the numbers of yellow perch which have been in decline since the introduction of the Zebra mussel.

At any one time, The Farmory has about 60 volunteers.

According to Claire Thompson, executive director of The Farmory, the CCHD grants have helped pay for a variety of training opportunities for both volunteers and staff. That includes eHub’s proven entrepreneur training, which has helped launch over 900 businesses locally.

Thompson offered one example of a Farmory success story and how the CCHD grants have made a difference.

A few blocks away from The Farmory, a young woman who was “very low income,” said Thompson, was working multiple part-time jobs, attending Northeast Wisconsin Technical College and raising a son on her own. She began attending many of The Farmory’s outreach seminars along with her son.

Eventually, the volunteer was trained to attend to the aquaponics system. When she completed her college degree because of the professional experience she had gained at The Farmory, Thompson said she was able to write the volunteer “an outstanding letter of recommendation.”

It led to a water quality analysis position in Madison, Wisconsin. Today, the former volunteer makes $47,000 a year in a career spawned by The Farmory.

“That to me is mission fulfillment. … That’s what this is about: giving people opportunities,” said Thompson.

It’s an exciting endeavor, added Weydt, with The Farmory and CCHD having “a common focus of trying to eradicate poverty.”