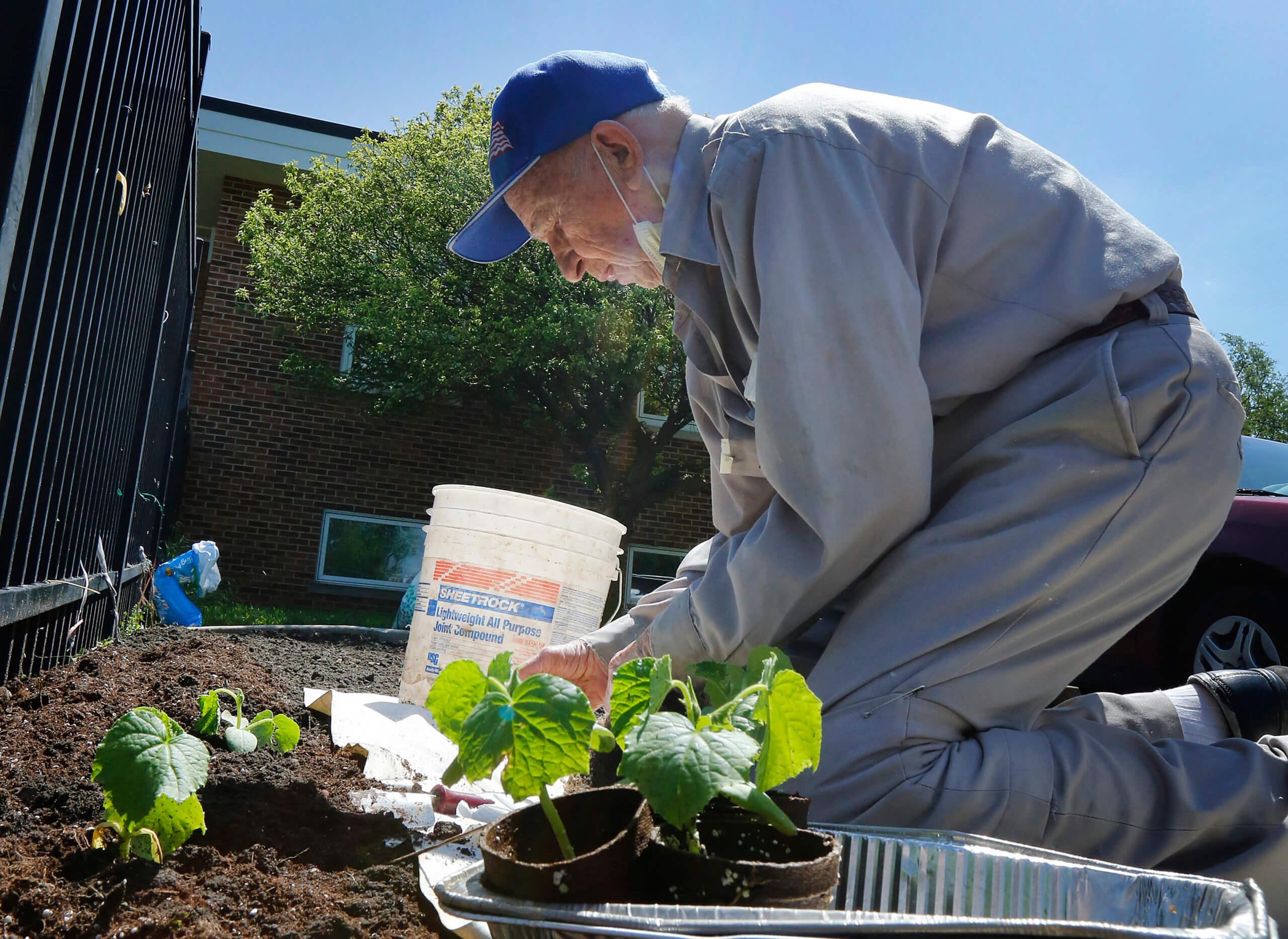 Photo Credit: CNS/Karen Callaway, Chicago Catholic - John Surufka, 97, plants cucumbers in one of the gardens at St. George Church in Tinley Park, Illinois, in May 29. The vegetables are donated to the Tinley Park Food Pantry.

John “Jay” Surufka knows a lot about growing things because he has been doing it for 90 years.

The 97-year-old World War II Army veteran said that’s what his family did when he was growing up in Harvey, a suburb south of Chicago.

“At that time, people didn’t have all of the things they have today. You raised your food,” Surufka said. “My dad said, ‘If you want a nice lawn, learn to eat grass. If you don’t want to eat grass, then you have a garden.’ That’s how it was.”

He is one of 13 children — two died during the Spanish flu pandemic.

Surufka continued gardening when he and his wife bought their own house in Harvey. They grew fruit trees along with vegetables in the garden. His wife has since passed away and for the past 17 years, he’s worked with Father Ken Fleck in the gardens at St. George Parish in Tinley Park, not far from Harvey.

People always have been surprised at how he can seemingly grow anything anywhere, he said.

“This all comes from experience,” Surufka told the Chicago Catholic, newspaper of the Archdiocese of Chicago.

Just ask him about gardening and he’ll tell stories of picking onions on farms in South Holland, Illinois, with his family when he was younger, earning money while doing it. He’ll tell you how to make compost for your gardens and how to use grass clippings for mulch. He’ll tell you about the large tomatoes, peppers and cucumbers he has grown — not to mention giant pumpkins.

He also likes to cook and bake ,and his chili has taken second place in two cookoffs. At St. George, he has his own patch where he grows cucumbers.

“Every morning he will be out here on his hands and knees with this Army shovel from World War II combating the weeds,” Father Fleck said. “The weeds don’t stand a chance. This will be the cleanest garden you’ll see in Tinley Park.”

Gardening gives him a chance for exercise and to be out in the fresh air, Surufka said.

“I enjoy it because I live alone. I have no kids at home. I don’t have a job because I’m retired from Butternut Bread,” he said. “It gives me something to do. In the summertime, I’m in the garden before daybreak.”

He also enjoys giving back to the community.

The veteran is an asset to the parish community, Father Fleck said.

“He is a man of deep faith, a man committed to the parish and to his family and his family of faith. He’s also committed to the gardening because he knows that this food goes to people at the Tinley Park Food Pantry,” the pastor said. “He is a living example of what it means to be a man of faith and to put faith into action.”