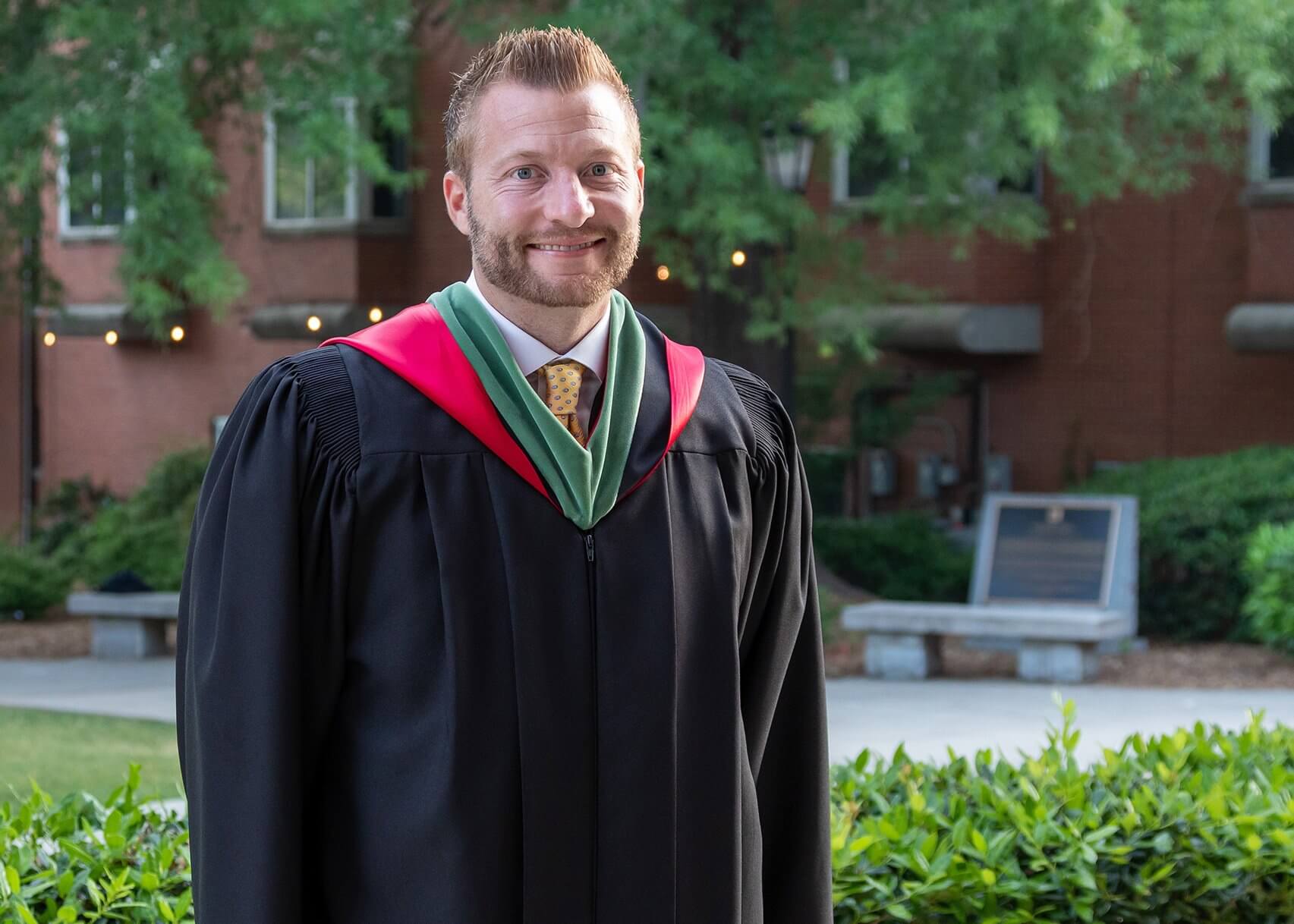 Photo Credit: CNS/Marist School, courtesy The Georgia Bulletin - Los Angeles Rams head coach Sean McVay is seen at Marist School in Atlanta, his alma mater. He was the commencement speaker that day in 2021 and received the school's Distinguished Alumni Award in 2020.

Under the bright lights and falling confetti, surrounded by his team, their families and thousands of fans in SoFi Stadium in Los Angeles, Sean McVay raised high the Vince Lombardi Super Bowl championship trophy Feb. 13.

To win the game feels outstanding, said McVay, head coach of the Los Angeles Rams. The Rams were behind in the third quarter and most of the fourth quarter, before scoring the winning touchdown with 1:25 left in Super Bowl LVI against the Cincinnati Bengals. The Rams won 23-20.

“You talk about a resilient team, coaches, players; I’m so proud of this group,” said McVay in postgame comments. “We talk about competitive greatness all the time, being your best when your best is required.”

McVay, 36, the youngest head coach to win a Super Bowl championship in NFL history, is a graduate of Marist School in Atlanta. He gives the Catholic school a lot of credit for instilling in him many “foundational principles” he said have been instrumental in his achievements.

Marist is an independent Catholic college preparatory school owned and operated by the Society of Mary. It is the oldest Catholic secondary school in the Atlanta area.

During his five seasons with the Rams, McVay has led the team to five consecutive winning seasons, two Super Bowl appearances and now a Super Bowl championship.

“Marist is a special place because of all the unique people,” McVay said to the 2021 Marist graduating class at their guest speaker. “I’ve been so fortunate and blessed because there’s so many of the foundational principles that were instilled in me from the time I got here, from seventh grade to 12th grade, that have been instrumental in a lot of the things that have been good in my life.”

The school honored McVay with the Distinguished Alumni Award in 2020.

McVay gravitated to football from soccer in eighth grade at Marist, following the footsteps of three McVay generations.

His father, Tim, played football at Indiana University in Bloomington. His grandfather, John, was vice president and director of football operations for the San Francisco 49ers from 1979 to 1995 and was inducted into the team’s Hall of Fame in 2013.

Alan Chadwick, head football coach at Marist for more than 40 years, described McVay as explosive, agile and competitive as a Marist player.

“He brought great intensity to his preparation, workouts and had tremendous understanding of the game,” said Chadwick.

McVay was a four-year starter and quarterback his junior and senior year while playing for the Marist War Eagles. In 2003, he led the football team to a state championship and was named the Georgia AAAA Offensive Player of the Year. McVay was the first player in the school’s history to rush and throw for 1,000 yards in consecutive seasons.

Atlanta Auxiliary Bishop Joel Konzen, who was principal of Marist School while McVay attended, remembers him as an easygoing and friendly student.

“The team acknowledged that he was their leader,” the bishop told The Georgia Bulletin, newspaper of the Atlanta Archdiocese. “Sean gave most of the credit to his teammates for a win, making light of his own contribution. That kind of modesty was how Sean demonstrated his commitment to the Marist Way.”

After graduating from Marist in 2004, McVay attended Miami University where he played wide receiver. In 2007, he received Miami’s Scholar Athlete Award and graduated with a bachelor of science degree in health and sports studies in 2008.

While coaching for Washington, it was apparent that McVay was going to be a good coach, said Chadwick.

McVay was promoted twice, eventually becoming Washington’s offensive coordinator. In 2016, he coached the offensive unit to record breaking statistics for the franchise.

McVay was named head coach for the Los Angeles Rams in 2017. At 30, he was the youngest NFL head coach in history. The Associated Press named McVay the Coach of the Year in 2018 — the youngest head coach to ever receive the award.

Three years ago, McVay made his first Super Bowl appearance as head coach for the Rams against the New England Patriots when the game was hosted in Atlanta.

Chadwick and McVay have kept in touch over the years. After the Rams won the NFC championship game against the 49ers Jan. 30, Chadwick reached out to his former player to wish him luck in the Super Bowl.

“He’s done extremely well for himself and should continue to do that for many years to come,” said Chadwick.