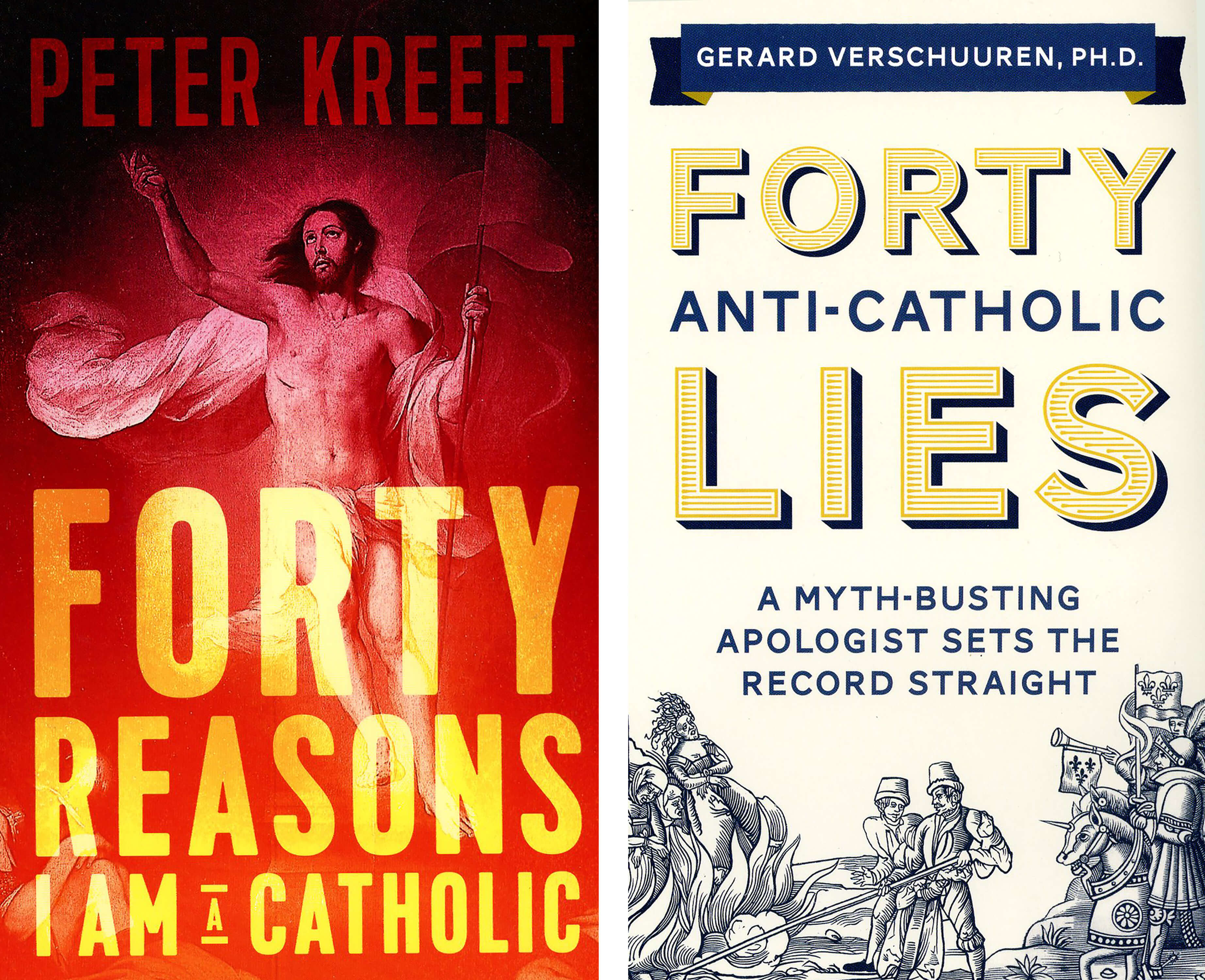 Photo Credit: CNS - These are the covers of "Forty Reasons I Am a Catholic" by Peter Kreeft and "Forty Anti-Catholic Lies: A Myth-Busting Apologist Sets the Record Straight" by Gerard Verschuuren.

Well-known philosopher and author Peter Kreeft and apologist Gerard Verschuuren both adopt simple yet at times challenging approaches to the truth of the faith. The short chapters and simple language make their books accessible to a variety of readers, from recent converts to those wanting to better present their beliefs to the perplexed.

As apologists, both authors directly address contemporary post-Christian culture and the frequent biases and accusations against the church. Yet they do so without maligning anti-Catholics. They thus model a powerful way to carry out St. John Paul II’s new evangelization.

Kreeft’s “Forty Reasons I Am a Catholic,” more personal than “Forty Anti-Catholic Lies,” given Kreeft’s reference to his own Catholic journey, addresses a wide range of issues, including secular society, infallibility, purgatory and Catholic community.

Though it surveys a wide range of topics, “40 Reasons I’m a Catholic” does address the essential issue of Scripture and tradition in some depth. The author argues convincingly that certain Protestant views of scriptural primacy are not only historically untrue but also illogical, concluding: “The church was both the efficient cause (the author) and the formal cause (the definer) of the New Testament.”

His confidence in the church never wavers. If the church’s claim about Jesus is wrong or untrue, “how to account for her wisdom, her holiness (her saints), her survival, and her fidelity to Christ’s teachings through 2,000 years of history?” This book adds a welcome dimension to Kreeft’s scholarly output.

Verschuuren’s wide-ranging “Forty Anti-Catholic Lies” presents a more scholarly and challenging argument. Despite the variety of topics covered, like Kreeft’s book, it never confuses or veers off topic. The chapters are assembled into seven broad themes including “Catholicism and the Bible” and “Catholicism and Science.”

The author addresses Protestant concerns more than those of non-Christians, such as pointing out the “biblical” nature of Catholic spirituality.

Other areas of contention addressed include historical events or realities often turned against the Catholic faith, including the Galileo affair, the Crusades, and the Inquisition. Regarding the latter, the author reminds readers of how attacks on the Church often depend on erroneous argumentative techniques, such as the fallacy of judging the past by today’s standards: “What methods did the Inquisitors use? They basically used methods that civil courts would also use at the time.”

Verschuuren also addresses the exaggerated claims often made against the Church: “Modern researchers have discovered that the Spanish Inquisition applied torture in 2 percent of its cases. Each instance of torture was limited to a maximum of 15 minutes. In only 1 percent of the cases was torture applied twice, and never for a third time.”

The author says the “gruesome lists of instruments of torture” that we have all heard of were post-Reformation fabrications.

Readers will come to see that many of our Christian brothers and sisters have abused the truth in a centuries-long anti-Catholic campaign. Perhaps “40 Anti-Catholic Lies” can therefore be seen as an attempt at a painfully necessary aspect of ecumenism, where Catholics need to address biased Protestant perspectives with robust correctives.

Some topics are fun to read, such as the chapter on apparitions. The prudent and even meticulous way ecclesiastical authorities deal with these reflects the Church’s important protective function. The Church prevents its members from getting caught up in harmful and even evil movements yet tolerates a wide range of practices, beliefs and communities. Apparitions can help Catholics “to enrich, deepen, or strengthen their faith.”

Perhaps surprising to some, the author observes that “the Catholic Church does not easily give in to what some consider a spiritual need of Catholics for ‘special’ visions, revelations, and apparitions.”