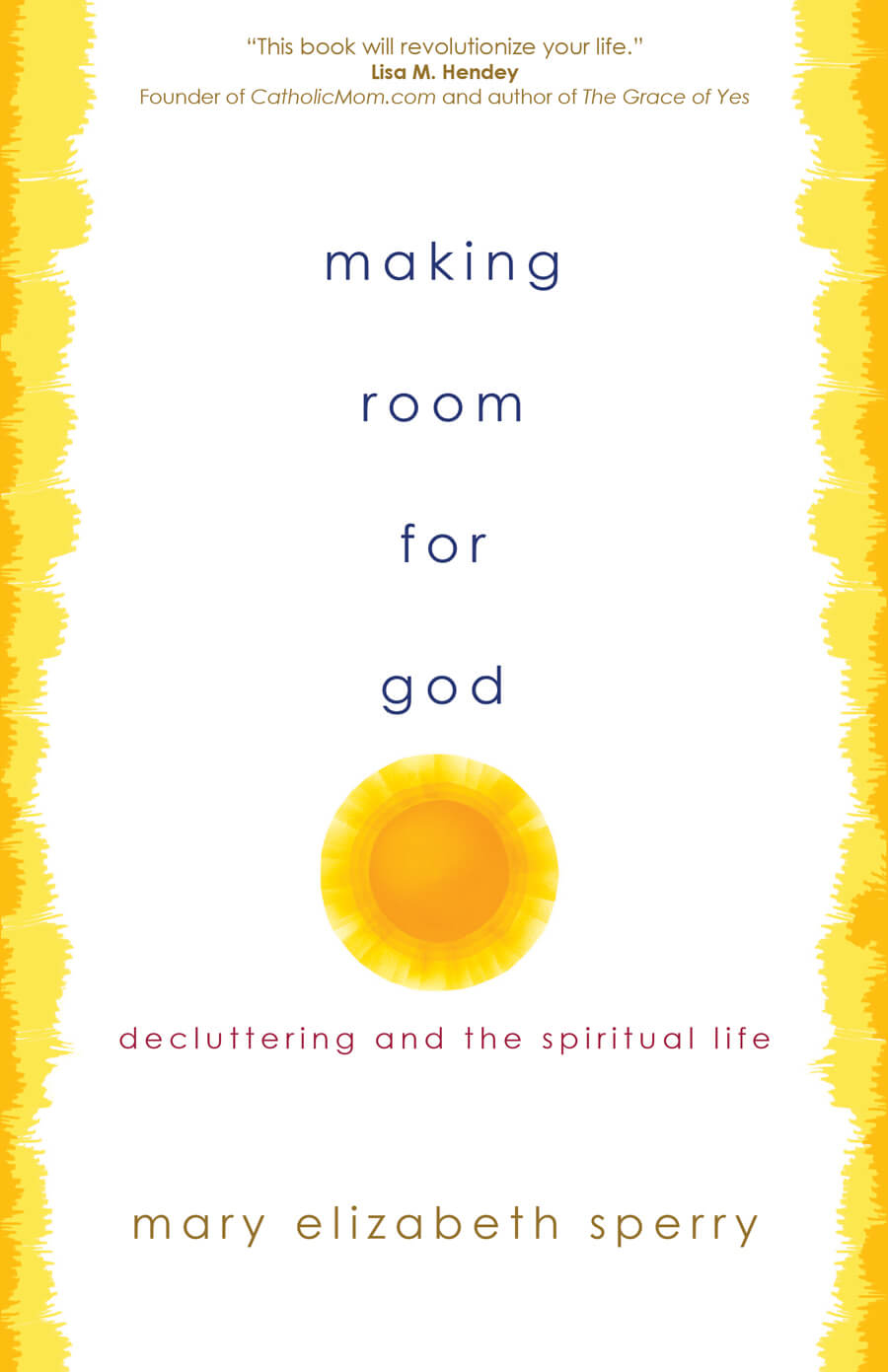 Most readers (except the most tidy) will likely see themselves somewhere on the “clutter spectrum” that Mary Elizabeth Sperry describes in her new book, “Making Room for God: Decluttering and the Spiritual Life.” I certainly do, and having engaged in decluttering binges in the past — either my own or someone else’s — I can honestly say that much of the nuts and bolts information about “taming your stuff” can be found in other places like books, magazine articles or online. Where Sperry’s approach differs, however, is that she manages to find a spiritual dimension in what most of us see only as a dreaded chore.

The first chapter of the book is utterly practical: if it causes so much agitation, why bother decluttering in the first place? Sperry quickly gives us four very good reasons. First, a clutter-free space is easier to keep clean; second, a clutter-free space is more efficient because we will not have to waste time looking for things we have misplaced; third, it will ultimately save money because we will not be repurchasing things we already own but can’t find; and finally, a clutter-free space reduces stress, for all of the reasons already mentioned. At this point, we really haven’t encountered anything here that hasn’t been mentioned in roughly 2,000 other books on the subject.

Then comes chapter two. This is where Sperry begins to look at our “stuff” in light of God’s plan for each of our lives. She begins with a word that does not have a good connotation for most of us: materialism. (Think of how you felt last Christmas, for instance.) However, Sperry doesn’t advocate divesting ourselves of absolutely everything; what she does do is make a distinction between “evangelical poverty,” such as that practiced by vowed religious, and the kind of “poverty” to which the average person is called. “Having possessions, even lots of possessions, isn’t bad in and of itself,” Sperry says. “It’s our relationship with those possessions that matters…(and) the proper relationship with possessions is described as stewardship…(and) stewardship—the right relationship to things—liberates us from being possessed by our possessions.”

In chapter three, she shows how clutter can actually be a near occasion of sin, if we let it. What she says goes very much against the grain of what the advertising industry would have you believe; unfortunately for us, we are inundated on a daily — or even hourly basis — by all the people who tell us that “if a little is good, more is better.” In theological terms, we call this “greed” and “gluttony.”

“Retail establishments understand the tendency to greed and gluttony,” Sperry says. “That’s the marketing theory behind most of the sales I see. Buy-one-get-one offers generally don’t save me money. They entice me to buy more than I need, thinking that I’m getting a better deal.”

In the remainder of the book, Sperry outlines how the Church already has an antidote to clutter and all its downsides, and it is very familiar to us: prayer, fasting and almsgiving. If we learn to live a little bit of Lent all year long, we can begin to put our “things” into their proper perspective. Then we are free to enjoy the goods of the world as they were meant to be enjoyed — as gifts from the hand of a loving God.

“Defeating clutter and living a Christian life both require living by values that are very different from those most lauded in our culture,” Sperry concludes. “Defeating clutter means changing our relationship with material things, moving from possessiveness to detachment. In an economy based on continual purchasing where the newest and biggest is best, declining to shop and being content with what we have are radical acts.”

Mary Elizabeth Sperry has worked for the United States Conference of Catholic Bishops since 1994. She earned a master’s degree in liturgical studies from Catholic University of America and a master’s degree in political science from the University of California, Los Angeles. She speaks about the Bible and a variety of spiritual topics in Dioceses and parishes throughout the United States. Sperry lives near Washington, D.C.