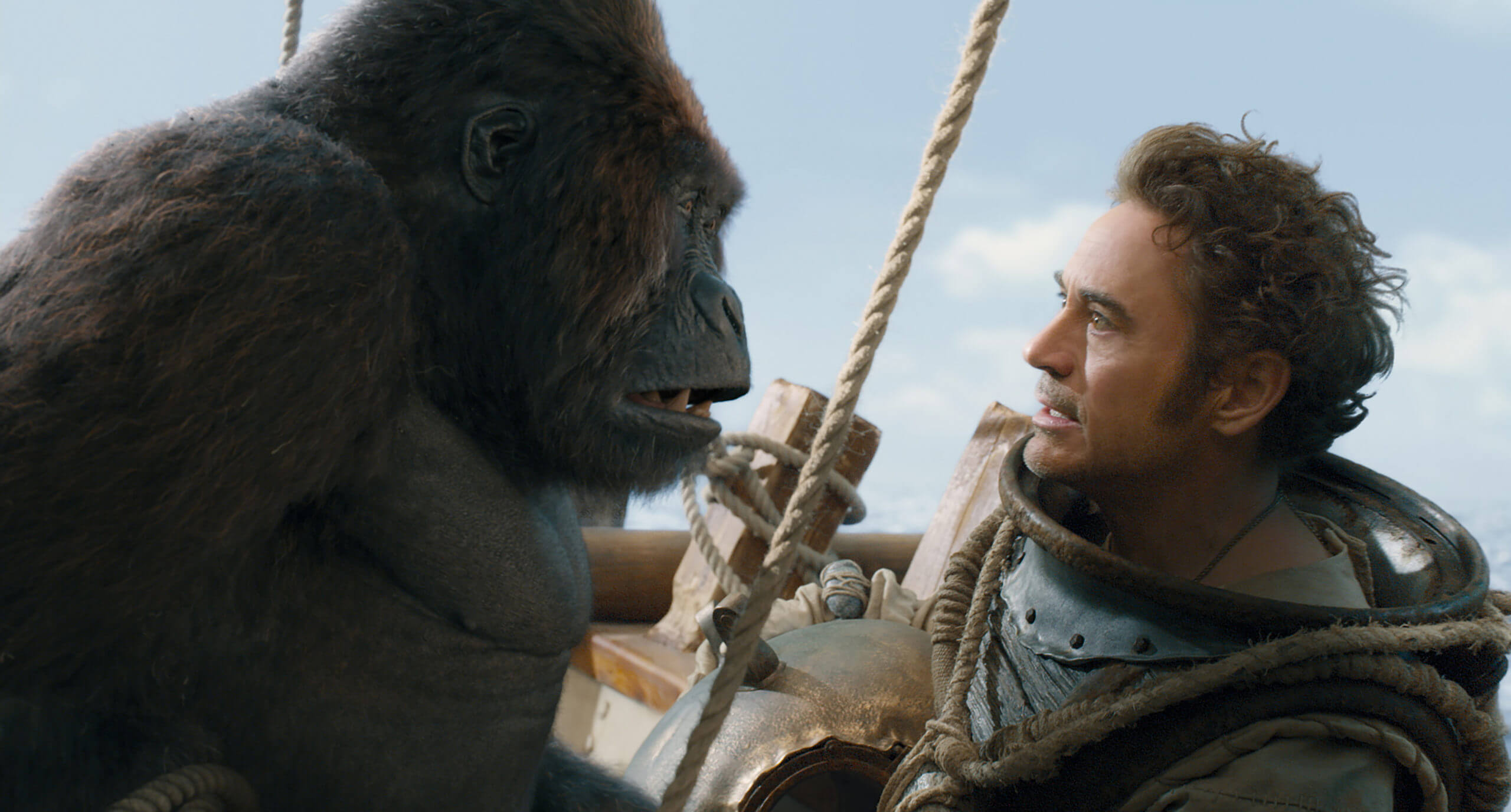 Photo Credit: CNS/Universal - Robert Downey Jr. and a gorilla named Chee-Chee star in a scene from the movie "Dolittle."

Exactly a century ago, British author Hugh Lofting published “The Story of Doctor Dolittle,” the first in a long series of books for children that have won lasting popularity for their protagonist, a physician-turned-veterinarian who has, need it be said, the unique ability to communicate with the critters he treats.

Film adaptations followed, beginning with a 1967 musical with Rex Harrison that was a financial disaster on release but remains lodged in the consciousness of many a baby boomer. Eddie Murphy took on the role in two movies at the turn of the millennium, and three direct-to-video sequels without Murphy stretched the franchise out to 2009.

Now cometh Robert Downey Jr. to star in and executive-produce “Dolittle” (Universal). This take, helmed by Stephen Gaghan and scripted by Gaghan, Dan Gregor and Doug Mand, is a chaotic comic adventure, colorful, jaunty but unfocused and somewhat slipshod.

Things begin on a solemn note as a flashbacks recount Dolittle’s doomed romance with, and marriage to, courageous explorer Lily (Kasia Smutniak). Her loss at sea turns the devastated widower into a recluse. Seven years later, however, he’s called out of seclusion by the unexpected arrival of two visitors.

One is young Lady Rose (Carmel Laniado), an attendant from Buckingham Palace who brings the news that Queen Victoria (Jessie Buckley) is gravely ill and needs Dolittle’s ministrations if she’s to survive. Since the monarch’s death would mean the loss of the idyllic animal sanctuary she granted him for her lifetime, Dolittle hurries off to London.

This trip turns out to be an opportunity for Dolittle’s other uninvited guest, Tommy Stubbins (Harry Collett).

The animal-loving scion of a family of hunters, Tommy initially came seeking Dolittle’s help in curing a squirrel named Kevin (voice of Craig Robinson) whom he had accidentally shot while trying not to take down one of the ducks his clan were stalking. Having seen Dolittle at work, however, Tommy soon decides he wants to serve as his apprentice. Misanthropic Dolittle at first rebuffs the lad but later relents.

Once at the palace, Dolittle discovers that someone has poisoned the sovereign’s tea. Since the only antidote is the fruit of a mystical tree on a far-off, uncharted island, he and Tommy embark on a seafaring quest to acquire it.

They’re joined by Dolittle’s eccentric menagerie of creatures great and small, the most prominent being his chief adviser, a wise parrot named Polynesia (voice of Emma Thompson) who doubles as the story’s narrator.

The proceedings that follow amount to an amiable mess — well-intentioned, but silly and disorganized. Having apparently decided that his character is Welsh, Downey channels the voice, if not the genius, of the late Richard Burton.

Michael Sheen all but twirls his mustache as Dolittle’s villainous rival, Dr. Blair Mudfly, Antonio Banderas smolders ominously as another of our hero’s antagonists, piratical King Rassouli, while Jim Broadbent is stiff-as-a-board courtier Lord Thomas Badgley. Cartoonish about covers it.

Some of the sequences are too frightening for small ones, and there’s a bit of grown-up joking to accompany the inevitable potty gags. But otherwise worrisome elements are minimal. Thus parents and teens willing to demand little will find themselves satisfied with “Dolittle.”

The film contains stylized action and physical violence, characters in peril, a couple of mild oaths and brief scatological and anatomical humor. The Catholic News Service classification is A-II — adults and adolescents. The Motion Picture Association rating is PG — parental guidance suggested. Some material may not be suitable for children.