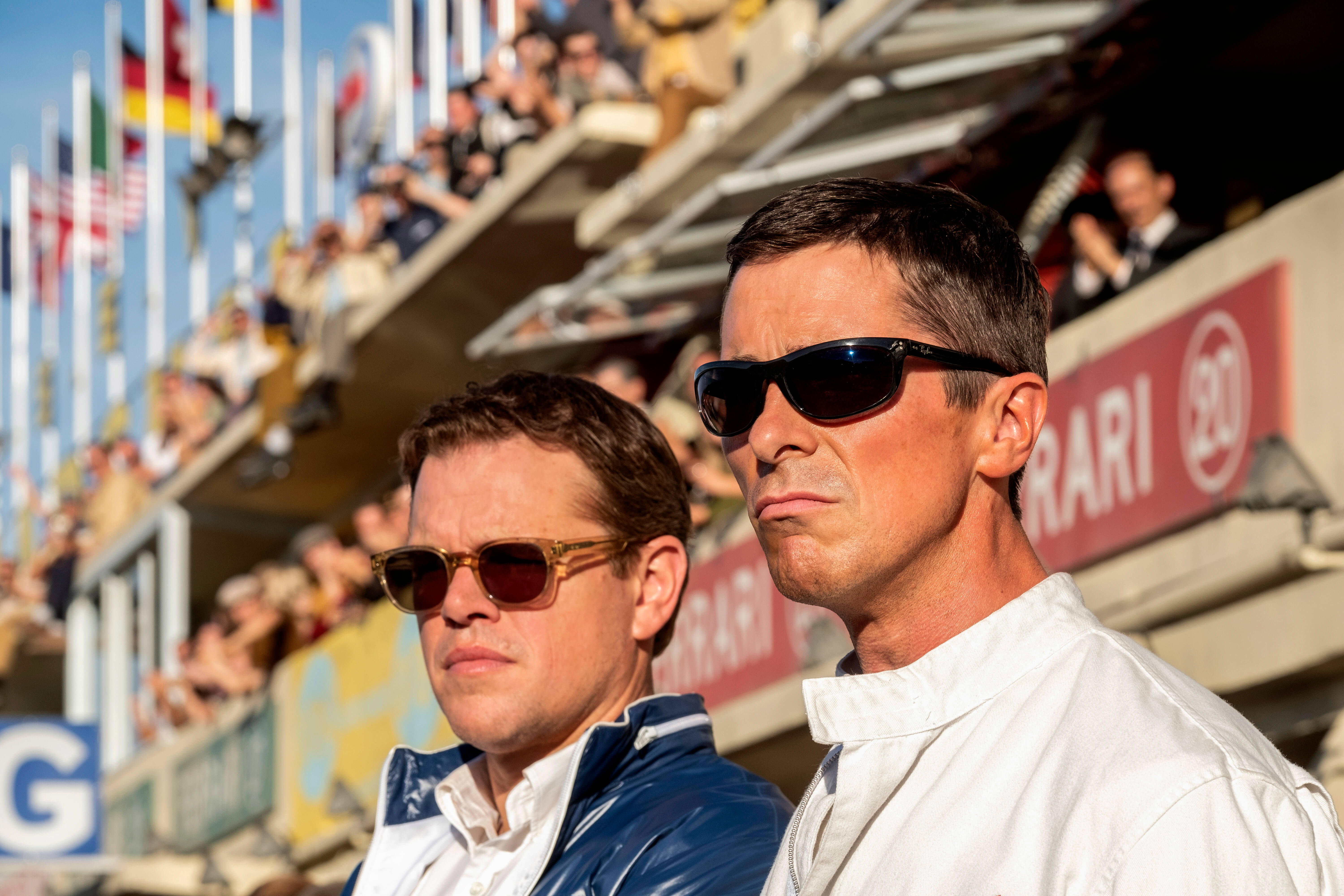 “Ford v Ferrari” (Fox) revels in its 1960s gender stereotypes, evoking a “Great Man” age of auto racers in which the men were men and the women glad of it.

The historical truth of that is, of course, far more complex. But this film doesn’t try to justify old inequalities. Ties and lapels are skinny, tires squeal, engines roar, vintage sunglasses are everywhere — and death lurks around every sharp turn.

It’s a groaning board of vroom-vroom cliches, but told without cynicism, and with some moral core to the principal characters.

Director James Mangold, working from a screenplay by brothers Jez and John-Henry Butterworth and Jason Keller, keeps the story stripped down to the competition between automakers Ford and Ferrari to have their cars win the grueling 24-hour Le Mans road race in France, which Ford finally accomplished in 1966.

It’s the kind of film in which Henry Ford II (Tracy Letts) and Lee Iacocca (Jon Bernthal) are major players. And it’s all about sexy muscle cars designed to appeal not to the generation that came from World War II, but their baby-boomer offspring.

Ford gets so upset that his stodgy sedans (Fairlane, anyone?) are being overtaken in sales by the Chevrolet Impala, he shuts down one of his assembly lines to chew out the workers — as if they’d had anything to do with design, engineering or marketing.

Iacocca’s solution is to tell Ford, “Kids today, they want glamour. They want sex appeal. They want to go fast.”

Iacocca designs the new Mustang and suggests, in 1963, that Ford go into international auto racing, where the sex appeal is. (Domestic stock-car racing was then downmarket and exclusively Southern, with echoes of moonshine running.) He also recommends a partnership, through a takeover bid, with Italian automaker Enzo Ferrari (Remo Girone).

But Ferrari not only betrays Ford by letting Fiat buy his bankrupt company, he insults Ford’s honor by proclaiming that he’s not up to his grandfather’s legacy. So Ford, his manhood on the line, solemnly announces, “I’ll spend whatever it takes. I want the best engineers and the best drivers.”

The car developer is swaggering Carroll Shelby (Matt Damon), the last American to race at Le Mans. He has since been hobbled with a bad heart valve. The driver is the British daredevil Ken Miles (Christian Bale), who is forever in debt because although he wins races, he seldom makes much money out of it.

This, then, is a heroic saga, told in the familiar, old-fashioned but lustily entertaining way, of cowboy-like heroes battling their demons, plotting to win a big race and keeping all the arrogant corporate boys from Detroit at bay while developing an intense personal bond.

Both Shelby and Miles have to keep their considerable egos in check when Ford executives change drivers on their team. Reaching goals requires compromises, after all.

Salty dialogue makes this most fitting for grown-ups. But mature teens may also be given the green light — provided they really enjoy now-vintage automobiles.

The film contains intense action sequences, fleeting crude and crass language and a single racial slur. The Catholic News Service classification is A-III — adults. The Motion Picture Association of America rating is PG-13 — parents strongly cautioned. Some material may be inappropriate for children under 13.