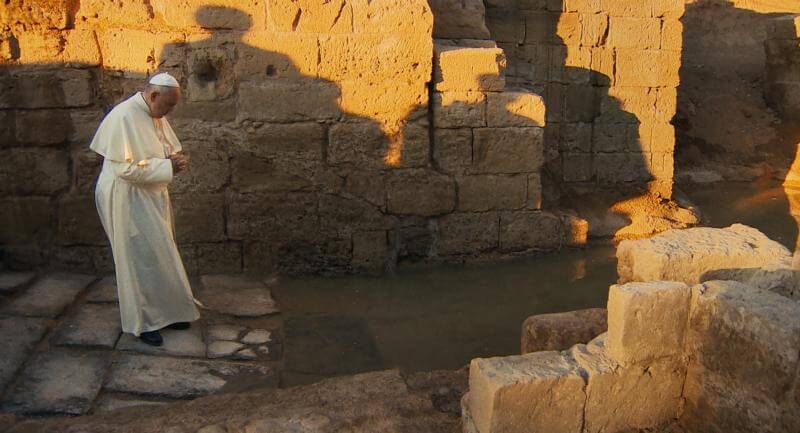 Photo Credit: (CNS/Focus) - Pope Francis stars in a scene from the documentary "Pope Francis: A Man of His Word." The Catholic News Service classification is A-II — adults and adolescents. The Motion Picture Association of America rating is PG — parental guidance suggested. Some material may not be suitable for children.

Movie Review: ‘Pope Francis: A Man of His Word’

Veteran filmmaker Wim Wenders respectfully profiles the current successor of St. Peter in the well-crafted, sometimes moving documentary “Pope Francis: A Man of His Word” (Focus). Though Wenders also provides some narration, as his title suggests, he largely lets the pontiff speak for himself.

That approach pays off by allowing the audience to hear Francis’ views on a wide variety of topics of interest to believers and nonbelievers alike. These include the environment, the situation of young people, relations with the Islamic world, economic inequality and the clergy sex abuse crisis. Francis also sets out, in a general way, his vision for the future of the church.

Along with original interviews with the pope conducted at the Vatican, Wenders incorporates footage of his worldwide travels, which have included trips to North and South America, Africa and, closer to home, Greece and the southern Italian city of Naples. We also see Francis answering questions from youngsters and, in a particularly touching scene, offering encouragement to the inmates of a prison.

Francis brings warmth to this grim setting and draws an emotional response from its presumably tough inhabitants by reminding his listeners that Christianity’s very first saint was the Good Thief. Moments like that one give viewers an insight into the personality, thinking and global influence of the first pontiff in the long history of the church to hail both from the New World and from the Society of Jesus.

Wenders also dwells on the significance of another precedent-breaking choice, that of the papal name Francis. Luminous images of Assisi and an outline of the life of its most famous son provide context for what his medieval namesake likely represents to the 21st-century pope.

While Wenders is unstinting in his appreciation of Francis, he sometimes misguidedly attempts to highlight this pope’s qualities by contrasting them, at least implicitly, with what he perceives to be the shortcomings of Francis’ predecessors or of some members of the hierarchy. Thus the lavishly decorated public rooms of the Apostolic Palace are rather naively set out as unspoken evidence that previous popes liked to “live large.”

Overall, nonetheless, this is a work of high quality that can be recommended for a wide range of age groups. Much of the discussion would be over the heads of small children, of course. And they might also be disturbed by the tragic images that accompany Francis’ reflections on one of the subjects closest to his heart, the plight of refugees.

For older kids, by contrast, “Pope Francis: A Man of His Word” will make educational viewing, whether seen in the company of parents or teachers. And, once released on video, the movie will provide a valuable resource for both schools and parishes.

The film contains mature themes and some potentially upsetting images. The Catholic News Service classification is A-II — adults and adolescents. The Motion Picture Association of America rating is PG — parental guidance suggested. Some material may not be suitable for children.

Share This Post
Pope Francis, Evangelization and Catechesis, Youth and Young Adult, movie reviews, Pope Francis: A Man of His Word
See More
Last Article
How to widen our hearts on Mother’s Day
Next Article
Pope’s Lamborghini fetches nearly $1 million for charity at auction
Back to Vermont Catholic Magazine