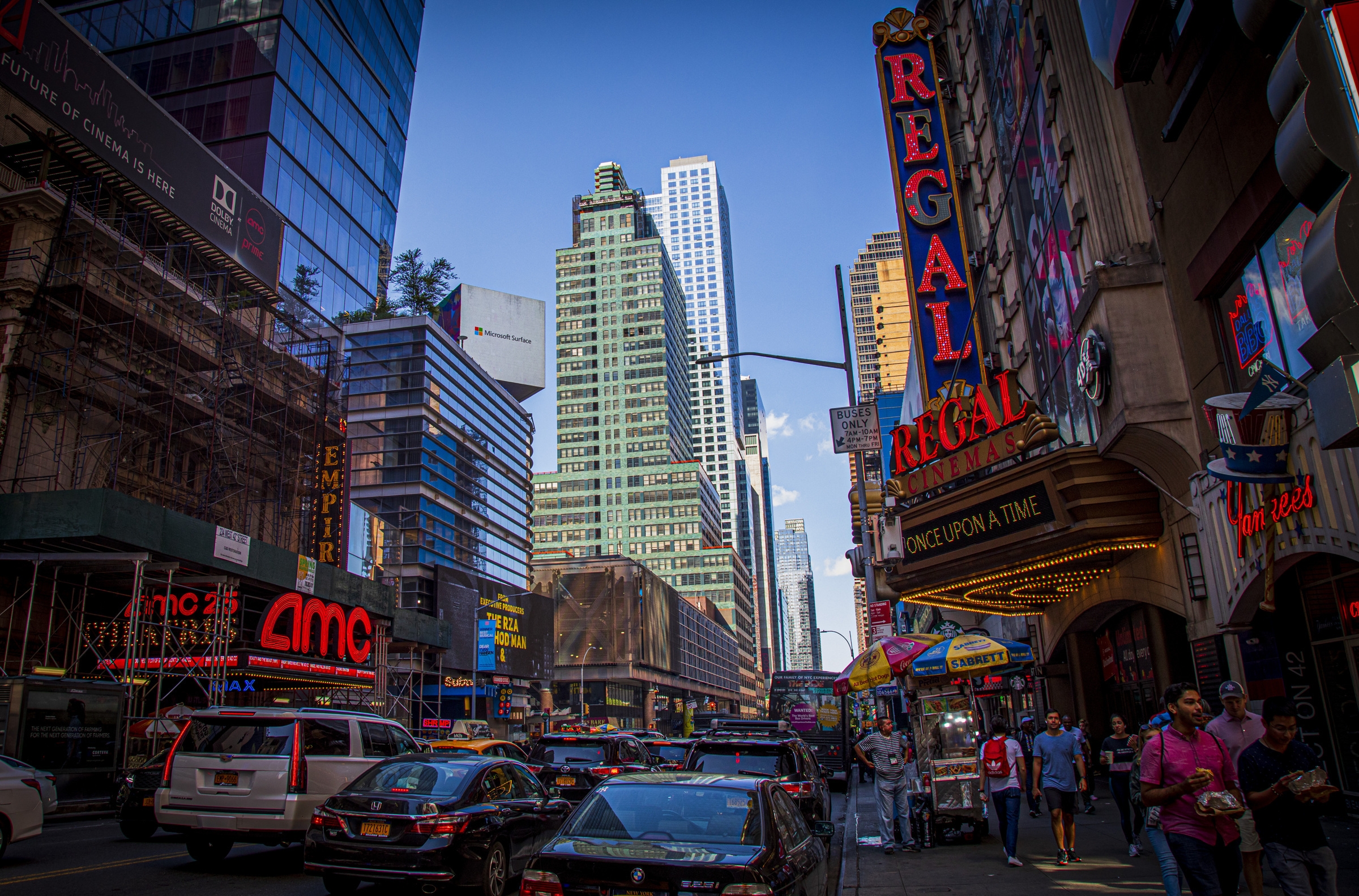 Photo Credit: CNS/Chaz Muth - Pedestrians walk by two iconic movie theaters along New York's 42nd Street -- the Regal and the AMC Empire -- Sept. 15, 2019. Since the 1930s the National Legion of Decency -- which became the National Catholic Office for Motion Pictures and eventually the Media Review Office of Catholic News Service -- had provided ratings to help the Catholic audience understand the moral content of films.

These 1926 films now in public domain

The copyright on all movies released in 1926 has expired and all entered the public domain. Following, in alphabetical order, are capsule reviews of seven of these silent films that are available to view online.

Unless otherwise noted, the Catholic News Service classification of each is A-II — adults and adolescents. None have been rated by the Motion Picture Association.

Visually interesting but somewhat incoherent blend of comedy and mystery in which the masked master criminal of the title, the revelation of whose identity constitutes a climactic plot twist, is on the trail of a cache of money purloined from a bank and hidden in a spooky mansion. The standout among an ensemble cast that includes Jack Pickford as the cashier suspected of stealing the loot is Louise Fazenda, who mugs it up in the role of an easily terrified lady’s maid. But it’s the eerily atmospheric cinematography, presided over by Arthur Edeson with the assistance of a young Gregg Toland, that is likely to stick with viewers of this adaptation of a hit Broadway play directed by Roland West. Be on the lookout for a forerunner of the Bat-Signal of comic book lore. Mostly stylized criminal violence with some images of gore, a racially caricatured character, a couple of bigoted expressions. (archive.org/details/TheBat1926)

Swashbuckling star vehicle for Douglas Fairbanks Sr. He plays a nobleman who infiltrates — and becomes the leader of — the pirate band that killed his father. Along the way to wreaking vengeance on them, he allies himself with a goodhearted buccaneer (Donald Crisp), runs afoul of a villainous one (Sam De Grasse) and saves a captive princess (Billie Dove), for whom he falls at first sight, from a fate worse than death. As directed by Albert Parker, the action sequences are predictably exciting and include Fairbanks’ much-imitated stunt of sliding down the sails of a ship by ripping them apart with a sword. But the pace of other scenes drags and the acting creaks. Considerable stylized violence, brief gore, the implied threat of rape. (archive.org/details/TheBlackPirate1926DouglasFairbanksSRAndy)

Crushed by his inability to help the victims of a plague, an elderly alchemist (Gösta Ekman) strikes a bargain with the devil (Emil Jannings) and, after being restored to youth, seduces a previously pure maiden (Camilla Horn) with tragic results. Director F. W. Murnau drew on German playwright Johann Goethe’s version of the legendary story as well as other sources to produces this masterpiece of expressionist cinema, a superbly creative drama that rivets viewer attention. Mature themes, sacrilegious behavior, implied nonmarital sexual activity. (archive.org/details/FaustF.W.MurnauSilentFilm)

At just 37 minutes, this poignant French drama, helmed by Russian-born Dimitri Kirsanoff, falls well short of feature length. Yet it punches above its weight in emotional impact, technical innovation and lasting influence. After the brutal murder of their parents, two sisters (Nadia Sibirskaïa and Yolande Beaulieu) move from the countryside to the gritty Paris neighborhood of the title where they come under the malignant influence of a deceptive philanderer (Guy Belmont). Eschewing the aid of intertitles, Kirsanoff uses purely visual means to probe the heights and depths of human experience, portraying, in turn, innocence, joy, charity, rage and the edge of suicidal despair. Probably acceptable for older teens. Brief but harsh criminal violence with momentary gore, indistinct images of nudity, mature themes, including seduction and prostitution. The Catholic News Service classification is A-III — adults. (archive.org/details/menilmontant1924-25)

Soviet adaptation of Russian writer Maxim Gorky’s novel tells the bleak tale of an impoverished mother (Vera Baranovskaya) and son (Nikolai Batalov) whose lives become even more challenging after he takes part in an illegal strike in the lead-up to the Revolution of 1905. Director Vsevolod Pudovkin waves the red flag in this first film in a trilogy. But he also provides a touching human-interest story about individuals standing up to oppression. Stylized violence with slight gore, a scene of breastfeeding, a few crass expressions. (archive.org/details/Mother_883)

“The Sorrows of Satan”

Director D. W. Griffith’s screen version of Marie Corelli’s 1895 novel is a less-than-subtle morality tale in which, after declaring his willingness to sell his soul to the devil for wealth, a struggling writer (Ricardo Cortez) suddenly meets a suave nobleman (Adolphe Menjou) who brings him the news that he is the heir to a vast fortune. Ditching the cash-strapped girlfriend (Carol Dempster) he earlier seduced and was about to marry, he takes up with a vampy Russian princess (Lya De Putti) but his life in high society proves disillusioning. Though the tone is sometimes overheated and the ethical messaging ham-handed, the simple goodness of Dempster’s character is charming while Menjou deftly projects sinister elegance. Implied premarital sexual activity, a suicide. (archive.org/details/SORROWSOFSATANSilent)

Capitalism is the main target of Soviet writer-director Yakov Protazanov’s satirical comedy, but the church gets poked in the eye along the way. A greedy banker (Mikhail Klimov) agrees to sell his house to a group of worldly monks for the sum of the title, only to have the home infiltrated, within hours, by an elegant jewel thief (Anatoli Ktorov) in search of the cash the clerics paid and a ragged pickpocket (Igor Ilyinsky) who’s only out for valuable trinkets. Adapted from a play by Umberto Notari, the film tries to equate the businessman’s dealings with those of the two criminals while showing the supposed corruption of the clergy. This dull agenda is relieved by some Chaplinesque clowning on Ilyinsky’s part and an amusing conclusion making a broader point about humanity’s frantic scramble for filthy lucre. Antagonistic portrayal of Christianity, irreverent humor, an adultery theme, a vulgar gesture. The Catholic News Service classification is A-III — adults. (youtube.com/watch?v=0OzcQq47NPM)

Share This Post
movies, movie reviews, Silent Films, Douglas Fairbanks Sr.
See More
Last Article
Children at Mass have a lot to teach us
Next Article
For John McMahon, work for the Church is ‘wonderful, storybook blessing’
Back to Vermont Catholic Magazine