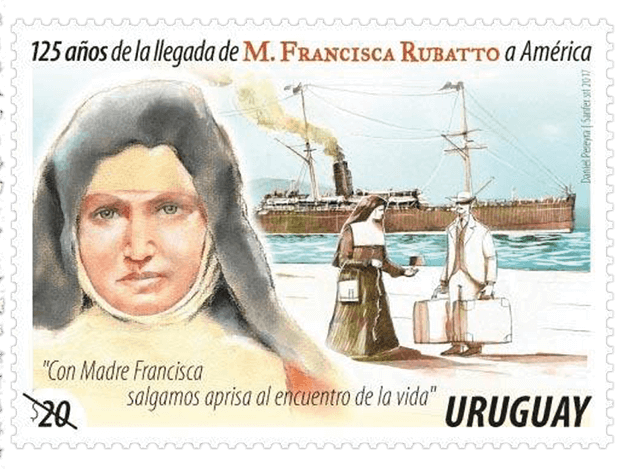 The Church will soon be adding another saint to the Roman calendar; a miracle attributed to Blessed Maria Francesca Rubatto has been recognized by Pope Francis, which cleared the way for her canonization.  She was beatified in 1993 by Pope John Paul II, making her the first person to be declared Blessed from Uruguay.  The Vatican had not yet announced a date for her canonization as of early May, likely due to the difficulty of organizing events amid the pandemic.

Blessed Maria Francesca was born Anna Maria Rubatto in Carmagnola, Italy on St. Valentine’s day, February 14, 1844.  She was only four years old when her father died, and when she was a teenager, Anna Maria received an offer of what would have been a comfortable marriage to a local notary.  She turned him down, however, because as a child, she had made a vow of virginity and was determined to keep it.

When she was 19, her mother also died and Anna Maria, now alone, moved about 18 miles south to the city of Turin. There she befriended an Italian noblewoman named Marianna Scoffone, who recognized the girl’s goodness and soon became her patroness. Though Anna Maria had received little formal education, she was nonetheless an intellectually gifted individual and, with the support of Scoffone, began to teach catechism to the children in the local parishes.  She also visited the sick in the Cottolengo Hospital and generally tended to the needs of the suffering and neglected in Turin.

Anna Maria remained with Scoffone for the next 19 years until the latter died in 1882.  Now 38 years old, Anna Maria’s next vocation would make itself known in a rather unusual way.  One morning after Mass at the Capuchin church in Loano, Italy, Anna Maria was startled by a cry from a nearby convent that was under construction.  A stone had fallen on the head of a young worker and, because of her experience helping with the sick, Anna Maria was able to clean the wound and tend to the young man.

As it happened, the religious sisters who were to live in the building were looking for a spiritual guide and leader.  They discerned that the incident with the young man was the sign they were looking for and a Capuchin priest convinced Anna Maria to enter their community.  A year later she did and took the name Sister Maria Francesca of Jesus.  The local bishop, Bishop Filippo Allegro, soon made her the superior of the order, which became known as the Institute of the Capuchin Sisters of Mother Rubatto.

Under her leadership, the congregation grew, both in Italy and in the New World.  In 1892, they established a mission in Montevideo, Uruguay, as well as in Argentina and deep within the rain forests of Brazil.  In all, Mother Rubatto crossed the Atlantic seven times in order to support her sisters in both Europe and South America and was responsible for opening 18 Capuchin houses in 20 years.

Mother Maria Francesca Rubatto died of natural causes in Uruguay in 1904.  She is buried in Montevideo where she had given so much of herself to the poor.