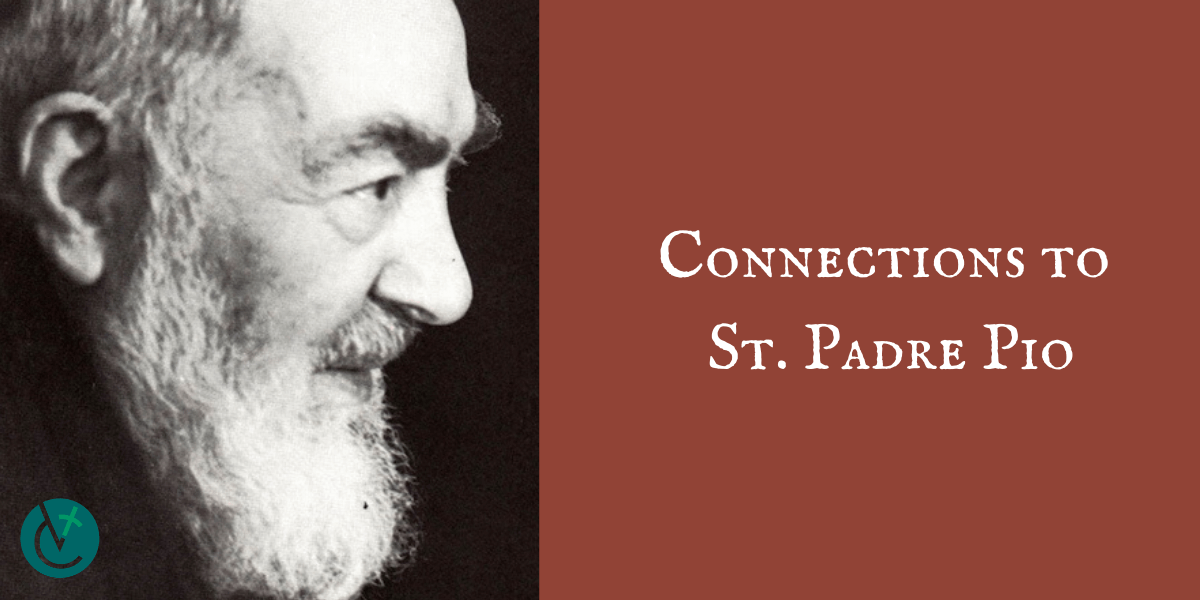 A Vermont priest and a Vermont parishioner share a devotion to St. Padre Pio of Pietrelcina, and each has in his possession something touched by the patron saint of civil defense volunteers, adolescents and the Italian village of Pietrelcina.

Father Jon Schnobrich, pastor of Most Holy Name of Jesus Church in Morrisville and Blessed Sacrament Church in Stowe, has one of the right, brown wool fingerless gloves that St. Pio wore over the stigmata, borrowed from a New York priest friend and custodian of the glove. He was waiting to return it until COVID-19 travel restrictions are lifted.

St. Padre Pio was an Italian priest who was known for his piety and charity and the stigmata.

Stigmata is a term to describe bleeding marks, sores or sensations of pain in locations corresponding to the crucifixion wounds of Jesus.

Tommaso Rendino of St. John the Baptist Church in North Bennington treasures a cancelled check he sent to Padre Pio more than 55 years ago.

Father Schnobrich has shared glove, a second-class relic, at his churches where he celebrated Masses of Hope and Healing and at The Bishop John A. Marshall School in Morrisville where he spoke about Padre Pio and invited students to venerate the relic. He hosted the Padre Pio Prayer Group from Essex Junction for Mass and veneration of the relic and made it available for prayer and veneration at the Catholic Center at the University of Vermont in Burlington.

“I intended to offer something during Lent for people that would remind them during this Year with the Saints that [Burlington] Bishop [Christopher] Coyne initiated for 2020 of how close the saints are to us and how much they love us,” said Father Schnobrich, noting his love for Padre Pio, who has been a spiritual father figure to him.

Ever since the priest was a little boy he was intrigued by the stigmata. “When I had fallen away from the practice of my faith, it was Pio who helped to lead me back to the Church,” he said.

He has been keeping the relic in the rectory chapel in Morrisville. “It’s brought a greater awareness of his story and really awakened people to the stories of grace that God has written through His life,” he said of the glove.

Born Francesco Forgione in 1887 in Pietrelcina, Italy, to peasant farmers, St. Padre Pio was 15 when he entered the novitiate of the Capuchin friars. He took the name “Pio” in honor of Pope Pius I, whose relic he often saw at his local chapel.

Just a few years before St. Padre Pio died, Rendino, who was living in Torrington, Connecticut, at the time, sent a check for $10 to him in Italy; at the time he was making $64 a week before deductions. “I had never heard of him, but there was a lot of chatter about him in the Italian community,” he recalled, explaining that immigrants were learning of him through letters from relatives in Italy.

“I thought he was a marvelous, saintly guy … so I wrote him a check,” he said. “I thought, ‘I’ve got to support this guy” whom he had heard was hearing confessions for hours at a time.

For years Rendino has kept the endorsed check — which has what he believes to be drops of blood from the stigmata —in his Bible. He feels “great reverence” being in possession of something the saint touched. “It’s very moving,” he added, tearing up.

“Pio reminds us that as Christians we have the greatest reason to hope – Jesus Christ,” Father Schnobrich said.