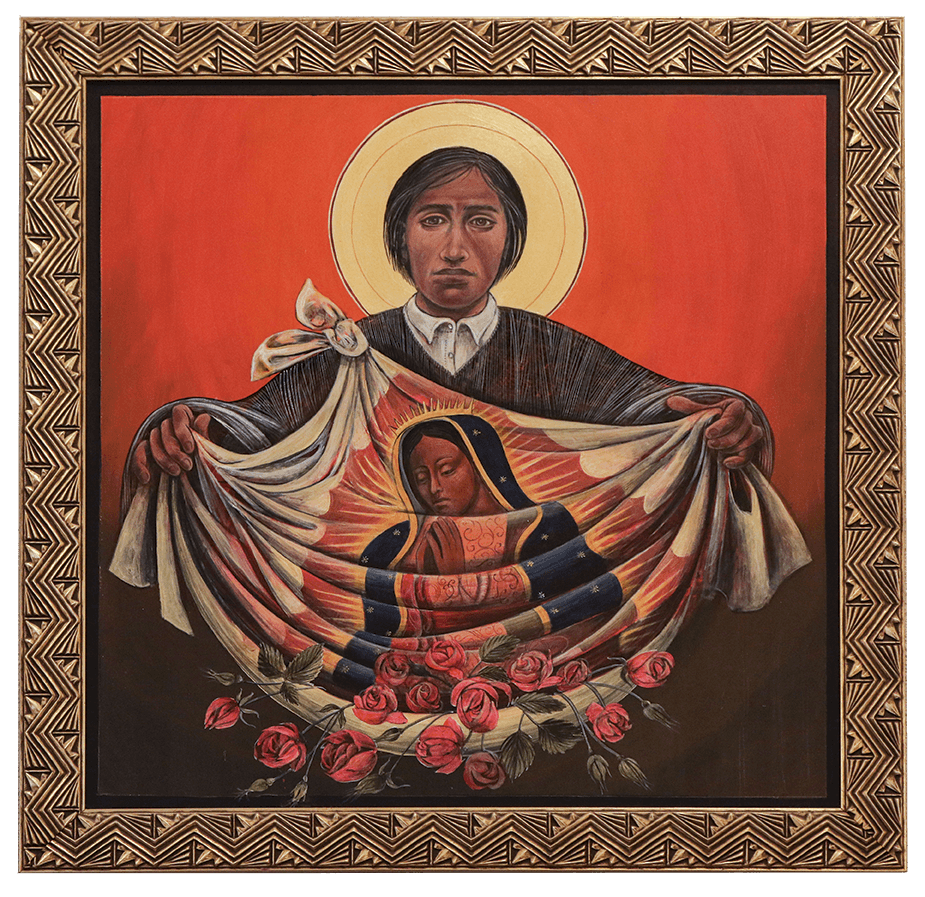 It is somewhat ironic that the first indigenous saint of the Americas, Juan Diego, was given, at birth, the Aztec name Cuauhtlatoatzin, which meant “the eagle who speaks.”  As a Christian convert, it would be this humble “eagle” who Our Lady would choose to speak for her as “the mother of all who live in this land.”

Born in Mexico in 1474, Diego was raised by his uncle after the untimely death of his father.  Although formed in the Aztec faith, he had, from a young age, shown a mystical sense of life, so it was not surprising that he, along with his wife, converted to Catholicism in 1524.  His commitment to his new faith was strong, and it was not unusual for him to walk long distances to receive instruction at the Franciscan mission at Tlatelolco.

Juan Diego’s life was forever changed on Dec. 9, 1531, when, in a hurry to get to Mass, he encountered, on Tepeyac hill, a most beautiful lady, dressed as an Aztec princess.  Addressing him in his native language, she told him that she was the “ever-perfect holy Mary, who has the honor to be the mother of the true God.”  The lady had a favor to ask of Diego; would  he please go to the local bishop and request that he build a “little house,” dedicated to her son, on this spot where a pagan temple had once stood.

Juan Diego hurried to do as the lady asked but, not surprisingly, his request was met with skepticism, and he was dismissed by the bishop.  Disappointed, Diego returned to the lady, suggesting that she choose a more important representative to deliver her message.  The lady, however, reassured him that he was indeed her chosen messenger, and so Diego approached the bishop a second time.

Perhaps more out of impatience than devotion, the bishop told Diego to ask the lady for some sort of sign to prove that she was the Blessed Mother. So Diego went back to Tepeyac hill a third time.  At this meeting, the lady told him to return the next day for a sign that would leave no doubt in the bishop’s mind as to her identity.

But overnight, Diego’s beloved uncle became seriously ill to the point of death.  As Diego was on his way to summon a priest, the lady met him again.  She assured him that his uncle was already well and that he should, instead, gather the flowers that were growing on the hill.  These she arranged in his cloak, or tilma, and Diego hurried to bring this sign to the bishop.

When Juan Diego approached the bishop, he opened his tilma, and a cascade of Castilian roses fell to the floor.  But what caused the bishop and all who were in the room to drop to their knees was the tilma – for on it was the image of the Blessed Mother herself.

The patron of indigenous people, Juan Diego’s feast day is celebrated on Dec. 9.